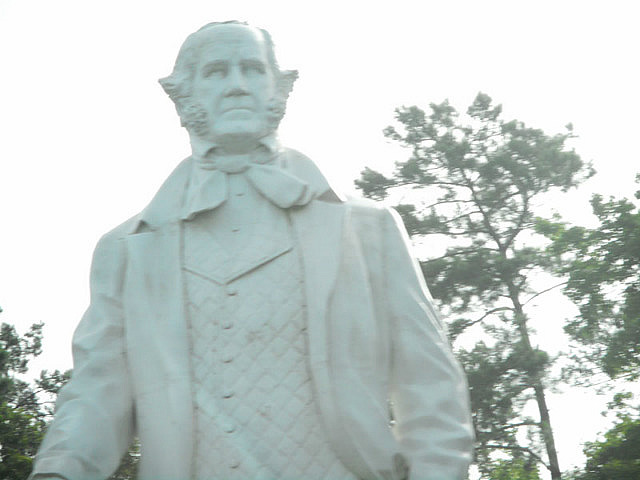 Day One of the honeymoon, and we made it ten hours, in a car, without killing each ourselves or each other,I’d say that’s a pretty good way to start the vacation.It was hard saying goodbye to the kitties, knowing that we wouldn’t see them for a month, and they were upset because they knew that something was up. I miss them already.

We got out of our apartment by six thirtyish, our goal was six o’clock, so that’s pretty good, in my opinion. Packing the car completely took longer than we both anticipated, especially with the game of Tetris we had to play to fit everything.

We hit a little bit of traffic on 45, but that’s nothing new, 45 is a horrible highway, especially around the Houston area,

Highlights of the early trip…

Passing by the Sam Houston Statue near Huntsville, yes that Huntsville, as in Huntsville Prison. Unfortunately, to Justin’s dismay, we missed his favorite road sign other that states “Hitchhikers may be escaped convicts.” 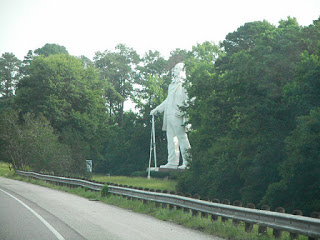 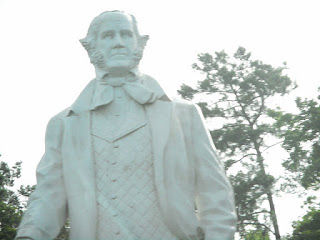 Of course, there’s the huge Bucc-ees near Centerville, TX.

For those of you, who aren’t from Texas, and have never driven through Texas. Bucc-ees is the most amazing rest stop ever. They have huge and clean bathrooms, with so many stalls that there’s never a line, and they’re kind of like tiny little rooms with toilets within the bathroom, so you have all the privacy you need, and it has a very clear Vacant/Taken sign that activates when you lock/unlock the door, so you don’t have people trying to open the doors while you’re doing your business.

They have all sorts of food. They have walls filled with candy, trail mix, dried fruit, popcorn, covered pretzels. There are always at least 12 different slushy flavors. They have huge coolers of drinks with everything from soda to beer and wine. They have a humongous coffee station with about five different coffee flavors as well as five different cappuccino flavors and every kind of flavored creamer you can imagine. They have a whole bakery that makes fudge, cake balls, kolaches, baked goods, and a deli that does everything from BBQ to sandwiches.

Then there’s a whole shopping area dedicated to beaver [Bucc-ees’ mascot] themed everything from pajama pants [which I may be wearing] to towels to stuffed animals. Different Bucc-ees have different themes, for example, the one in New Braufels is dedicated to outdoor stuff like rafts, tubes, and coolers because that’s where tubing is. The one near Galveston has all sorts of beach stuff since Galveston is a beach. The one we went to today doesn’t really have a theme, but it’s awesome nonetheless. 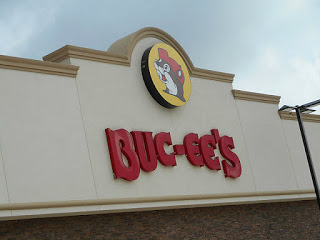 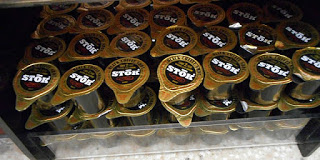 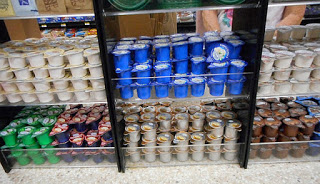 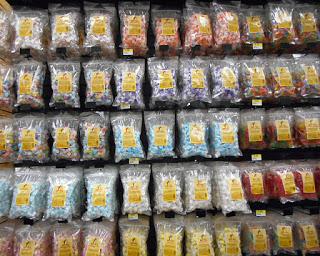 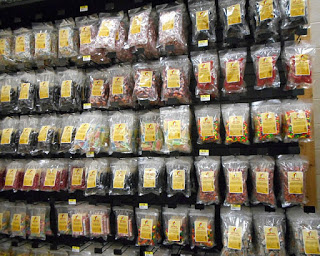 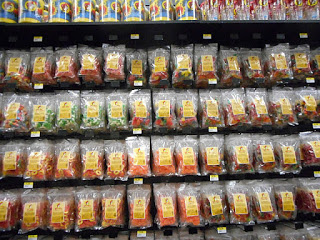 If you ever visit Texas… GO TO A BUCC-EES. You will not be dissapointed.

We also stopped at a random Target outside Dallas because we figured it had cleaner bathrooms then most gas stations and I bought some Peanut Butter Monster trail mix there, which was delicious, but next time, I should probably rethink chocolate in 103 degree weather because most of the chocolate in it melted on my hands.

After about six hours, I attempted to drive. I lasted all of thirty minutes. Within the first twenty seconds I was handed the keys, I managed to swerve and almost kill us both, luckily the road was empty. Driving an SUV is so much different than a normal car. I managed to pull it together after our near death experience, but was mostly traumatized and handed Justin back the keys after thirty minutes. I’ll try again tomorrow. I’ll try to last forty minutes and slowly work my way up to lasting longer on scary highways in a scary car.

Shortly after that, I fell asleep for about an hour… Even non drowsy Dramamine knocked me out though I didn’t get as nauseous after I took it as I had the previous day.

We stopped at a random rest stop that had signs that warned us to look for rattlesnakes and a nifty touch screen Texas Driving Safety game that I did awfully on.

Scenery on the road side included lots of farmland, cows, horses, and more farmland. We passed this nifty machine that is used to water huge farms and Justin thought it was fascinating. There was also an area covered by wind energy generators. The land on the side of the highway was very flat, very green, and there were barely any trees, at all.

I played a bunch of games of Ticket to Ride on my iPad while Justin was driving and did exceptionally well, so maybe I’ll get lucky and beat Justin at it, one day.

It took us about twelve hours with various stops and breaks to get to Amarillo, but overall it wasn’t a bad drive.

We checked into the hotel, settled in the room, then grabbed some subway for dinner, as a healthier alternative to say… Whataburger. Came back, ate dinner, then went to the pool.

We just went to the jacuzzi. There was a huge family, at the pool there and their kids kept on coming into the jacuzzi with us because they were fascinated by the foam, and they kept on asking us questions like… do you have a dad? do you have a mom? do you have any kids? The parents were worried they were bothering us, but we’re both teachers, so we’re used to kids, and we didn’t mind humoring them. After the kids went upstairs, the dad came in the hot tub with us and we had a long conversation about teaching and road trips. The fun part of vacation is all the random people, who you get to talk to, at the various destinations that you travel too.

Then we came upstairs.

So not the most exciting day in the world, but Texas is so freaking huge, that even after twelve hours in a car, we’re not even close to being out of the state, but we’re getting there.

So that was Day One.

Overall, an okay day, not the most exciting day, but a necessary day. 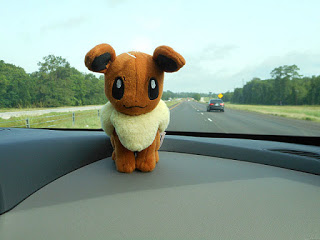 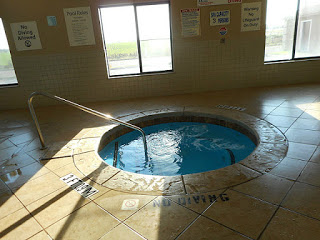 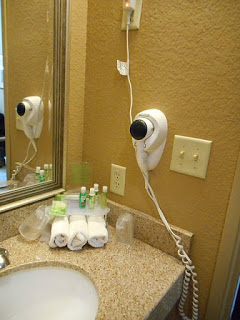 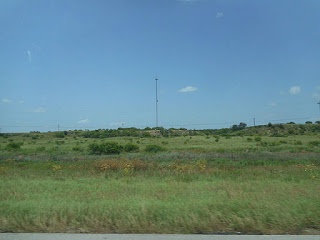 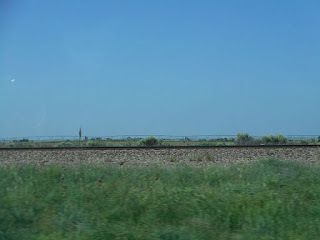 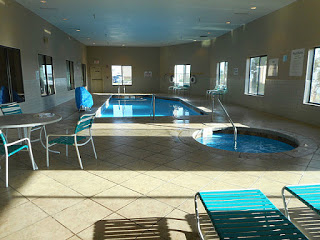 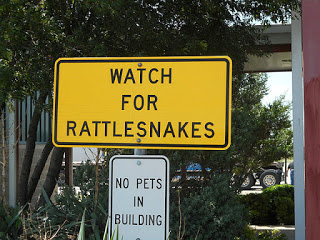 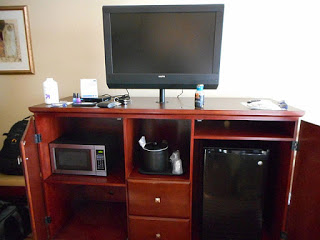 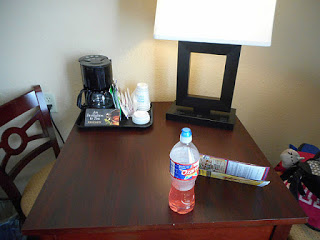 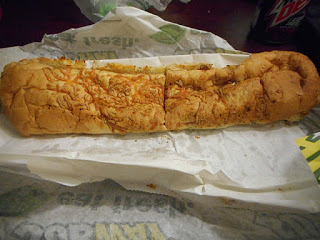 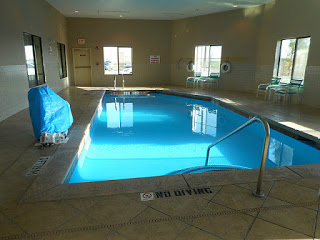 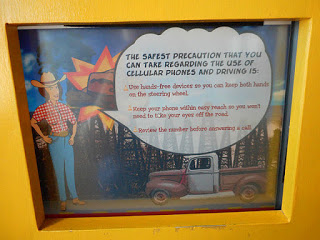 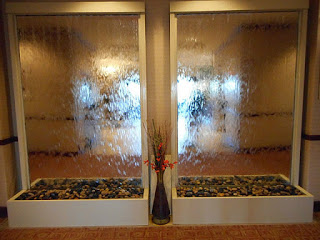 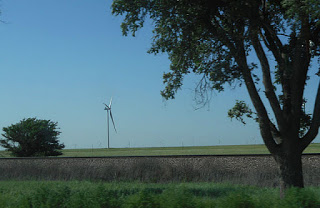