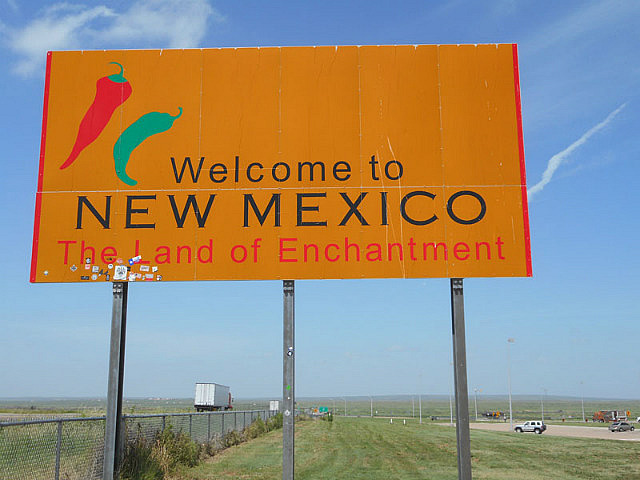 Tuesday, June 23, 2015
So we woke up, and went to the breakfast at the holiday inn. The cheese omelets were overcooked and not edible, but there was sausage patties, bagels, cinnamon buns, oatmeal, yogurt, and muffins, so there was still a lot to choose from. The coffee was really good and I was happy to see creamer options that weren’t just limited to hazelnut, which I can’t drink because of a deathly nut allergy.We rested for a little while afterwards, Justin cleared his 3ds’ street plaza, and I read more of The Book Thief, , which I find I’m really starting to enjoy. Then we repacked all of our stuff, grabbed a luggage trolley and it was off to destination number two.

The drive to New Mexico wasn’t as long as the drive on the first day, which was really nice. I also got excited when we passed the state line from TX to NM, and I got to set foot in a state I never thought I would ever set foot in. We stopped at  a nice travel plaza, where they gave us a guidebook about NM, and I also found the 2015 KOA catalog, for free, which will be very helpful when we plan our lodging in the more northern areas on our route, when it isn’t 103 degrees, and it’s more fun to camp. 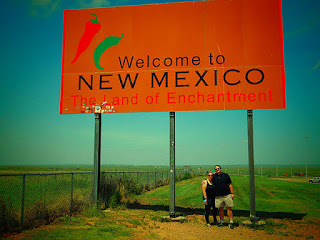 The on road scenery was much different than the scenery in TX. In TX there was a lot of flat farmland, grassy knolls, and cows. In NM, it starts to get more hilly and rocky. Justin said the scenery reminded him a lot of Molgure in the World of Warcraft, which is apparently where cow people live. 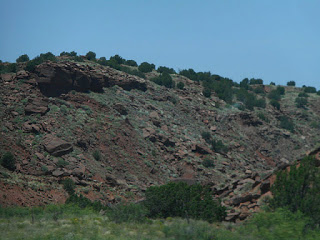 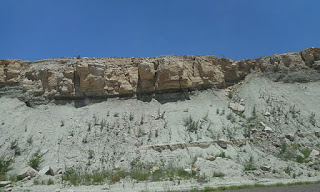 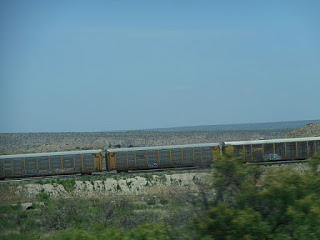 On the road, we saw a parade of fancy cars with decals all over them, I wonder if they’re going to a car show, or doing some sort of car tour or something, there were a lot of them.NM really likes to advertise it’s rest stops. For one rest stop, we saw 24 different signs in a row for it, and another had just as much if not more signs for its exit.

There are also lots of bugs in NM. I’ve seen like ten different types of ants, several different species of beetles, and humongous bees.

As we started to get closer to Albuquerque, the land of Breaking Bad and meth labs, it began to get much more mountainous. It’s pretty cool seeing how the landscape changes as we get further and further from Houston.

It’s also much cooler here. I mean it was 103 degrees, but there was no humidity like there is in Houston, which made the hotness much more tolerable, though I think we’re both going to die when we get to Vegas and it’s like 115 degrees in a dry heat.

The drive today was only about 4.5 hours. We kept on passing routes for Historic Route 66, but are on too much of a time crunch to check it out, but I hope we have a chance because it would be awesome to see all the abandoned ghost towns and such. There was a Rent sing-a-long, okay a solo Rent sing-a-long since Justin didn’t sing with me, at all. Some Progressive rock like Kamelot, Savatage, TSO, and Queensryche. We had just started listening to Les Miserables, when we got to the hotel.

Check in was easy. I’ve been using the app Hotel Tonight to find all of our lodgings, on the fly,for the trip. It’s super easy to use and has saved us a lot of money. For example, we paid ninety dollars [not including tax and stuff] to book our room tonight, where the room we have on the regular site is 128.99 before taxes and such. It also prepays our room for us, so it’s much less of a hassle when we arrive at the destination. It also gives you several choices for a city, and shows you pictures of the property, lists what they like about it, and has reviews. The girls working the front desk were also very nice and helpful.

After settling, we decided to go see a movie because I really really wanted to see Inside Out. We found a theater that was ten minutes from the hotel. It was huge and it served Starbucks frappachinos, which were waaaayyyy cheaper than even a diet soda.  The movie was really good. It was nice to see Disney tackle a somewhat mature topic. There were also a lot of jokes for adults. Even Justin really enjoyed it and I think he’s secretly glad that there’s a movie that doesn’t have a song I can torture him with like Let It Go from Frozen. 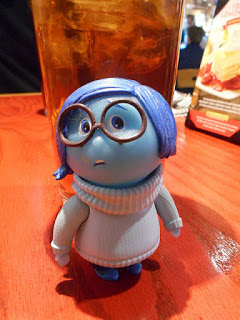 Then we went to Red Robin for dinner, where I had a huge chicken tender salad, which I finished entirely. I guess I was hungry. Aside from breakfast and some handfuls of Peanut Butter Monster trail mix [which re-hardened rather nicely after a night in a freezer], I didn’t eat very much today. Justin had some burger with a fried egg and sweet potato fries. 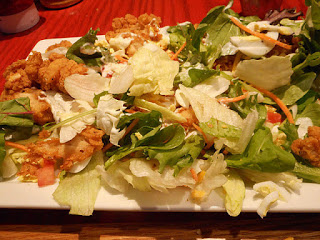 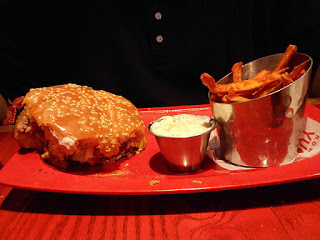 We came back to the hotel after dinner, and then went down to the pool. We soaked in the hot tub for about thirty minutes, and I even swam in the regular pool, even though it felt like a sheet of ice after soaking in that hot tub, though once I got in, it really wasn’t too bad. However, due to my clumsiness, when I was reentering the hot tub, I forgot there was a second step and tripped and twisted my knee funny, it still aches, but I can walk and stuff, so it’s totally not the end of the world, it’s just typical me, the klutz.

Now, it’s down time. I’ll probably read some more, be pissed I finished all the books on my kindle and be “forced” to buy new ones, and then it’s early to bed tonight.

Tomorrow we hit TWO of our national parks [which means I can break out the fancy schmancy DSLR camera] if all goes as planned: Petrified Forest, and our final destination, The Grand Canyon. 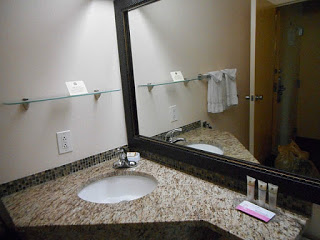 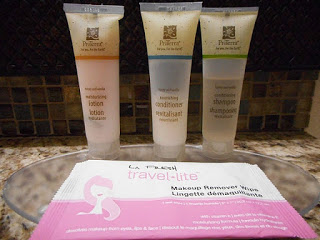 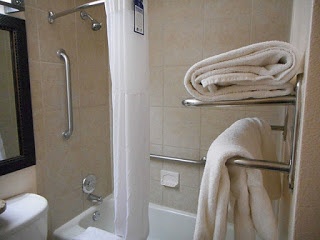 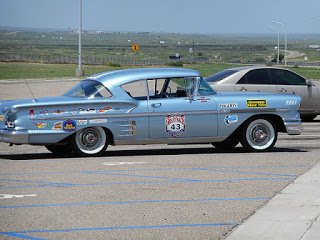 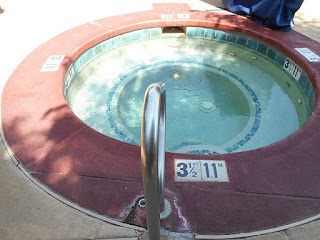 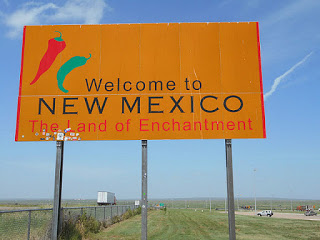 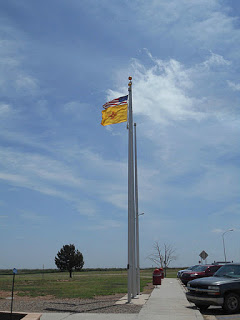 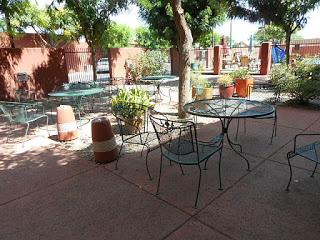 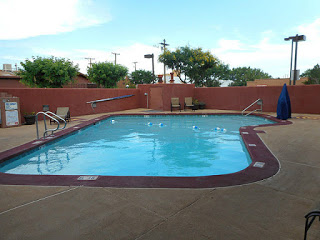 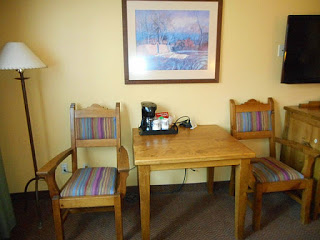 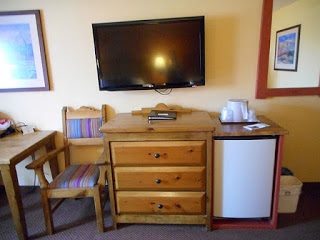 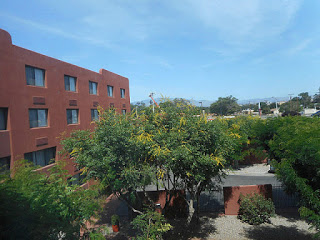 1 thought on “The State of Enchantment”