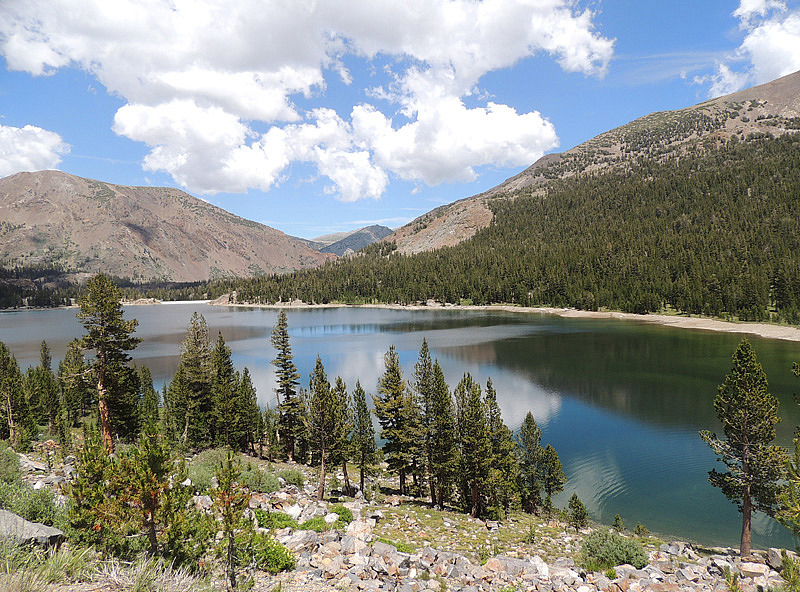 Yosemite National Park was amazing. Words cannot describe it, and my pictures do not do the park justice. 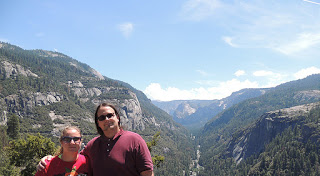 So keep that in mind while you’re reading this.

The first night we arrived at Yosemite, at Housekeeping Camp, as soon as we unpacked our car, we made ramen noodles with our Bunsen burner like stove, which I think made Justin’s entire trip.

Housekeeping camp is awesome, it’s sort of like camping, but not really, but sort of. Our tent was in a great area, it was right on the main room, and the bathroom was directly behind us, which made me very happy since I was having nightmares of getting lost in the campground and getting chased by bears.

It’s not a fancy place, no WiFi, no cell-service, no cable TV, no anything, but that’s what made it super great. There is electricity though, so I could charge my kindle, at least.

The beds aren’t the most comfortable, in the world, but they’re far more comfortable then sleeping, on the ground, in a tent, which we’ll get to experience in Oregon. The nights get cool, so make sure to bring warmer clothes to sleep in, since there is no heat. 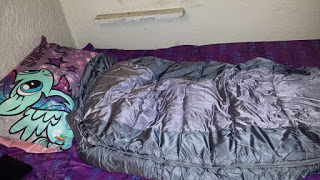 Oh and watch out for bears, even though we didn’t see any, except for the one that Justin hallucinated after getting deet poisoning. But you still have to make sure that everything with a scent including deodorant, shampoo, suntan lotion, etc, as well as any food and drink, even if you have a Yeti, which is certified to be bear-resistant, it still needs to go into a bear locker, which are complicated things with chains and carabiners.

We didn’t stay up very late that night, since we wanted to actually see Yosemite, and not sleep. Justin made the mistake of spraying deet all over his skin to protect himself from bugs, and spent the night hallucinating bears, and spent the morning throwing up and sweating.

The next morning, we woke up, Logan was at Yosemite too, hanging with some of his friends,and he stopped by, and hung out with us for a little while with one of his friends before they decided to do the Vernal Falls and Nevada Falls hike. Justin made freeze-dried breakfast scramble for breakfast and it was amazing.

Then we hopped on the shuttle and took it to the Visitor’s Center, where we boarded a different shuttle that took us to El Capitan, which is a huge granite monolith and ascends to about 3000 feet from base to summit. When we passed it, the driver told us that there were actually people climbing up it. It’s supposedly one of the most challenging climbs for serious rock climbers… I just stuck to taking pictures of it. 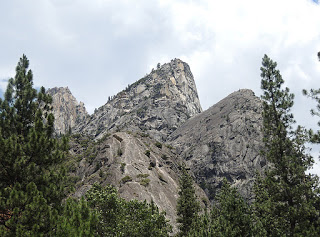 After El Capitan, we took the shuttle to Bridalveil Falls. It was a short hike to the actual falls. The falls were sad. Due to the California drought, a lot of the water falls just aren’t what they’re supposed to be anymore. The falls are the most active in spring. They just seemed like a tiny trickle of water, when we saw them. They were still beautiful, but not as beautiful as what they could be.

We climbed some rocks at the foot of the falls, hoping to get a better view of the falls, but as soon as we started climbing, it started raining, and those rocks were slippery enough even when they were dry, so we scrambled to get off before it got extremely dangerous. I slipped and cut my hand, and scraped my knee, but it was nothing that seemed unusual to a klutz like me. We hiked back to the shuttle pick up and waited about thirty minutes in the pouring rain without any coverage because there is none, and got extremely soaked. The rain sort of felt good though and it reminded me of Justin and my’s first date at the zoo, where it started pouring and we got soaked. 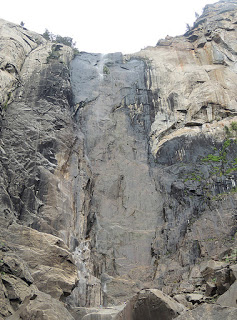 We finally caught a shuttle,and went back to the Visitor’s Center, where we bought postcards, stickers for our passports, stamped our passports, and I bought a baseball camp.  We gave so many postcards that we haven’t mailed yet because we’re sooooo busy.

The rain dried up by then, so we caught another shuttle to Yosemite Falls, it was another fairly easy hike to the lower falls.

Yosemite Falls drops a total of 2,445 feet from upper falls to bottom falls. The falls are one of the top twenty highest falls in the world. We only got to see the bottom. The falls were beautiful. The falls were running pretty steadily, not as full as they are in spring, but there was still a good amount of water, even though the water didn’t quite reach the rocks, which made that stream bed sort of dry, and people were climbing all over it.

There are also lovely signs about people cutting their summer vacation short because they were climbing the falls and showed x-rays of a cracked skull, a broken knee, a broken leg, and a broken arm… Not that people listened to it, mind you. 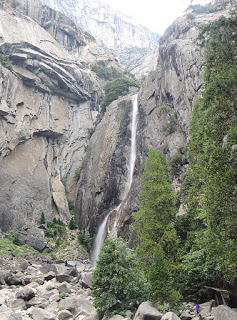 As we were hiking we heard very loud thunder, still Justin decided to attempt to climb the falls, I decided I wasn’t going to do it because I saw cumulonimbus clouds and knew a storm was coming, not that Justin listened. Surely enough, after about five minutes after Justin had left to go climbing, a storm raged on, crazy lightning, dark clouds, rain that felt like sharp ice daggers, and loud thunder, and he had to scurry back. The rain wasn’t going to stop and there was no place to hide from it from where we were, so we said whatever, hiked back in the rain, and caught a shuttle bus back to housekeeping camp.

It was raining and I thought it was the perfect time to take a shower. Not so much. I waited like thirty minutes on a line for a shower that was covered in hair and who knows what else. On the plus side, the water was really hot and felt great. The girls’ showers themselves were just nasty. Justin said the guys’ showers were much cleaner.

Went back to camp, and we had dinner. Hot chocolate and freeze-dried chicken and rice. WE were making smores over the burner, when Logan showed up. He chilled with us for a bit while he was doing some laundry at Housekeeping camp, and we talked, and compared tales of the day before he had to go back.

The storm eventually cleared up and sky was clear and the amount of stars and constellations that you can see from Housekeeping camp is amazing.

We stayed up till about midnight. I read my kindle. Justin played his game-boy. Then we went to bed. There were seriously loud rainstorms and thunderstorms during the night that kept on waking us up, but it was still pretty awesome.

We woke up early the next morning, made more freeze-dried breakfast scramble, packed our car, said goodbye to our little cabin and it was off we went.

We took a scenic trail back and rode down Tioga Pass alongside Tenaya Canyon, which may have been the scariest thing we’ve ever driven down and that includes the Great Smokey Mountains in a storm. The Mountains that are a part of the Canyon are huge gray granite things. Tioga Pass is about 9000 feet or so. There are no guard rails and if your car slipped, you’d be dead… Luckily Justin drove. I will say this though, the Sierra Nevada Mountains are beautiful, and there was even remnants of snow on some of them… In July… We also saw Cascade Falls, which were also beautiful.

We also drove by Tuolumne River, which was filled with cute little waterfalls and rapids, though we had to hike a bit to find it.

We eventually arrived at Tenaya Lake, which was a beautiful late, made by glacial action, which reminded me of a smaller version of Crater Lake, and the waters were just as blue. 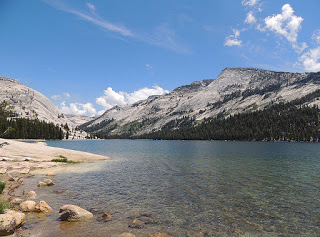 Then it was off to Reno, Nevada. 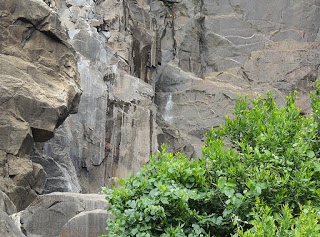 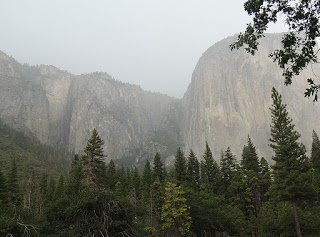 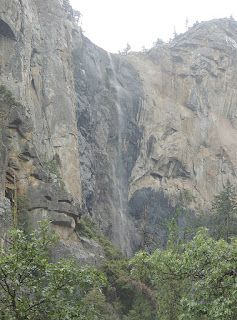 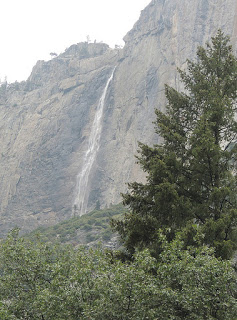 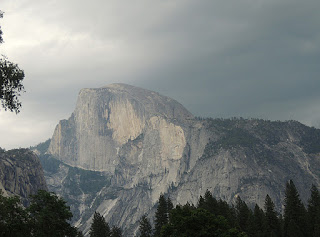 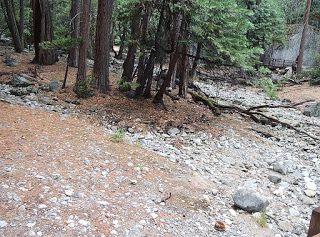 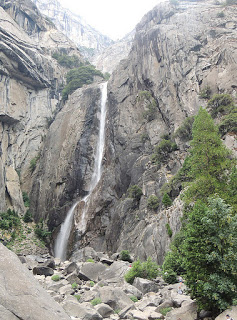 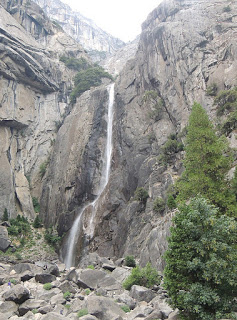 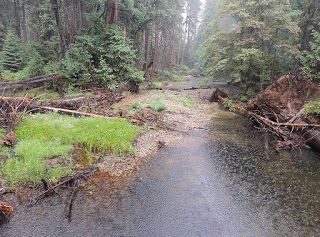 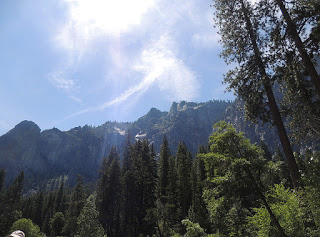 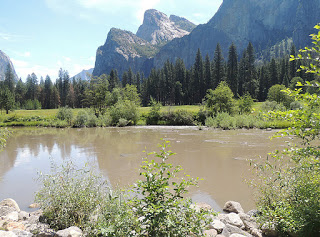 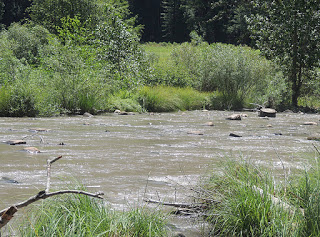 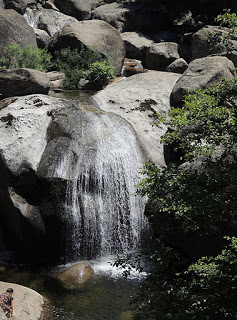 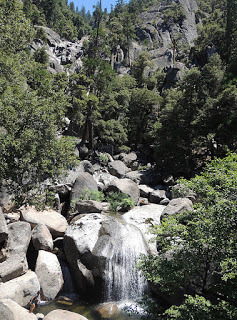 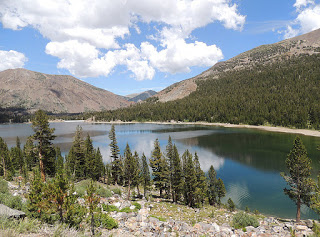 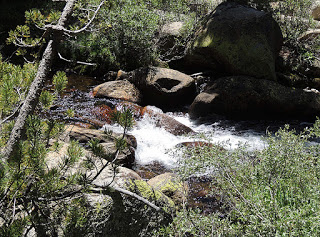 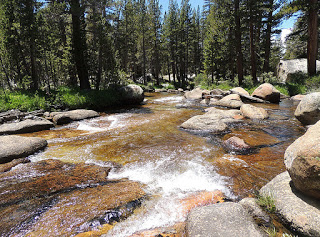 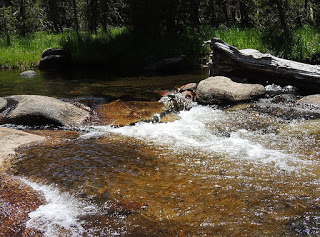 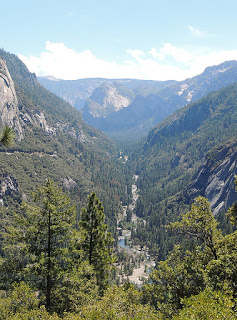 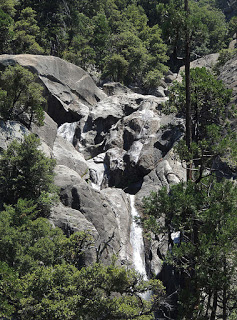 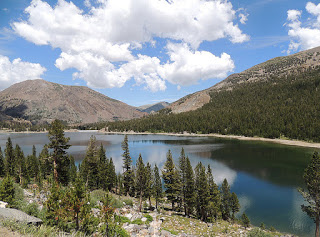 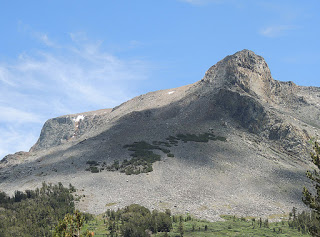