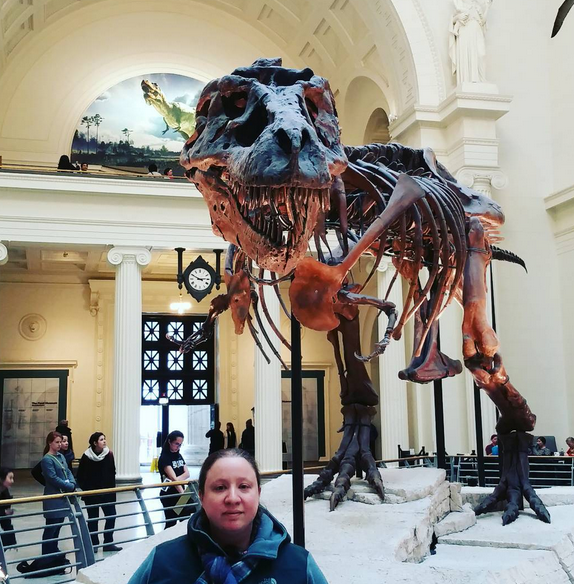 Justin and I survived #Stella. We were pretty lucky. We were away from the east coast. We did get snow, but it wasn’t awful. The roads were pretty clear, and the snow was no more than a few inches. Justin said driving in snow was fine. We managed to cross through four states today. We started in Ohio, drove to Indiana, took a 30 minute detour in Michigan, so we could cross Michigan off our state list [and I bought a really cute Pokemon at the cleanest Walmart I think I’ve ever been to in Sturgis, MI, Justin bought Cheez-Its and Monster], then wound up in Chicago, Illinois by the end of the day. 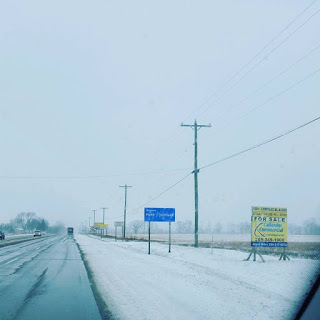 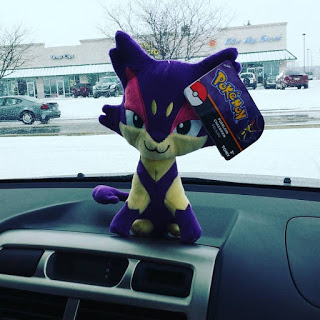 We started our morning by trying out the Tim Horton’s that was next to our hotel. I mean, we REALLY don’t have Tim Horton’s in Texas and I wasn’t going to Canada any time soon, so why the hell not? I had a sort of frapachino like drink with oreos, which wasn’t bad. I think I prefer frapachinos, but that’s because I’m a basic white girl, complete with the North Face Fleece and the Uggs. We also had Timbits, which are sort of like munchkins. Basically Tim Horton’s is what would happen if Dunkin Donuts and Starbucks had a baby. 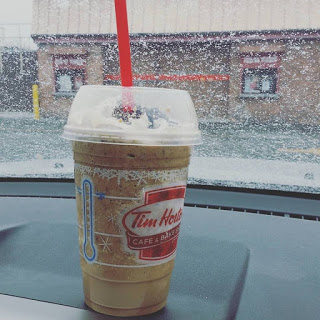 The snow wasn’t awful. It snowed, yes, but we never had snow at a level, where there was absolutely no visibility. At the worst, visibility wasn’t much different than a foggy morning on my commute to work. The snow alternated between being a flurry, and being heavier, but it was never blinding, there were no white-outs or anything like that. We saw tons of plows and salt trucks on the interstates, so the roads were well-treated, and constantly treated, so the roads weren’t very slippery or icy. Justin said it was a lot easier than driving through a bad Houston downpour, however, he isn’t going to run away and move to the Midwest either, he doesn’t love the snow or cold like I do. 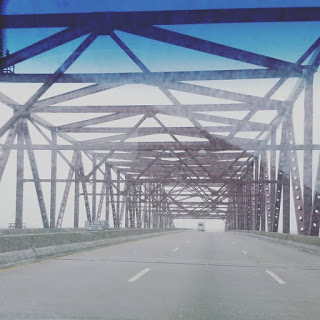 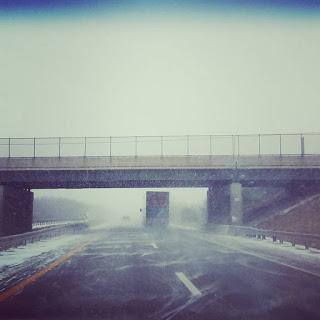 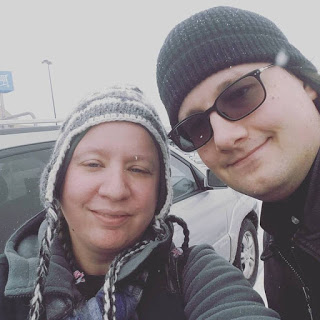 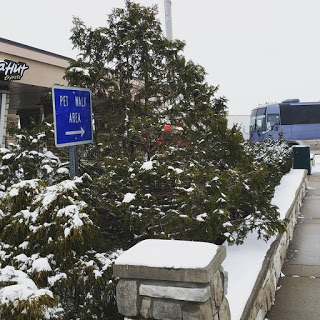 The highlight of the day was getting into Chicago of course [and yes I bought a Chicago Starbucks mug]. I’m OBSESSED with the Dresden Files. I’ve read the books, a million times, and I’m currently listening to the audio-books during my 45 minute plus commute to school [thanks Houston traffic]…and ever since I read Dead Beat, I needed to selfie with Sue. 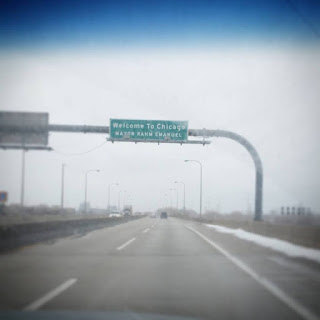 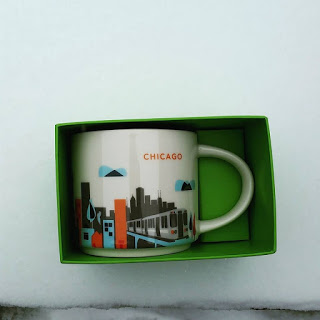 Who is Sue, you ask? Well any good scifi nerd could tell you that Sue is a Tyrannosaurus-Rex skeleton, the largest, best-preserved, and most complete Tyrannosaurus-Rex skeleton ever found. She measures 40.5 feet long from snout to tail and is 13 feet tall at the hip… But she is also the skeleton/fossil/dead thing that Harry Dresden brought to life using Butter’s as his drummer, to help fight the necromancers during the 7th book of The Dresden Files, Dead Beat. She lives at the Chicago Field Museum, which is also where Cassius almost killed Dresden, and left his death curse, which was “Die Alone,” before Mouse rescued him [and if you haven’t read the books, READ THEM].

The best part was that as we walked into the Chicago Field Museum, something happened to the credit card machines [maybe it’s because I’m secretly a wizard, and technology messes up around me like Harry Dresden], so they let us in free!! It was our lucky day!!! See, Sue and my selfie was meant to be!

Aside from seeing Sue, which might be one of the highlights of my life up to this point [it’s like having one of your nerdy dreams come true], we also perused the exhibits of the African Animals, Birds, and gemstones. There were some really cool exhibits there, and we wished we could’ve had more time there, but we also wanted to get out of there before Chicago Rush Hour traffic started. So we ended our day at the gift shop, I got Sue memorabilia [what a surprise, I’m sure], and Justin got some shot glasses.

We walked past Shedd Aquarium, which is also an important part of the Dresden Universe, it’s where the denarians kidnapped the archive to try to get her to join The Order of the Blackened Denarians, who are some of the best bad guys in the series. We didn’t get to explore the aquarium [though I did take a picture of the outside] because we didn’t have a lot of time, but that entire area is filled with awesome museums, and when it’s warmer, we’d love to come back and explore more of  Chicago. 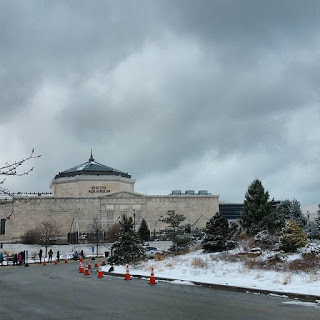 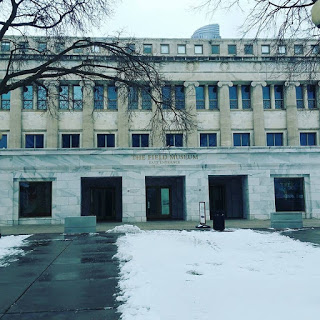 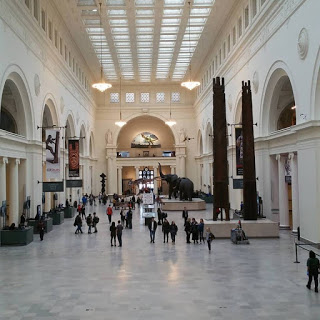 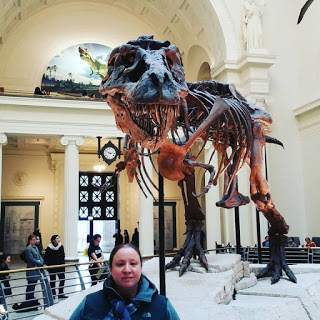 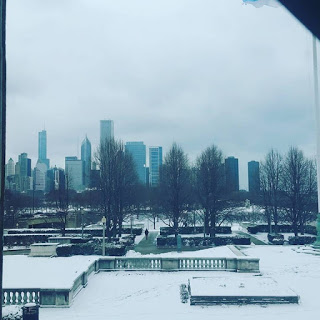 I also saw Lake Michigan, which may be the ONLY great lake, but hey, at least I can saw I saw it, I wish we had time to explore the coast more [and maybe see if the water beatle was parked at the pier….], but we’ll just have the come back again. 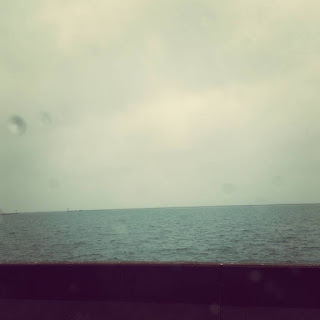 After my nerdgasms at the Field Museum and Shedd Aquarium, we went for deep dish Chicago pizza at a place that Justin discovered on the internet. It was called Lou Malnalti’s. I had a personal-sized sausage pizza that I didn’t finish, Justin had some sort of special. Chicacgo Deep Dish Pizza is good. It’s not NYC pizza, but I liked it. It’s sort of like upside down pizza in a way, it has a crust that’s more like a cake, then the cheese,then tons and tons of tomato and tomato sauce. You definitely have to like tomato to appreciate Chicago Deep Dish Pizza,but it is good, it’s different than what I’m used to having been raised on the east coast, which is the land of NYC Style and very thin crust pizza,but I enjoyed it. They also had this amazing three-cheese bread that Justin and I split. 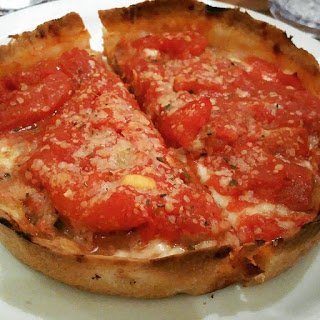 We’re staying at a hotel in Skokie, which is sort of near Northwestern University. It’s a nice hotel. Unfortunately they don’t have a hot tub, which would’ve felt really great in this 29 degree weather, they just have a pool, and while it’s heated, it’s not hot enough to actually be relaxing, so we’re just chilling. No worries though, tomorrow we’re off to Wisconsin Dells to Kalahari Indoor Water Park, and there will be PLENTY of hot tubs there, including one that’s part indoors and part outdoors, and my inner polar bear, wants to try the outdoor one in Wisconsin’s freezing cold weather.

That was Day Two. TOMORROW IS OUR TWO YEAR ANNIVERSARY [and yes we’re spending it at a waterpark!]

Thanks for tagging along on our adventures 😉