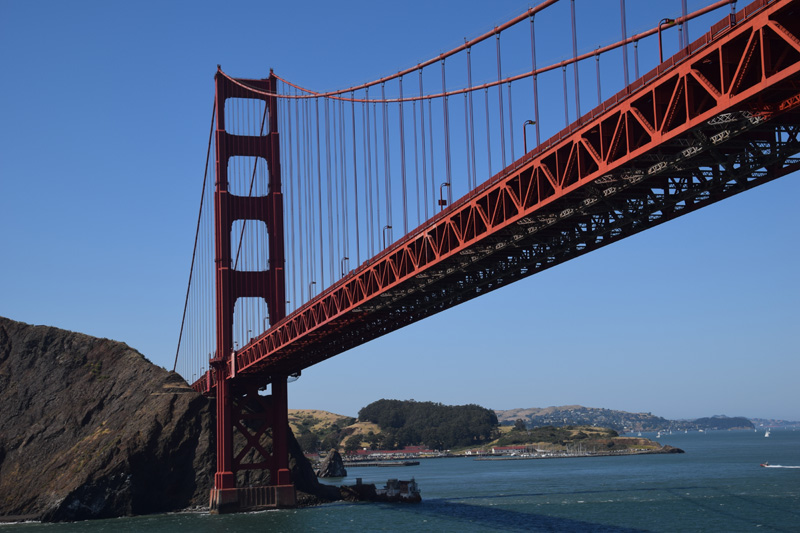 [first of all, I’m sorry for the format of ALL the cruise entries, I have no idea what they formatted the way they did, and I can’t really fix it]
May 28th, 2017 San Francisco, California
Today is day one of our Alaskan cruise. The cruise is a 10 day round-trip cruise from San Francisco, California to
Alaska. Ports will include Juneau, Skagway, Ketchikan, cruising through Tracey
Arm Fjord, and Victoria, Canada.
Justin and I got to California yesterday. I didn’t blog because there wasn’t much to talk about and I had
woken up at 4 am to catch our flight, so I was exhausted. I mean, really, there
isn’t much to say about the trip to California. We caught a quick flight from
Houston to Dallas, our first flight involved us sitting on the tarmac for 30
minutes because the runway was too crowded, our second flight was 50 minutes
late, but that didn’t really affect us since our connection was way after our
original flight. I played a lot of Fire Emblem Shadows of Valencia and watched
Sing on the second flight, which was a cute movie, I was sort of sad we landed
before I finished it. The American plane was really nice. The seats seemed
bigger than other seats and they had free games, movies, and music for the
duration of the flight.
San Francisco is really hilly. Like really hilly. I bet Californians stay super skinny from walking up those hills
every single day. I can’t even imagine trying to drive up those hills. I feel
like I would get to a stop sign or a red light, and the car would just roll
downhill if I was driving. My dad and I walked to an ATM down one of the
streets, and we had to walk four blocks up to get back to the hotel and my
Garmin Vivoactive counted those four blocks as 20 flights of stairs and my
calves were aching for almost two days from that one walk.  Of course that could also be because I walked
them in flip flops.
We stayed at a hotel called the Mark Hopkins International on California Street. I mean, it was a nice hotel, I
suppose, albeit a bit too fancy for my tastes. We watched a lot of Food Network
in our hotel room. I really liked the lemon-scented shampoo, body wash, and
conditioner that they had. We ate dinner in the hotel restaurant, it was good.
I had macaroni and cheese, mashed potatoes, and creamed spinach for my meal,
while everyone else ate steak. When dinner was over, Justin and I went back to
our room, and I passed out in seconds because I was so exhausted from waking up
at 4 am.
This morning we ate a fancy breakfast in my parent’s room. My fruit tray had watermelon, cantaloupe,
pineapple, and papaya.  I learned that I
don’t like papaya. We got to the pier around eleven thirty and were basically
let on the ship right away. Justin and I are on the 12th deck aka
the Aloha Deck, and my parents have a mini-suite on the 9th deck or
the Dolphin deck. We went to the ship’s pizzeria for lunch, I had a thin crust
cheese pizza, which was good, but I find myself missing the deep dish pizza of
Chicago.
After lunch, we did a brief tour of the ship. The Grand Princess is much bigger than The Pacific Princess, which is
the ship mom and I went to Iceland on, last summer. It has two pools, an indoor
pool with a retractable roof and an outdoor pool. The pools go up to 7 feet
deep, which is nifty because it’s rare to find a pool that is deep nowadays,
due to safety hazards, I’m sure. There are a lot of hot tubs. I’m not even
going to lie, awesome pools are seriously my number one concern on any trip,
and the Grand Princess, so far, has the best pools out of the limited amount of
cruises that I’ve been on.
After the Muster Drill, Justin and I wandered to the pool deck to watch the sail away. We passed Alcatraz, which is
on my list of things I want to see in my life, and we sailed under the Golden
Gate Bridge, which was really cool. I’m also pretty sure I saw a dolphin in the
ocean as we were sailing away, it was either that or a big fish, but it went
deep under the water before I got to have another look at it. 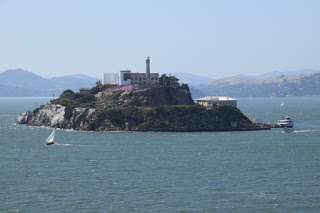 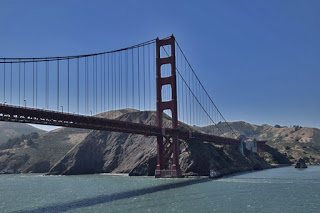 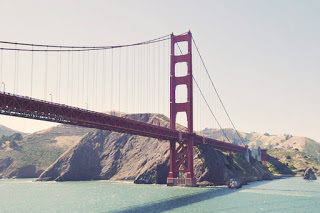 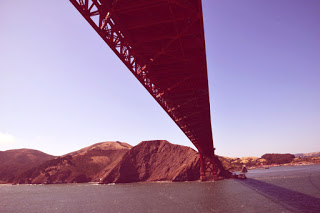 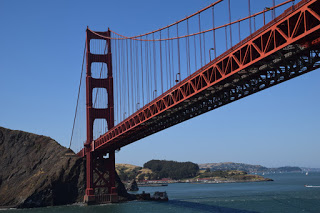 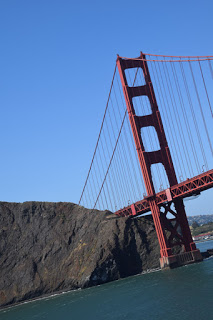 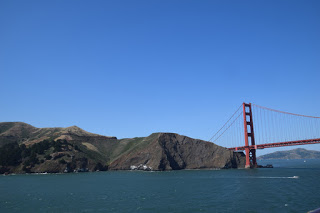 After we sailed past all the interesting places, Justin and I went swimming. We stayed in the hot tub for
awhile, but we couldn’t figure out how to turn the jets on, but nevertheless
the hot tub felt really nice. We also swam in the pool, the water seemed really
warm, it probably wasn’t really warm, but since it was cold outside… like in
the 50s, I’m sure the water seemed warm because it was so much warmer than the
outside air, but we swam in the inside pool, it was too windy to swim in the
outdoor pool, and Justin and I were the oldest people in the pool. I feel like
an Alaska cruise isn’t a cruise that people go on to swim and sunbathe, so
hopefully we’ll get to swim more throughout the trip. Then we went back to our
cabin and showered. I should also mention that Justin packed his switch, and
we’ve also been playing Mario Kart on the cabin TV, we’re nerds like that. 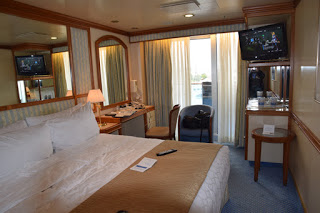 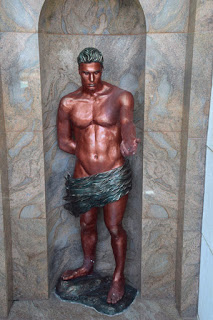 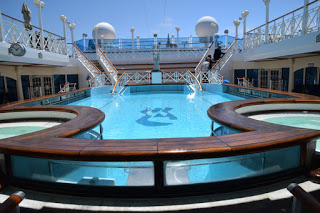 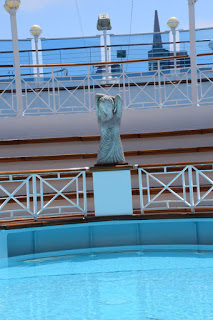 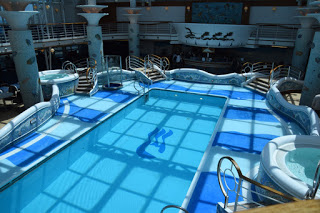 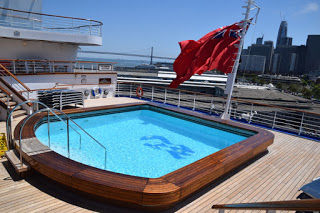 We met my parents for dinner around 7:45. We have a really nice table in the corner of the dining room by the
window. I had some melon salad as an appetizer, it was honeydew, watermelon,
and cantaloupe, which are my three most favorite fruits, in some sort of wine
sauce, it was delicious.  For dinner I
had this sort of leek and feta cheese quiche like thing? It was really good.
Everyone else had prime rib. I’m weird. I don’t like steak when it’s cooked in
restaurants. I mean I like it when Justin makes steak, and when my mom made
steak, but I don’t like professional steak I guess? For dessert I had some
flourless chocolate cake and I got a scoop of vanilla ice cream to put on top
of it, so it was sort of be ala mode, and that was a good call, it was
delicious. I also drank decaf tea. Dad had vanilla ice cream, which I guess is
his thing? Justin has chocolate chip ice cream with chocolate syrup. Then we went
our separate ways.
Tomorrow is an at sea day. It’s also my dad’s birthday. I gave my dad his birthday gift yesterday when I saw him. I
got Jim Butcher, author of The Dresden Files, to write “Happy Birthday Chuck”
and autograph it when I went to Comicpalooza in Houston about two weeks
ago.  [And if you’re wondering, Jim
Butcher is fucking awesome, in person, super nice and awesome]. For my dad’s
birthday, we’re going to the Italian Specialty Restaurant to celebrate.
As we’re sailing north, we also plan to sit on our balcony and maybe see some humpback
whales and Dell’s porpoises or something. Really, the point of this trip is to
relax since both Justin and I have just finished our school year and teaching
is stressful, so relaxation is welcome.
And that’s it for Day One.