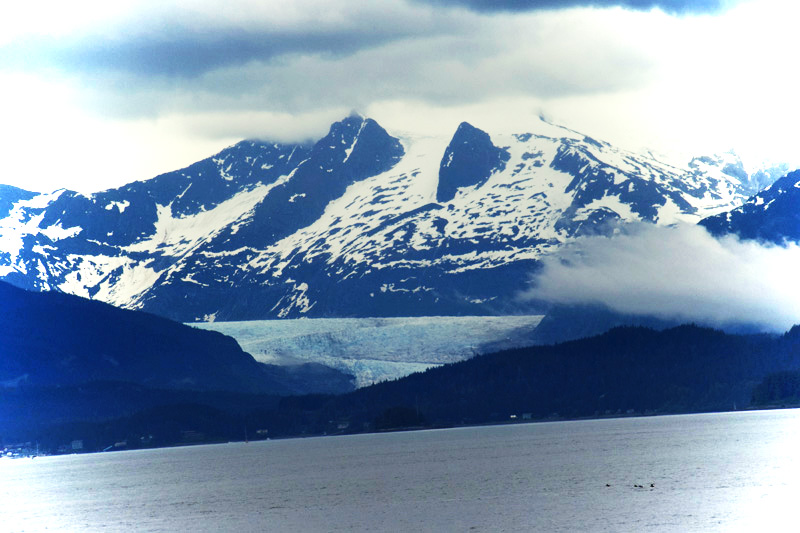 June 1st, 2017 Juneau, Alaska
Juneau,Alaska was founded as a gold-mining camp in 1880. It became the Alaska
territorial capital in 1900, home of the Legislature in 1912, and the Alaska
state capital in 1959 upon statehood. It is the only US capital that you can
get to via ONLY air and sea.
Juneau is located in the panhandle of southeast Alaska, 900 air miles north of Seattle
and 600 air miles north of Anchorage. It is approximately 3018 square miles and
as aforementioned, the only state capital in the US with no road access. Juneau
has a population of 32660 people. The weather in Juneau averages in the 60s
during the summer, with many days reaching into the high 70s and low 80s. The
average annual precipitation is 86.1 inches and it was raining as we docked in
it today. 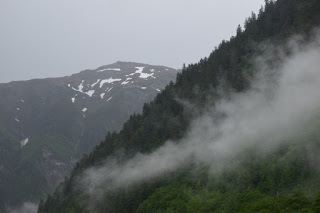 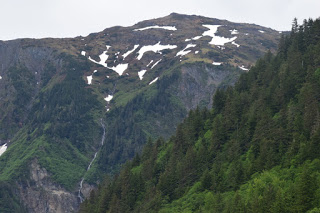 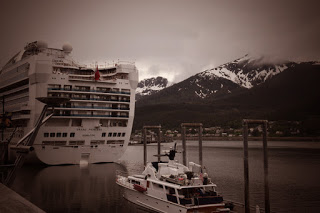 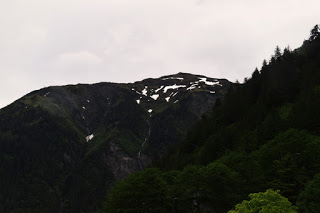 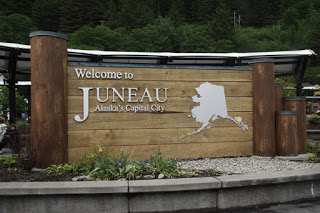 Justin and I woke up around 8 o’clock today and we had already pulled into Juneau.
From the port, Juneau was pretty, it’s surrounded by snow covered mountains and
there are lots of little waterfalls that trickle down the mountains as a result
of the melting snow from winter. We had breakfast in our room. We ordered our
usual hot chocolate and coffee from room service, as well as egg and cheese
sandwiches and cereal for me and toast for Justin.
Our excursion was at 9:05 am, we were going whale-watching. We drove about thirty
minutes through downtown Juneau to get to the port. Juneau is very much a
tourist trap. It has the same stores like Diamonds International and Del Sol
that you basically see on every single cruise and at every single port that you
would go to. I mean, I guess the population is probably right to make sales, if
you can afford a cruise, you can probably afford a tanzanite necklace from
Diamonds International, but at the same time, it seems sad that even a place
like Alaska has lost some of its authenticity in an attempt to make money.
It was very gray in Juneau. Alaska seems mostly to be misty and foggy. It is
beautiful, the snow-covered cliffs are absolutely beautiful, but the sun
doesn’t seem to come out very much. It did come out for select moments
throughout the day, but it never seems to stay out for long, so that colors the
surroundings to be very monochromatic. Justin and I stayed outside for most the
whale-watching tour. It was breezy and cool on the water, but it felt good,
especially since we hail from Houston, land of humidity.
The whaling company that took us out was great. We went out with a boat from the
Allen Marine Company, and the guides and naturalist were great. The boat also
had free tea, hot chocolate, coffee, and chocolate donut holes. The hot
chocolate was really good. There were also food you could buy, my dad tried a
reindeer dog and said it was pretty tasty. Justin had a pretzel with cheese,
which really isn’t anything unique, but was tasty, nonetheless.
We saw quite a few humpback whales! Humpback whales are baleen whales. They feed
by straining water through comb-like plates of baleen, which trap krill and
smaller fish. Their blow rises up to ten feet into the air and they blow 4-10
times at 20-3o second intervals, which makes their humped backs visible. When
they start a deep dive, you can see their tail flukes in the air, and their
dives can last anywhere from a few minutes to only thirty minutes. The average
female humpback whale is 49 feet long and weighs 35 tons. The average male
humpback whale is about 46feet long and weighs 25 tons.
We even saw a little baby humpback whale, which our boat named Ed, which I suppose
can stand for either Edwin or Edwina. It was about four months old and even
though it looked tiny, it was probably still huge. Baby whales mainly feed from
their mommy whale’s milk and supposedly their milk tastes like fishy and salty
yogurt, though I’m not quite sure why or how our guide knew that. 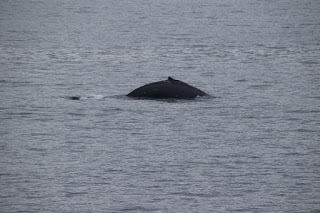 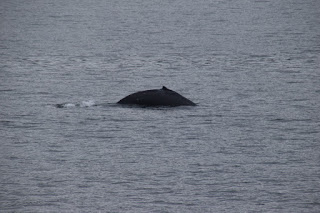 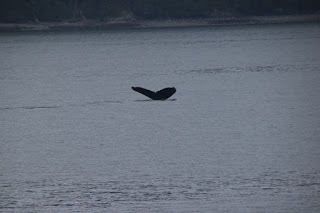 We also saw a lot of Bald Eagles. Bald eagles are the most common bird of prey in
Southeast Alaska. Only the adult bald eagles have white heads and tails. Until
eagles are four to five years old, they are solid brown or mottled brown and
white and are easily mistaken for golden eagles. Eagles lay one to three eggs
per year. Hatchlings grow rapidly and the young eaglets leave their nests just
in time to feed on the abundant salmon during the late summer runs. The average
wingspan of an eagle is 7 feet, and female eagles weigh 10-14 lbs while male
eagles weigh 8-10 lbs. 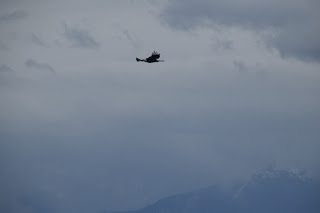 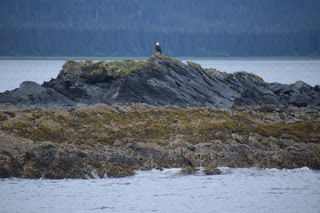 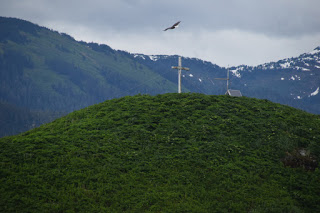 We also got a decent view of the Medenhall Glacier. Since it was sort of gray out,
the glacier sort of just looked snowy, gray, and white, instead of the blue
that glaciers usually look. I wish the sun had been out, so we could’ve seen
the blue, but oh well. The Mendenhall Glacier was formed about 3,000 years ago
during the “Little Ice Age.” It feeds from an ice field that is high above
Juneau. Thanks to the uniqueness of Alaska’s climate, it’s been able to survive
better than most other glaciers. 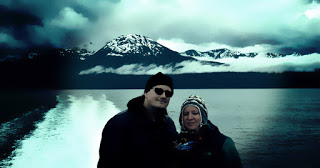 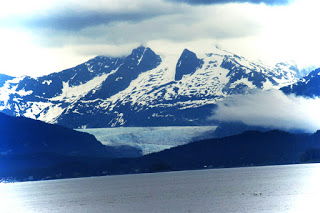 When we got back from our whale watching cruise, Justin and I explored downtown
Juneau. We got some really good coffee from Heritage Coffee, which is
apparently an award-winning roaster. It was really good and it had a good
taste. I had a peppermint mocha with four shots of espresso and Justin had a
peppermint latte. We did a little souvenir shopping, I bought some earrings,
magnets, and postcards, and Justin bought a Christmas ornament and shot glass.
We stopped by a store to get jelly belly jelly beans because they bragged about
having a huge selection of flavors and we were curious… It did indeed have an
amazing selection of flavors, so we both got bags of jelly beans. As we were
paying, I heard the clerk say “y’all have a good day now” to a couple and I
said he must be from Texas, and indeed he was. In Fact, his daughter had just
graduated from University of Houston, and he had just moved to Alaska about six
weeks ago. Small world.
Justin and I went back on the ship and got some pizza. Then we went down to our cabin,
and Justin relaxed and took a nap, and I went to the gym and ran intervals for
thirty minutes. The ship was basically deserted since we were staying at Juneau
until eight thirty pm, so after I finished running in the empty gym, Justin and
I took advantage of the emptiness and went swimming and hot tubbing in the
pool, and we basically had the entire indoor pool area to ourselves.
We went back to our room around six thirty and showered and got ready for dinner.
For dinner tonight, I had a goat cheese soufflé, which was pretty good; I had
never had goat cheese before. There was a lavender infused strawberry sorbet to
“cleanse your palette” afterwards, and then I had gnocchi in vodka sauce.
Justin had fettuccine Alfredo, and then he had some sort of veal and lamb
combo for dinner. He decided he liked steak better than either of those. For
dessert, I had vanilla ice cream and I asked for some chocolate chip cookies
and made chipwiches out of those ingredients and it was really good. We were in
the dining room when the ship left Juneau and it was nice to pass by the
mountains and the waterfalls as we ate.
Tomorrow we go to Skagway, and then we sail through Tracey Arm Fjord early in the
morning on Saturday. After that is a day at sea, then Victoria, Canada, and
then another day at sea, and we arrive back to San Francisco, California… It’s
hard to believe that the cruise is already halfway over.