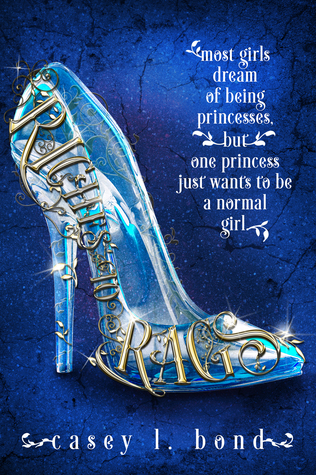 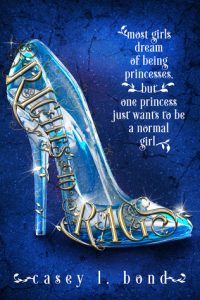 This is another book I borrowed from Kindle Unlimited. I think I initially got a sale offer from it on Bookbub but I went to check it out, it was an Unlimited title, and I’d rather pay nothing than spend money, so I used Unlimited to borrow it.

Riches to Rags is a reverse Cinderella story, as in the lead character Princess Ella Carina is the daughter of a brutal king, who basically keeps her and her sister Ivy locked up as prisoners in their castle. Ella’s only window into the outside world is a literal window she has in her bedroom, where she daydreams about the world outside the Castle and away from her father’s cruel and tyrannical rule. Her father rules her life with an iron fist, and arranges a marriage for Ella an alliance to a nearby nationa even though Ella is barely a teenager, and she has no say in the matter, as she must submit to her father. Her castle is attacked, and Ella is taken away from the life she had known, and sent to live within a peasant family to keep her identify a secret.

Ella thrives in the simpler life. She loves her work on the farm, she learns to love her adoptive family, with the exception of Millicent, her “stepsister”, and she even starts to fall in love with the son of the blacksmith, Asher.

But of course, no story ever has an instant happy ending. Ella’s betrothed, Trevor, the crown prince of Galder, who Ella was promised to, finds her. He tells her that she is in grave danger and must return to the castle she had come from and rule them as Queen. When he does find her, of course, he falls in love with her, and he vows to win her back.

Once of the nice things about this book is that there’s no annoying love triangle, at all. Ella knows who she wants [Asher] and is very clear that she wants to be with him and wants to stay in her simpler life instead of reentering the royal life that she came from.

Like I said this is sort of a reverse Cinderella story, which I thought was a unique twist. Our heroine wasn’t really mistreated by her adopted family, her “stepsister” Millicent wasn’t exactly as abusive or mean to Ella as similar characters are in similar stories. She was more immature and jealous. Her adopted family treated her like one of her own, and instead of falling in love with a royal, she falls in love with a peasant.

The final choice Ella had to make in this story was, does she reclaim her birthright as the Queen of Aelawyn, or is she able to continue living her life as a normal girl with the man that she loves?

I enjoyed this story. The author told the story well, and it had a unique twist that makes it stand out from other Cinderella stories. The characters are well-developed, and the world of the story seemed very realistic. For example, Asher was the son of a blacksmith, and he used his blacksmith skills to make swords, and little gifts for Ella during their courting. I also liked how Asher’s last name was Smith because it was an occupational surname, as those which were used in the Anglo-Saxon times, which is historically relevant as well as accurate. Ella’s adoptive family’s last name was Farmer, making her Ella Farmer, and the Farmers did work on a farm, and their farming played a role in the story. I also liked how well-developed all of the relationships between the characters were.

I do recommend this book. It was very well-written, and Ella was very much a relate-able character.

There is a trigger warning for this book- there is a suicide scene in the book, so if that’s something you might be triggered by, you may want to skip this book, but other than that, it was a very enjoyable book, a decently quick read,  well-written, and I’m looking forward to reading the next fairy tale re-telling from Casey L. Bond 😉