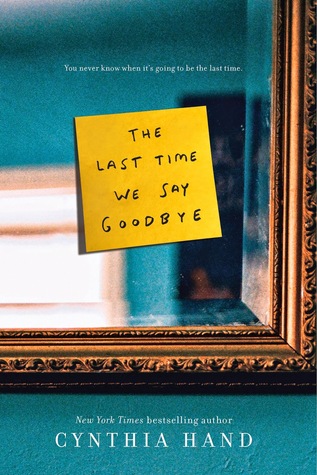 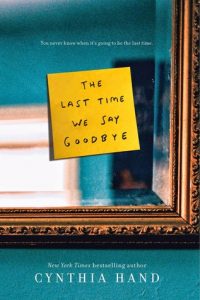 I got The Last Time We Said Goodbye via Bookbub, which is this amazing website that sends you book deals every day.  It’s completely free, you sign up with your email address, and enter book genres you’re interested in [mine happen to be fantasy/sci-fi, young adult, fiction, and chick lit] and every single day they’ll email you book deals that have books within those genres you selected that are either on sale from .99 to 2.99 or completely free, and you can buy them. I’ve gotten some really good books from it[and also some bad books, but well that’s life]

Anyhow, here’s a spoiler free summary of the book. Lex’s brother committed suicide, and this book is about her avoiding dealing with her grief over an unanswered text message from her brother, and trying to put her life back together. All of those facts are on the amazon.com summary of the book, so that’s as spoiler free as you’re going to get.

I really enjoyed this book. I’m fortunate enough that I’ve never had to deal with anyone committing suicide, but I have dealt with loss. I’ve also dealt with not saying goodbye. I was in Israel on birthright in 2010, and I was having the time of my life [maybe a bit too much fun], when I got off the plane at JFK airport, and saw my dad and brother waiting for me, I knew something was wrong. It was after one in the morning, and there had been no reason for my brother to join my dad at the airport. My grandfather had died while I was in Israel. He had been sick when I left, and I even called him once from a kibbutz and he was excited to hear from me. My grandfather had taken a turn for the worse when I was in Israel, and he had told my dad not to tell me because he had wanted nothing more than for me to go to Israel and he had been talking about it for months and was super excited when I got accepted into the Birthright trip. He wanted me to finish the trip. He didn’t want me to fly home from Israel, he didn’t even want me to know he was sick.

Words cannot describe the guilt I felt when I got off the plane and my dad told me that he had passed away and I had never gotten say goodbye to him. Even now, eight years later, I’m pissed about it. I try to reason with myself because papa wanted nothing more than for me to enjoy the Israel trip and it was his choice not to tell me he was dying, on the other hand, my dad should’ve just not listened to my papa and called me in Israel, I could’ve found a way to come home and I could’ve said goodbye. To this day, I am not over his death. I’ve learned to cope with it, but there are still little things that remind me of my grandpa, and bring on the waterworks. To this day, I’m pissed I never got to say goodbye.

I’m sure you’re asking why I rambled on about my life-story, when I’m trying to review a book.

Cynthia Hand captured Lex’s grief perfectly. She showed how Lex cut off all of her friends and the people who cared about her after her brother’s death. She showed how much it sucks to just hear people apologize to you over and over again, when words are meaningless. Lex’s reaction to her brother’s death was so poignant and so real, and I could relate to it, and that’s what made this a good book. This book shows what it’s like to be heartbroken, it shows how you should always show people you love and/or care about them because you never know what your last memory of them might be. This  book shows how hard it is to put your life back together after a tragedy.

The characters are also realistic, though Lex’s math brain hurt my lack of a math brain, but that didn’t take away from the story, and I did spend about fifteen or so minutes trying to figure out the Fibonacci number sequence after she referenced in the book, and could not for the life of me figure it out. The relationships described between Lex and her friends, as well as Lex and her family members and other characters in the story are completely believable. It’s nice to read a story about normal teenagers, who don’t have super powers, don’t sparkle in sunlight or turn into werewolves, aren’t rich, shallow, and spoiled [think Gossip Girl], who I can relate to.

This isn’t a happy story, there are some sad and heart-wrenching moments, but with a subject like a suicide, I don’t think you would expect a book that’s all glitter, sunshine, and rainbows either.

I gave this book four stars because it’s really good, and really well-written, but it’s not a book I’ll probably be thinking about for months to years to come, those are the types of books I save my five-star ratings for [think Unwind, I read that book in 2007, and I’m still thinking about that one scene, over ten years later, and getting the chills] but I enjoyed it.

I really enjoyed this story and highly recommend it. If you want a beautiful but tragic story, and don’t mind reading about deep topics like death or suicide or depression, you’ll like this book.