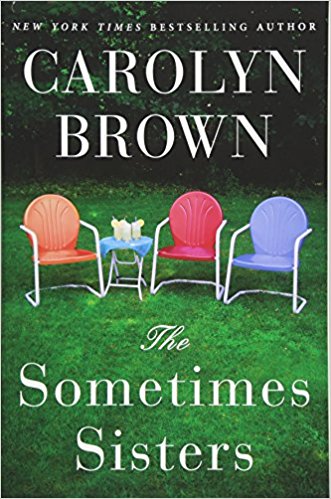 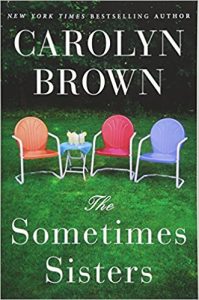 I gave this book three stars. That three stars isn’t a bad rating, this was a good book, I enjoyed this book. It wasn’t the best story I’ve read this year, but it was an enjoyable fiction book.

The Sometimes Sisters by Carolyn Brown is a story about family. It focuses on three sisters Dana, Harper, and Tawny, as well as Dana’s daughter Brooke. The “sometimes sisters” would connect during the summer month that they would spend at their grandmother’s rustic lakeside resort in North Texas.  But then shit happened, and the sister’s got torn apart, and their relationship become nonexistent. That broke their grandmother’s heart.

Then the grandmother, Annie, dies and she leaves her resort, “Annie’s Place” to her granddaughters hoping that the place that used to bring them together would help them heal their relationships with each other.

But this book is about family. I always have a soft spot for stories about families, especially stories about “sisters.” [Summer Sisters – you still break my heart, and it’s been more than 15 or something years since I read you for the first time]. Maybe it’s because I have an annoying brother and always wanted a sister? Just the relationships between sisters have always seemed like something magical that I lacked in my life.

The three sisters in the book all have issues. They all have that one big life-changing issue that molded them and their relationships with one another into what it is at the beginning of the story. This book wasn’t just about healing the relationship between the sisters, it was about finding themselves, picking up the pieces that had broken them apart, and putting those puzzles back together. \

This book also showed how you really can’t judge another person just by looking at the persona that they portray to other people.

I feel like this is an especially relevant theme in today’s world. Look at Facebook, for example… How many people have people they just sort of knew from their past or even people who perhaps that they didn’t like too much in the past, but added them out of curiosity because you wanted to see what their lives were like, and even in some situations,hope that they got what they deserved? I can’t be the only one! Or how many people just add whoever to their Facebook even somebody who they might’ve just met in passing, at a party, or something, just to seem popular? I’m not really guilty of that one, but surely some people are.

For example, let’s say there’s a high school bully who tortured you in gym class, who seems to have the perfect husband, children, and life with their exotic vacations… That may be the persona that they show the world on social media… But maybe their perfect husband drinks too much and comes home and is a drunken asshole.  Or maybe their perfect children have some sort of issues of their own that they don’t share to the world. Or maybe on that exotic vacation they took to Paris, she was left in the hotel with the children, while their husband had his own agenda for the trip. Or maybe that bully had to deal with something like cancer in their life. Maybe these are some extreme examples, but I’m just trying to prove a point.

You never know what a person is going through in their life or has gone through in their life, therefore it’s important to not be judgmental [though, we all do it] and jump to conclusions before we know the whole story, in anything. Every single thing that happens in a person’s life, shapes them into who they are, whether that event was a positive or negative event, and without those events, people may not be who they’re truly meant to be. Just because somebody’s life on Facebook or Instagram or Snapchat or whatever seems amazing and glamorous, doesn’t mean that it really it.

Those paragraphs describe this book pretty well. This book is all about looking past the cover, and reading about all the chapters in somebody’s life, and understanding who they really are.

If you like reading about relationships, and events that shape people into who they are, and overcoming trials, this book is totes for you. Just don’t forget the tissues, you might need a whole box of them.

This book is also free on Kindle Unlimited .