This review will cover the 2nd, 3rd, and 4th books of the Breakthrough Series by Michael C. Grumley. I already covered book one in this review .

To calculate the rating for the series, I’ll rate the three books individually and then compute the average of the three. 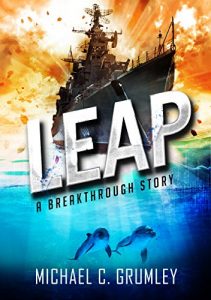 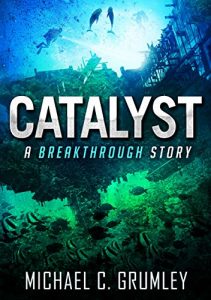 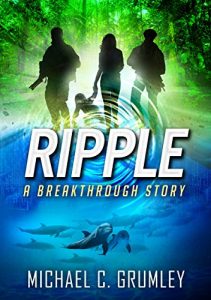 My dad was really excited that I ended up liking this series and recommended it to him. After he had read the first book, I called him to ask his opinion of it and he told me he enjoyed it, but was really surprised that I liked it because it was straight science fiction, and I’m not a science fiction fangirl. This led to a discussion of the science fiction book genres that I do like, I tend to like science fiction book based on current and relevant science, I would say that I like science that has a basis in micro or regular biology, especially if it deals with things like genetics, which is probably why I do enjoy books by Michael Crichton. I also like some science fiction comedy such as Hitchhiker’s Guide to the Galaxy , for example, and then sometimes I like books about aliens and other planets such as  Titan by Stephen Baxter, which I read back in like 2011. This phone call ended with my dad telling me that he was going to make me a list of science fiction books that he thought I might like and him being excited that I might be reading more scifi, since it is his favorite type of book.

Anyhow, overall this series got a 3.5 from me, which is pretty damn good, considering the most stars I would ever give something was five.

One of the things I did like about this series was that each book is definitely an individual book. The four plots of the four different books definitely go together, but each book is a different story, and I didn’t feel like I was reading the same story over again.

Michael C. Grumley also left the ending of four pretty open-ended, if he ever wanted to make a book 5 of the series, and I sort of hope he does.

The second, third, and fourth book take off from where the first book ended, but also introduced some new characters.

First of all, the dolphins, Dirk and Sally are awesome, and they just continue to be more awesome in the rest of the books:

I don’t really know how to sum up this story without really giving anything away.

I would say out of the three books left in the series after the first one, the second was probably my favorite. Not only are their kick-ass dolphins, but we also meet a kick-ass monkey named Dulce too.

Dulce and her “mom” DeAnn, are asked by this rich guy, who runs a wild-life refuge to investigate a murder, and try to recapture a monkey that was missing. Of course, as in all books, shit gets out of hand, and there’s a huge mystery unraveling and John Clay, Steve Cesare, and Alison Shaw have to save the day. And throughout the book, they discover something amazing that could change humanity as they know it.

From there comes the third book. So after the amazing discovery, it turns out that they’re not the only people who know about it, and they need to try to protect their discovery from the evil people who might use it to take over the world, or who will use it for their own gains and purposes.

Then in the conclusion of the series, it’s John Clay and Alison Shaw vs the world because they need to protect the discovery even more when they find a second source of it. But the Russians and Chinese also want it back since they think the US stole it, so it’s a race for time that takes our team to Africa so they can protect what they found from evil people.

Those are the books in a nutshell, and the best way I can think of to describe them without overly spoiling anything because there’s nothing worse than book spoilers, in my opinion, just think back to page 606 in Harry Potter and The Halfblood Prince , hoodlums driving their car with the windows open, and shouting out what happened. Even Justin knows about page 606, and he hasn’t read a single Harry Potter book in his life.

I would say out of all these books, my least favorite was probably the last one. It just sort of felt like the same story that the second book has told, but in a different setting and with different characters and I thought that was the weakest of all the books.

But overall, I really liked this series. It’s a mixture of everything you would want in a science-fiction series, it has action, aliens, technology, zoology, science, biology, military action, and even a little bit of love. This was also a complex series, there’s always like 2 or 3 different stories in one book, which made it very interesting to me, especially how all the stories were interwoven with each other.

Goddamn it, I liked a science-fiction series.

Read this series, I think you’ll like it. I really liked it. I liked it so much that I literally read all four books in it in about a week. I didn’t want to read anything else, I just wanted to read these books.

There are no trigger warnings really, there is a bit of violence and torture throughout the story, but I didn’t find them unnecessary or anything, they went with the plot and weren’t just there to shock. There are also no sex scenes or anything like that. This is a straight action-packed science fiction book.