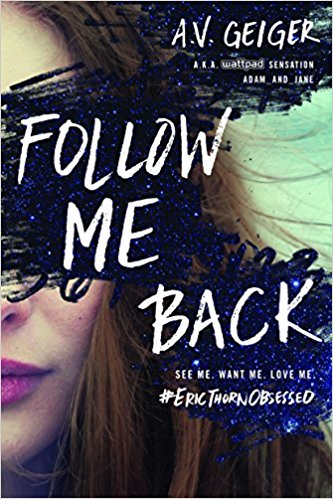 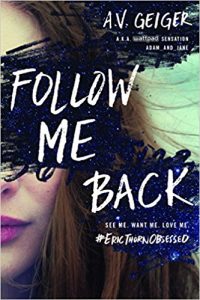 Follow Me Back by A.V. Geiger is a fandom book. I went through a month or so, last year, when I was getting ready to go to Comicpalooza so I could see/meet my favorite author, Jim Butcher, when all I wanted to do was read fandom books. A fandom book is book that revolves around a made-up fandom, some of them are spoofs of popular fandoms like Lord of the Rings or Harry Potter, or of popular musical artists like Justin Timberlake or somebody like that. Some of these fandom worlds are created superbly, in a way that you really feel like a fandom for whatever it is could really exist [see Geekrella by Ashley Poston, for example] , others are sort of done poorly [for example, I thought Fangirl by Rainbow Rowell was overrated, but I know other people love it]. Fandom books are stories that revolve around that fandom and the fans who like it in a fictional world.

Tessa is an agoraphobic. Something happened to her over the summer, and ever since she’s confined herself to her bedroom. The only way that she can escape her phobia is to immerse herself in the fandom world of Eric Thorn.

Eric Thorn is a musical artist, think Justin Timberlake or somebody like that. He is terrified of his fans. He thinks his fans are psychotic and obsessed with him, and it doesn’t help his paranoia when a fellow music artist gets murdered by an obsessive fan.  He decides to ruin his own image by trolling his fans.

He starts by trolling Tessa [@TessaHeartsEric] but instead of scaring her away, he realizes she might be the only person, who truly understands him, yet she has no idea that she is actually talking to the real Eric Thorn. They both start developing deeper feelings for one another.

Does this sound like Catfish the TV show yet?

It pretty much is.

Eventually Eric Thorn and Tessa decide to meet, though Tessa still has no idea that the person she’s been talking to is really Eric Thorn. She’s expecting to meet somebody else. But then of course, just like on Catfish: The TV Show, things take a turn for the worst.

I won’t spoil anything else from the book.

I will say that Eric’s attitude in the book was sort of annoying at times. He really hated his fans and was mad that they seemed more into him for how he looks and for their fantasies about him than the actual music he makes. I get that, but at the same time, he would’ve been nothing without the fans, who were obsessed with him, and you would think that he would be even the slightest bit grateful to them for the fame he has. I thought at times, Eric seemed like an ungrateful and selfish, slightly egotistical jackass.

I liked Tessa’s character. I don’t have agoraphobia, but I do have very bad anxiety, especially social anxiety, and I could relate to a lot of how she felt throughout the book. I’ve had traumatic incidents in my life that have definitely shaped how I view myself, as well as the world around me, and even my relationships with other people, and I thought AV Geiger portrayed anxiety very realistically and accurately.

This book is told in many different ways, there are police transcripts [and the first page of the book is a police transcript, so that’s not a spoiler], tweets, direct-messages, and narration. I liked how the author made it more relevant to today by using twitter, and she used technology well.

The book ends on a cliffhanger, but luckily book two comes out in June.

Triggers for kidnapping, mental health issues, and stalking. So if those trigger you, you’ve been warned.

I gave this book four stars. It was a solid story, and it roped me in. I also thought it was well written, and I liked how the author interwove technology throughout the story, and I look forward to book 2, especially because of the cliffhanger book 1 ended on!

#gandalfthewhite is very happy his humans are home

J wanted to play survivor and made a fire using fl

It's rainy but we made it to #oklahoma #roadtrip #

Caught another easter lily #cactus bloom before it

I don't know how to tell #ajaniguccigoldmane that

#gandalfthewhite is very happy his humans are home

J wanted to play survivor and made a fire using fl

It's rainy but we made it to #oklahoma #roadtrip #

Caught another easter lily #cactus bloom before it

I don't know how to tell #ajaniguccigoldmane that