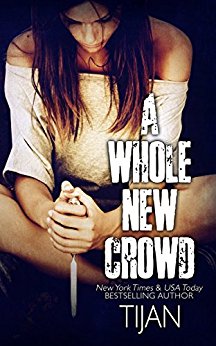 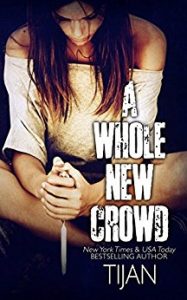 I never really know what to think about Tijan’s books. This is the second book I’ve read by Tijan. The first one I read was Ryan’s Bed, quite a few months ago, and I feel like I felt similarly to that one as I feel about this book.

It’s not that Tijan is a bad writer. She’s a really good writer. I guess it’s that I can’t relate to her stories, at all?

She succumbs to damsel in distress syndrome in all her novels. She portrays her female heroines as these supposed tough and kick-ass girls, but they always need to be rescued by an equally sexy bad-ass man, and apparently can’t survive on their own.

A Whole New Crowd is no exception to this.  A Whole New Crowd revolves around a girl named Taryn. Taryn lived in a foster home and she was friends with the local gangsters, hell, she even dated one of the gangster’s younger brother for awhile. She’s whisked away from her current foster family to a new foster family full of overprivileged rich white children, who are the definition of Affluenza.

It’s like an episode of gossip girl gone wild, but more like the later books in the gossip girl series, when you’re wondering why the hell Cecily von Ziegesar is still trying to write these books, when the plot lines went from a little special but bearable to desperation to find something to write about, so she can keep making that money using the Gossip Girl series names.

Taryn is just an annoying character. She’s supposed to be this kick-ass, cut-throat former thief, who got her popularity because she was so tiny that she could fit into anything and rob anything. Oh she’s also this amazing computer hacker too. She was supposed to be starting over and going from this bad girl to a good girl, sort of like Pretty Woman, when Vivan goes from bad girl prostitute to societal woman. But instead, within the first day she’s at her new school, her new school where apparently it’s totally okay to leave classes, tell a she’s leaving, and go fuck in a supply closet, she’s cornered by the most popular boy in school, who wants her to commit a crime for him, even though she promised her old gangster that she’d finally be starting over.

Then the entire book, even though Taryn is supposed to be self-sufficient and amazing, she depends on the aforementioned bad boy to rescue her. She needs her Prince Charming, just like Mackenzie needed Ryan to rescue her in Ryan’s bed. So much for gaining independence, being kick-ass, and starting over. She just went from one bad boy to another, and apparently can’t take care of herself.

I don’t even think the subject matter of this book is relate-able. The characters just had absolutely no redeeming characteristics about them.

There wasn’t even a lot going on this book, action-wise. Um cross that out, there was A LOT of action, if  you know what I mean there.

The conclusion at the end wasn’t really even that exciting. There was no build-up or anything, it just sort of happened.

I gave this book three stars, mainly because I think Tijan is a good writer, and this review reflects her writing ability, nothing else.

Plus you know, she’s a LiveJournal writer, and I gotta give some props since LiveJournal is the best place to meet wannabe writers and talk about all your deepest darkest secrets and fantasies.

In all honesty, I’d skip this book [and Ryan’s bed too], but than again Tijan just really isn’t my cup of tea…

but perhaps she’s yours?

I did read that A Whole New Crowd is the edited version of the book, and the original book The Original Crowd is a much better telling of this story, but I personally won’t be wasting money on it. Heck, I didn’t even waste money on A Whole New Crowd, it was free one week on amazon via Bookbub, and I “bought” it to have filler reading between good books since Ryan’s Bed, was at least better than this [not that I knew it, at the time].

What can I say… Tijan just wants all of that to stab you in the face because she needs all of her characters to be tragic.

I would say this book is probably for the more “young adult” age range of the teen/young adult category of literature. But considering most thirteen year old girls dress sexier and sluttier than me… what do I know?

But to each their own 😉 After all, I used to really like Twilight.