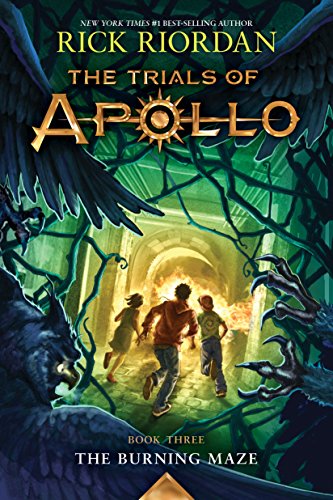 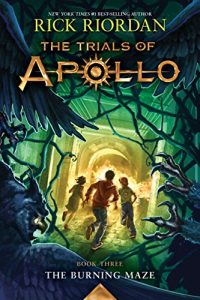 I’m going to have to be careful with my review for The Burning Maze because it’s book three of a five book series [with book 4 set to come out in Fall 2019], and I don’t want to spoil the series for anyone considering reading it.

I will say, however, that out of all the Trial of Apollo books, I think that this one was the strongest and the best, so far.

Basically, Rick Riordan started with Percy Jackson back in 2005. It was sort of like the Greek Mythology version of Harry Potter. Teenagers had a godly parent [one of the Greek Gods] and they went to Camp Half-Blood, which was basically Hogwarts, but a summer camp. They got sorted into different cabins based on their immortal parent instead of four different houses, and the cabins would compete with each other through the summers much like the Hogwarts Houses would compete with each other for the school year.

Anyhow Percy Jackson was really successful, and Rick Riordan really wanted to make that money, so he released the Heroes of Olympus series, which had series favorites like Percy and Annabel, but dealt more with Roman Gods than Greek Gods.

Then Rick Riordan released his Egyptian version of Percy Jackson, which was called The Kane Chronicles, and really wasn’t as popular as Percy Jackson had been. I read them, they were okay?  It was a lot of years ago that I read them and I don’t remember much about them, so they weren’t amazing like other book series I’ve read are.

Then Rick Riordan released his Norse version of Percy Jackson, about Magnus Chase and his talking sword, and Magnus just so happened to be the cousin of Annabel Chase, everyone’s favorite heroine from Percy Jackson,and even had a cameo from Percy, himself, in one of the books.

Those were much better than the Kane Chronicles.

But anyone, once Rick Riordan was on the cash cow, he couldn’t stop…

So he brought us The Trials of Apollo.

In the Trial of Apollo, Apollo, son of Zeus, has an ego problem. He’s a selfish asshole, who thinks that the world revolves around him and he does things without thinking about the possible consequences.

And Daddy Zeus get pissed off at his Immortal son, so what better way to punish an immortal than by making him into a mortal?

So now Apollo, is a sixteen year old mortal named Lester, who’s gawky and covered in acne, and doesn’t even have a real driver’s license, just a permit, and it’s up to him, and his gang to save Olympus and the only way Lester can restore his former godly glory is to find out why his Oracles have gone dark.

I will say though that the Apollo from the first and second book [or should I call him Lester?] will freaking annoying. In the second book especially, Rick Riordan was just off on his high horse [in the voice of Apollo/Lester] and just going on and on about inappropriate social commentary and homosexual relationships.

I personally have no issues with any of that and I consider myself to be very socially liberal, but he was just preaching on and on and on to the point, and trying to force social acceptance, where it made me not want to read the book. And considering this is a children’s series, probably for kids from 4th to 8th grade, it was very inappropriate.

I realize to be historically accurate, Apollo definitely was very open-minded when it came to certain activities,  and even in Greek Mythology, there were all sorts of interesting trysts and lifestyles, but there’s a time and a place for that, and I didn’t feel the place was within a novel aimed at upper-grade children. The emphasis in the book seemed to be on Apollo’s alternate lifestyle, and not the actual book itself. It felt like Riordan was trying too hard to attract an alternative audience for his books, and not to stick with the good stuff that he previously wrote, if that makes sense.  It was more of Riordan’s personal political agenda than an actual novel and story.

There was a little bit of that  in Magnus Chase too, but I didn’t feel like it was as much in your face like it was in the first two books of the Apollo series.

That being said, I think this book was the strongest of them all. It was also the best-written. Our two narrators Lester/Apollo and Meg have evolved, and they’ve become deeper characters. This book is also darker and more violent than the other books.

However that being said, this is not a happy book, there’s tragedy throughout the book, and it’s a different sort of tragedy than Riordan has given us in past books in the same series. There’s a darkness throughout this book that we’ve never seen in other Percy Jackson-esque books.

This book is good. The first two books were not so good, in my opinion, but you do need to read and trudge through those to get to and understand the third book, and I think this was one of the strongest books Riordan has released within in the Percy Jackson Universe, so it might be worth it to read them.

There are really no triggers in this book. There is some fantasy violence, but that’s really it, luckily Apollo/Lester becomes less egotistical within this book, so there’s a lot less about his personal life.

I would say this book is a worthy successor to the Percy Jackson universe,  and I’m glad I stuck with it even though Book 2 wasn’t really my thing. I’m glad Riordan has decided to make this a 5 book series as opposed to the 3 book series it was originally set to be, and I look forward to book 4 even though I’m salty I have to wait over a year for it.