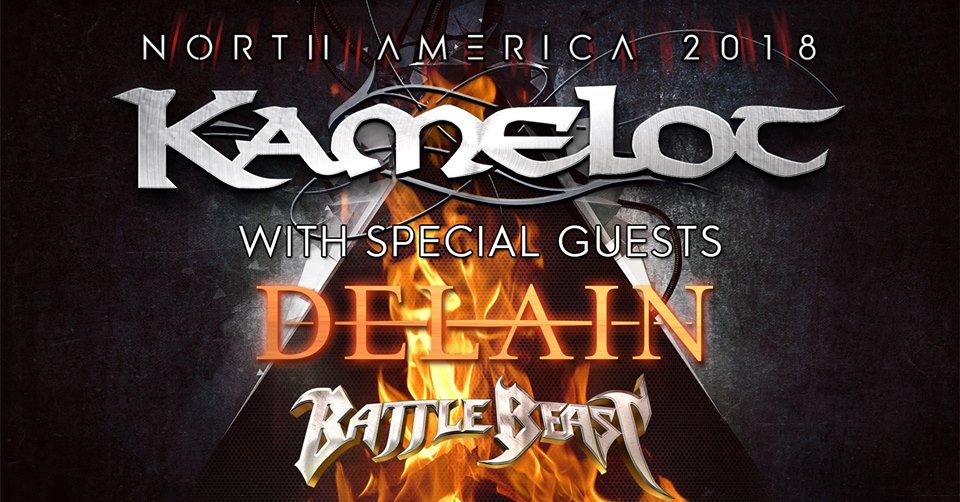 Have you ever heard of Kamelot?

They’re Justin’s favorite band. I didn’t really like them when I first heard them back in 2011, around when I first met Justin. It was a bit too emo for me. I mean it was heavy emo, but still pretty emo, I guess technically, Kamelot are considered to be power metal. Justin tried to nicely force Kamelot on me when I was moving to Texas, and we were stuck in a car for two weeks together, as we drove from New Jersey to Texas, and I’m pretty sure I told him to turn it off, and refused to listen to Kamelot for years.

Then something happened? I’m not really sure what happened, but somehow Kamelot grew on me. Then I became a fan. Now they’re rotated daily on my Amazon Music playlist that I listen to on my commute to and from school. We were supposed to see them live in 2016. Justin did go see them in 2016, but I ended up getting the flu for that concert, which is pretty typical when you teach tiny little children for a year, every day, so he went without me.

Then when they announced their 2018 North America World Tour, we had to go though we procrastinated buying the tickets for quite some time. Then at a friend’s Christmas party,  when we were both kind of drunk [Malibu and fruit punch FTW], we remembered that we needed Kamelot tickets, and we ordered them off my phone, at the party.

Months rolled by, and then finally May came, and I wasn’t sick with the flu this time.

The concert was at The House of Blues, which is one of my favorite venues in Houston. It’s a good size. It’s not over the top huge like NRG, The Woodlands, or the Toyota Center, but not too small either. It has a downstairs,and then a balcony upstairs. It reminds me a lot of Hammerfall Ballroom in New York City or the TLA in Philadelphia.

We actually got there before the doors opened because we overestimated how bad the Houston traffic would be going downtown.

I decided to go with an emo look for the concert, also known as wearing lots of black eyeliner and dark eye makeup: 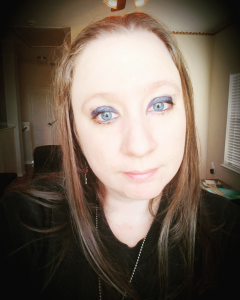 As soon as we got in, we headed to the merchandise table. Justin bought me a Delain shirt since I already had a Kamelot shirt, and he went to wait on the very long line to get the Kamelot tour shirt, while I tried to get us spots close to the left side of the stage.

I totally lucked out, and managed to get the very last spot against the rail by the stage in the pit. I hadn’t been in a pit, especially right in front of the stage in a pit since my Marilyn Manson days, which were circa 2005, before Manson sold out, and when I got to meet John 5 after the show. 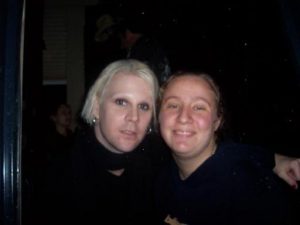 The bouncer and the photographer were there, and I started talking to them because I had nothing better to do. The bouncer was really nice. He was telling us all about he Gwar show he had worked [I’ve seen them in concert too, and it’s intense], and even gave us all water during the concert from the cooler that was there for the bouncers. And he was just an overall awesomely nice guy. The photographer and I compared pictures… Obviously his was better since he has that media pass and was able to bring his fancy cameras the show, but they were cool to look at. He also gave me some tips on how to become a concert photographer [my dream side job], and we compared Canon vs Nikon and mirrorless vs regular DSLRs. We also talked a little about Big Bend National Park since Justin and I are planning on camping out there sometime this year either during Thanksgiving or Christmas break.

I do apologize for not having any live videos from the show. I normally take videos and even have a YouTube page, where I post concert videos, but we were literally right in front of the speakers, in front of the stage, and all my camera picked up was basically noise and static and no music. It’s actually really torturous to listen to, I tried, so I just have pictures I took. Sorry!

The first band, Battle Beast, came on around 7:45, which was about 45 minutes after the doors opened. I put on my ear plugs immediately. Seriously people, WEAR EARPLUGS, I’ve never seen a concert without earplugs, and they don’t take away from the music, you still hear the music. Rock music is loud, ear plugs can’t drown that out, but they do save your hearing! I prefer the wax ones, Justin prefers the foam ones, whichever you pleasure is, just please wear ear plugs at rock concerts!

I knew nothing about Battle Beast and had never even heard of them before this show, but they did have some sort of cult following because I did see a lot of people in the audience wearing their merchandise.

They are a Finnish Power/Heavy Metal Band, who were established in Helsinki in 2005.

I’ve always really liked Finnish Bands- HIM, Nightwish, and the 69 Eyes, for example. I even used to have a category in my iTunes that I personally named Finnish Rock.

I really knew nothing about Battle Beast before the concert, so I don’t really have much to say about them.

They reminded me a lot of female version of Hammerfall, which is a compliment. I also feel like they’d be great background music for a Saturday of playing D&D with your friends, also a compliment.

I didn’t hate them. I thought they put on a really good performance, and the audience was really into them.

Here are some pictures that I took of their set: [click to see bigger versions] 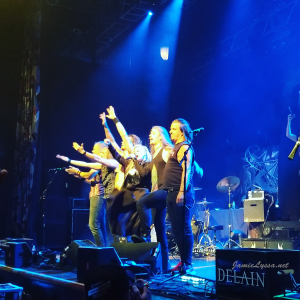 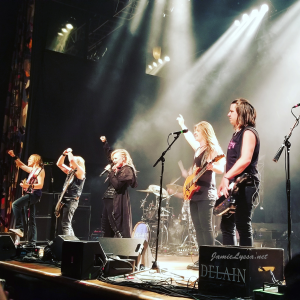 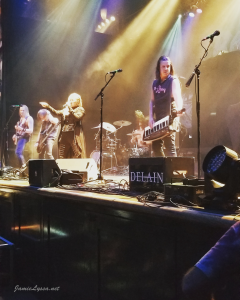 Next on deck was Delain.

I was a little more familiar with Delain than I was with Battle Beast.

Justin likes Delain a lot, so he tends to play a lot of their stuff when he’s driving and what not. Though, he knew a lot more songs from their set list than I did.

Delain are from Zwolle, Sweden. They’re considered to be a  symphonic metal band, which basically means they have the same sort of sound as Nightwish or Within Temptation, in face, Delain was actually formed in 2002 by the former Within Temptation keyboardist. Symphonic metal, to me, at least, means that it’s rock, but it has a lot of orchestra like sounds to it- think violin, cellos, along with the regular instruments you usually find in rock bands.

Here’s we are the others:

I didn’t really know a good majority of their songs. I knew “We Are the Others” and have always really loved that song, and singing it in my car when I’m stuck in awful traffic on Houston Highways, and it sounded really good live. I did know “Get The Devil Out of Me” and “Mother Machine,” but that’s really it. Justin was more familiar with the other songs, they mostly played songs from their new album.

Charlotte Wessels, the lead singer, has a really great voice. She also had a lot of energy, and she interacted with the audience a lot. The crowd was also really into them. Justin really enjoyed their performance. 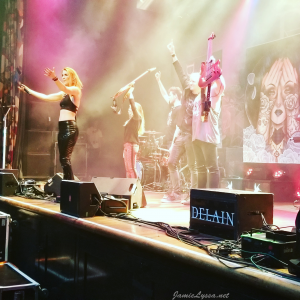 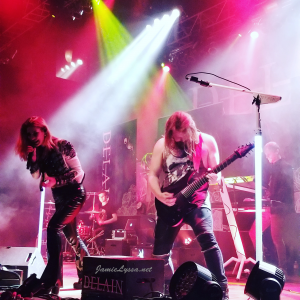 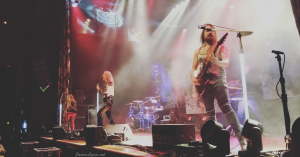 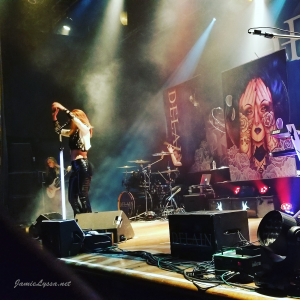 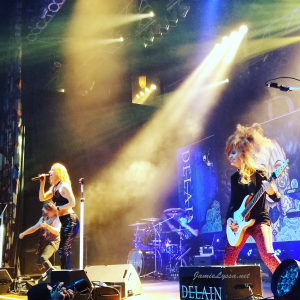 Justin and I actually saw the guitarist from Delain, Merel Bechtold, as we were leaving the venue after the show. She was walking down the escalator in front of us, but she was trying to be discrete, so we didn’t bother her or anything.

It’s from Ghost Opera and a highly underrated song! When Justin and I were driving back from a road trip, last spring, and we were cutting through the middle of nowhere New Mexico, and we had no radio signal or anything, I think I played this song on my iPod, on repeat, at least ten times in a row. I really wish they would play it live, but alas, they don’t anymore. The Black Halo also has some great songs, but other than March of Mephisto, they don’t really get played live.

Before I get into the songs, let me just say that Lauren Hart is amazing. She’s this tiny little thing with an incredible voice. She can sing, and then she can do dirty vocals like Dani Filth from Cradle of Filth.

I’m not really familiar with their new album. I’ve heard the songs a few times, but not enough for them to stick to me like their older stuff does, so I’ll just write about the ones I know.

Insomnia was amazing. It’s always been one of my favorite songs from Haven.

The crowd went the craziest for the Haven songs. Every-time the band played a song from Haven, the crowd went absolutely insane.

I enjoyed hearing The Great Pandemonium because it was one of the songs that really made me rethink my original stance on Kamelot.

Veil of Elysium was pretty epic too, except I thought the performance could use a bit more of the dramatic hand gestures that the band is known for ala Roy Kahn.

March of Mephisto is always a crowd pleaser and I love that song, and the crowd loves that song.

My one complaint and I don’t even think it’s even a complaint, more of a personal preference is that there wasn’t enough nods to their older shit. I really wanted to hear some Ghost Opera, Black Halo, and Epica. I understand that they are touring to support their newer stuff, and I would say the general fanbase that was at the concert, definitely preferred their newer sound, but personally, I wish there was one or two more older songs just because that’s what I like. [GIVE ME HUMAN STAIN DAMMIT]. It’s sort of like when I see Trans-Siberian Orchestra every winter, and I want to hear their older Savatage stuff. TSO is amazing, but they were Savatage before they were TSO, and I want to hear the stuff that helped them make their mark on the music scene.

So that’s just me.

Kamelot sounded amazing and were amazing. Their show rocked. The band has so much energy and they really brought it to Houston. The crowd loved them, they loved the crowd, and it was a night of epic music. It was my first Kamelot show and it sure as hell won’t be my last, I look forward to the next time they come to Houston, whenever that is. I really enjoyed the concert. 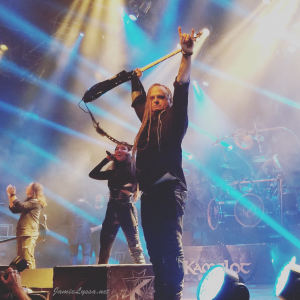 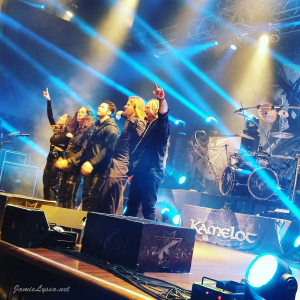 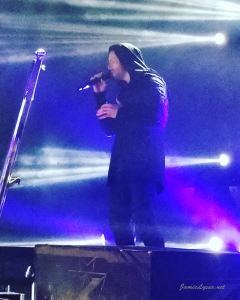 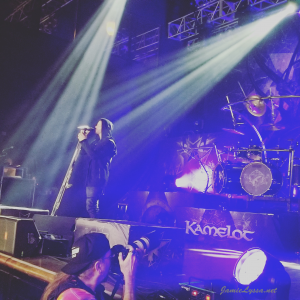 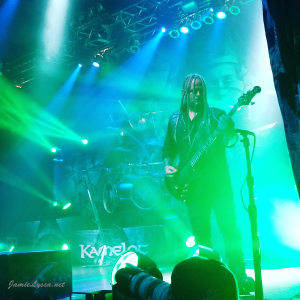 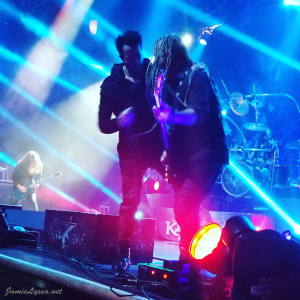 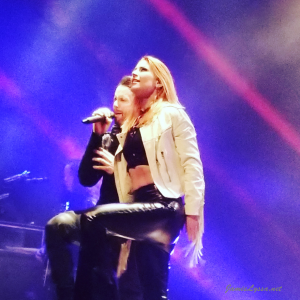 In conclusion: It was a great show, I loved it, and it was totally worth it to get home around midnight and have to wake up at 5 am the next day for school!

My name is Jamie Lyssa. I have 5 cats, and I’m a special ed teacher. I’m a Slytherclaw [with a touch of Gryffindor] and an INFJ. I like reading, concerts, photography, road trips,  video-games, and I am highly addicted to caffeine.  This blog is my little corner of the internet. Expect highly sarcastic book reviews, movie reviews, concert reviews, trip reports, and random ramblings about my life.