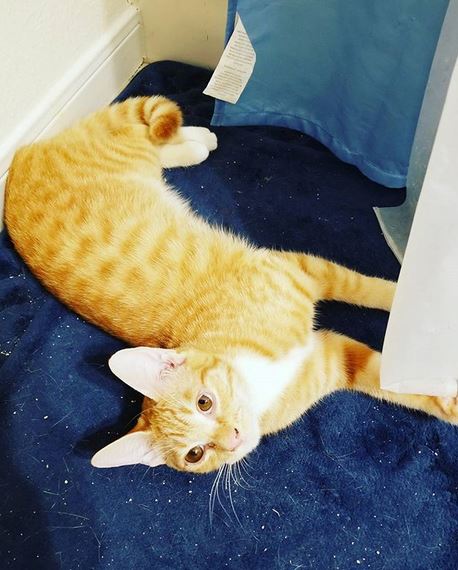 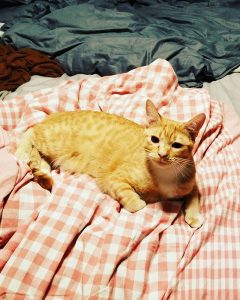 Yesterday I had to say goodbye to my kitty Espurr as she crossed the Rainbow Bridge.

I found Espie in May 2017. Well she was found at my school in May 2017, along with her brother. They were two weeks old and had been abandoned by their mother and had been found under one of the portable classrooms. I took both the kitties home, I was keeping Billy, her brother for two weeks before another teacher was going to give him his forever home, and I kept the girl kitten, who I named Espurr after the Pokemon. 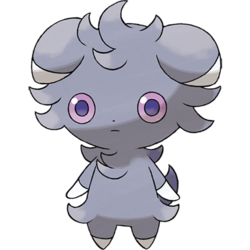 Espurr was born with feline herpes. She was only a few ounces when we found her, and we bottle fed both her and her brother. 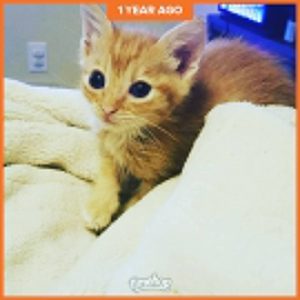 Her brother eventually went to his forever home, and she moved into our bedroom. We have several other cats, but we decided to keep Espurr in our bedroom and bathroom. That sounds crueler than it actually was. Our bedroom/bathroom is literally bigger than our first apartment was, and about the same size as our kitchen and dining room, so she had basically a whole apartment to herself. We decided to move her in there because our other cats can be really mean because they’re always fighting for dominance, and she was so small and we were worried that they’d pick on her or hurt her. Also, we didn’t want her to spread herpes to the other cats. But really Espurr had the best deal out of all the cats because she got to sleep with us and see us constantly.

Espurr didn’t have a mean bone in her body. She was the sweetest cat you will ever meet. All she wanted to do was love you and be loved and purr. She loved stealing our hair ties and playing with them. She loved watching Doctor Who, whenever we would put it on the TV, she would jump on the bed and be attentive. I had conversations with her every day when I got back from school about how my day went, what students drove me crazy, the traffic, anything I could think of, and she would just mew excitedly and cuddle. She also loved the shower. She would watch us shower, and as soon as we finished showering, she would go into the shower and lick up an excess water.

She was also the cat that bonded with me the most. She saw me as her mommy. We have other cats like I mentioned, but two of them gravitate towards Justin, and the other ones are sort of indifferent and like/hate us both the same, but Espurr loved me and I loved her to death. We had a bond.

A few weeks ago, Espurr just stopped eating. It was the weirdest thing. This little kitten loved food, and she suddenly stopped wanting food. She would sniff it and then she would just walk away. We tried changing her food, we tried bribing her with different flavored treats, we covered food in Parmesan cheese, we did everything we could to get her to eat, she just had no interest in eating. She also became withdrawn and less affectionate than she had been, and spent a lot of time sleeping.

Her brother Billy died in May. The teacher who took Billy home told me that he climbed up a tree, and the tree branch snapped, and Billy broke his neck and passed away. So maybe somehow Espurr knew about her brother.

We took her to our vet, who thought maybe she swallowed a hair tie because he saw something suspicious on her x-ray. He recommended we take her to the 24/7 Animal Hospital, so we did. She wound up staying there for about a week as they ran tests, and tried to rehydrate her with IV fluids and get her to eat. Eventually we got a diagnosis, Espurr had pancreatitis, and from not eating and hepatic lipidosis, also as a result of not eating. They decided to put a feeding tube in her, and we took her home with a feeding tube. 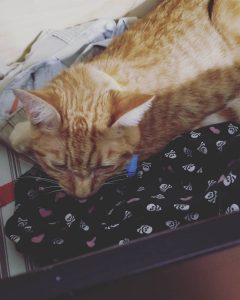 [the blue is her feeding tube]

They thought she had a pretty good prognosis and would eventually start eating on her own. We tube-fed her for about a week, and she took it like a champion even though we could tell it wasn’t her favorite thing. For awhile, after being tube-fed, she even had her old energy back and just wanted to cuddle and be loved and chase hair-ties.

Then this weekend her feeding tube broke. Justin went to go feed her, and as he was pumping the food into the tube, the food exploded everywhere, and we realized the tube had come out. I don’t think Espurr purposely ripped the tube out or anything, she was an active cat when she was feeling better, and she did this shake like a dog does when its wet, all the time, and we think that loosened the sutures that were holding the feeding tube in place. We rushed her back to the hospital, the doctor said she was stable, they put a bandage around her neck, and told us to give her 48 hours to see if she would eat on her own, or else we’d have to get another feeding tube for her.

When we got home, we tried to feed her. Justin got her to eat some cheez-its, but she still wouldn’t touch her food. The next day we got her to eat a tiny bit of wet food covered in Parmesan, but we knew that she wasn’t going to eat on her own, and would need another feeding tube.

Our vet, who’s awesome, by the way, agreed to put a feeding tube in her, so we wouldn’t be nickel and dimed at the animal hospital, which basically charges like a regular hospital. The surgery was set for yesterday.

The vet called me at around five pm and asked me to come in. So I went to the vet, and he showed me the x-rays he had taken of Espurr before they were going to put her new feeding tube in. She had pieces of rubber stuck in her stomach from the last feeding tube. We’re not sure how they got there, but they were there and on the x-rays. He said we could wait and see if she would throw or poop them out, but since she wasn’t eating, the chances of that happening were very unlikely. We could try to get it removed via an endoscopy, but that still wouldn’t guarantee that she would eat and she would still need more surgery to put a feeding tube in. Or our vet offered to do surgery on her and remove the tubes himself. But again, that wouldn’t guarantee that she would eat and it would a really tough recovery and she was already so weak.

It was the hardest choice I had to make, but I decided to put her to sleep. It would’ve just been cruel to force such a sick and weak cat to go through so much more surgery just so I could have more time with her. And the worst possible thing would’ve been if she either died during surgery, or survived the surgery, but then had a very painful death as she recovered from the surgery because she was so weak and sickly. She deserved better than that, and unfortunately better than that meant euthanasia so she could stop suffering and being in pain.

[her at the vet yesterday, when I got my last thirty minutes with her]

I spent about thirty minutes with her in a room after the vet closed playing with her, petting her, and telling her how much I loved her, and lots and lots of crying… I’m even crying when I write this post. I held her through the entire thing. In case you’re wondering what it’s like, I’ll tell you. First the vet gave her a shot to put her to sleep, it took maybe five minutes before she fell asleep, then he gave her another shot to administer the euthanasia solution. She was so dehydrated that it took him awhile to find a vein, and when he did, he had to use the smallest needle he could find, one he would use for a newborn kitten. He told me it took 2-10 minutes for a pet to cross the rainbow bridge, it took about a minute with Espurr, that’s how sick she was.

They made me a paw-print of paw, and framed it for me, and I spent some time with her before they took her away. She’ll be getting cremated and we’ll be sent the ashes when it’s done.

It was the hardest choice I had to make, but I know I made the right choice. It’s just sad, she barely had a year of living, but at least in the year she lived in our bedroom, she had the best life, and two people, who really loved her. She’s not suffering or in pain anymore. She’s crossed the rainbow bridge, and I hope I see her again someday. 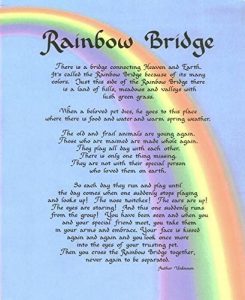 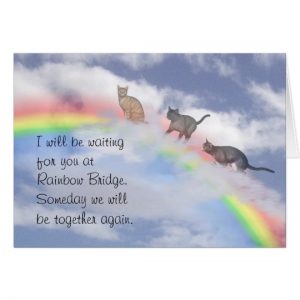 I hope we gave you the best possible life that you could ever have, and I loved you so much, and I still love you.