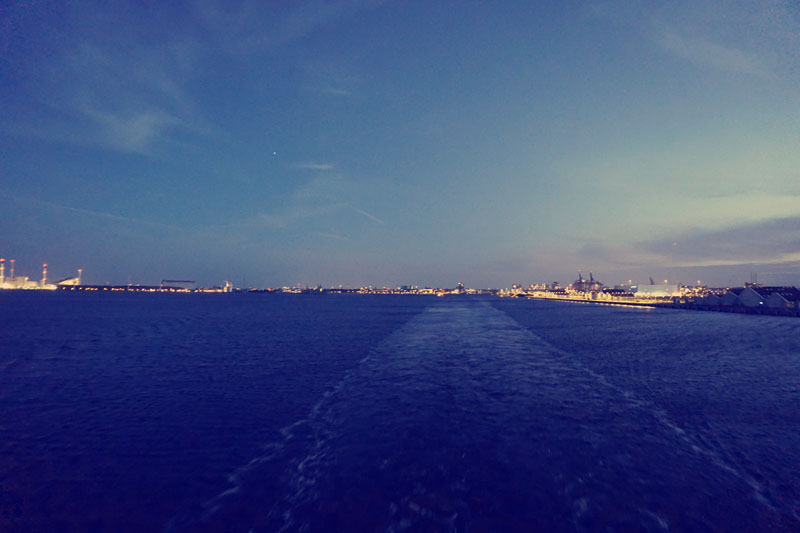 Really I wanted to blog about how beautiful Copenhagen is, and all the wonderful things I should have seen like The Little Mermaid status, or the palace that Hamlet was based around, or Tivoli Gardens, but instead I got a really unique tour… A tour of the Copenhagen Hospitals. 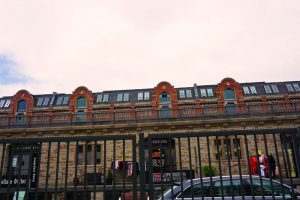 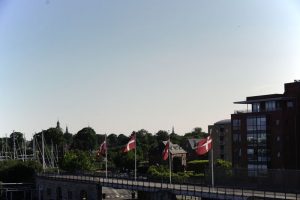 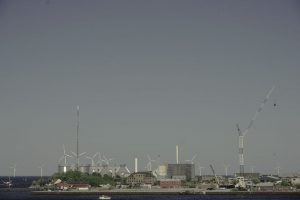 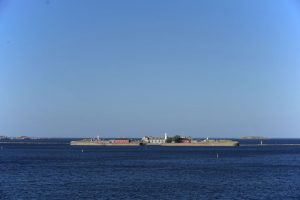 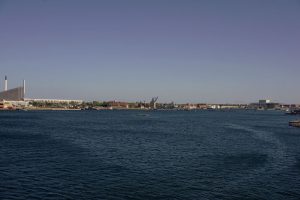 [basically all I got to see of Copenhagen, what was outside my balcony, or outside the ship]

It all started when I went down to the medical center to get my bandages changed. The doctors there weren’t happy that my boob was still oozing pus, and were really worried about stitches, and started talking about all these other things that I blanked out on, but the conclusion was they thought I should go ashore to see a specialist. 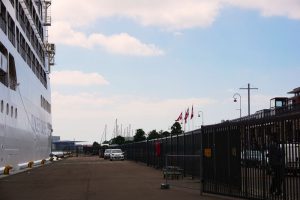 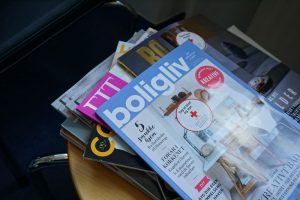 The doctor at the first hospital was basically an internist. He looked at my boob, and said the stitches were still intact, but I did have an infection, and he referred me to the other hospital. Nothing like strange foreign men checking out your grossly mangled boob to pep your trip up.  He was nice enough, but he didn’t really speak very good English, and I didn’t comprehend most of what he was saying.

The second hospital was where we saw a plastic surgeon. They agreed that I had an infection, and they swabbed the boob boogers, and took blood to see if I had an infection. The plastic surgeon there was very nice, and she spoke excellent English. The phlebotomists were actually really good, and I barely felt it when they took my blood, which says a lot for their talent because I have awful veins.

They all kept asking me the same thing… do I have fever? No. I don’t have a fever, at all, in fact, for the most part I feel absolutely fine. My energy is the same it always is. My heart rate is fine. I don’t feel sick, at all. I have pain, but I’ve had people poking and prodding at open wounds on my chest for two days, and I feel like pain is to be expected with that. The pain was a little too much to handle today thanks to 48 hours of people poking and prodding me in very sensitive places, so I had to take a pain pill.

My blood work came back fine. It seems to be a localized infection in my boob. The doctor prescribed me a z-pack, which I’ve taken a million trillion times, and she said my bandages need to be changed by the medical center every other day. They warned me that I’ll probably have bad scarring under my right boob. But that’s really a mostly superficial thing and it doesn’t really bother me. It’s not like I’m going to be flashing my boobs to everyone I see, and if it ever bothers me in the future, there are scar revisions and skin grafts and stuff, but bad scarring is probably on the very low spectrum of my list of worries.  My right boob has been the source of so many problems, so I wouldn’t say I’m surprised that there’s something wrong with it… But why the fuck did it have to wait till I’m in mother fucking Europe to appear?

I have no idea what caused the infection. It could be anything. It could be sweating and having no AC in our house for a week. It could be something fell in there and got absorbed into one of the open wounds since skin heals weirdly [it heals in layers]. It could be from the recycled air and pressure on the plane. Who the fuck knows. But it really fucking sucks. It’s an unfortunate freak coincidence.

On the bright side, I don’t need surgery, though they did advise me to see my doctor when I get home. I have an appointment like the day after I get home, so that’ll be done. I am not stranded in a foreign country. They told me if I feel fine [which I seriously do, I don’t know why people don’t believe me!] I can do easy excursions [which all of our excursions are because of my mom’s knees], so hopefully I get to see other countries and actually take pictures of them, instead of just off the balcony of our suite. I hope things either get better, or remain the way they are [as opposed to getting worse] so I can enjoy the rest of the cruise.

Tomorrow is a sea day [and I plan to sleep really late] and then we go to Tallinn. I’ve never been to Tallinn, I have no idea what’s in Tallinn. I think it has a lot of castles and things from what I’ve read.

After I was released from the hospital, we took a taxi back to the ship. Taxis are expensive in Copenhagen! A 20 minute ride from the hospital to the pier was like forty-eight American dollars! That’s insane! I called Justin, well technically, I had to text Brian to get Justin [they work at the same place] since Justin wasn’t answering his phone [he said it didn’t even ring], but eventually I got in touch with him and updated him about the situation, and then had a pity party for one on the balcony.

Mom offered to take another overpriced taxi to Starbucks for me, so I could get a coffee, and a Copenhagen mug since I collect Starbucks mugs from around the world. But I wasn’t in the mood because I was depressed and it would just remind me of how I spent the entire day in Copenhagen at two freaking hospitals. Though I do appreciate the offer. She said one day we could come back, on a trip, and tour Copenhagen and do all the things we didn’t do now, and I’ll get my mug then. I didn’t even bother to buy postcards because… what was I going to write?

Dear So&So, Copenhagen was great, I spent the entire time going in and out of hospitals.

Though I suppose in the bright side, I got a lot of random compliments on my Linkin Park tee-shirt that I wore today.

We went to dinner around seven thirty. It was open seating since we were in port til late. In a way, that made me happy because I really wasn’t in the mood to be social or chatty, I was sad and pretty depressed, and close to tears at dinner, well basically I’ve been crying on and off all day.  We found the section with our junior waiter and sat there. The head waiter, Marius found me some yogurt since I need to take yogurt with my medication to avoid stomach issues, and our junior waiter  Gerhard even went to fetch me more yogurt, so I could keep it in our fridge and eat it with my breakfast tea that room service brings me every morning [they’re sort of my alarm clock. When I want to wake up, I order room service to deliver… I usually just get coffee or tea].

For dinner I had a fruit plate for an appetizer, which was really good, all the melon was really sweet and delicious. Then I had a shrimp Caesar salad for a meal. And a creme brulee for desert. 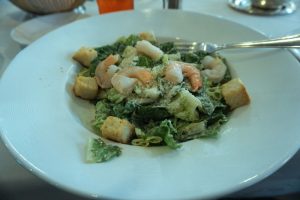 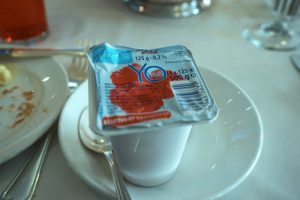 [thought apparently I only took pictures of my salad and yogurt that day for some reason. I failed #foodporn]

At least the sail-away from Copenhagen was beautiful [we left the dock around 10:30 pm because there was an excursion at Tivoli Gardens, at night] 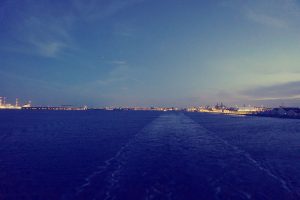 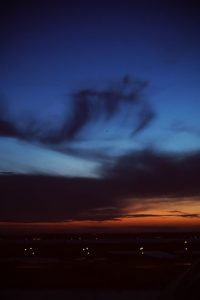 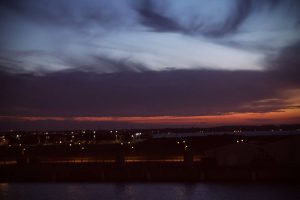 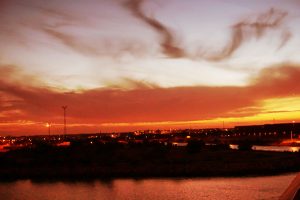 So that was my day.  It was definitely exciting, but not exactly in a good way?

I’m trying to move forward from the disappointment that today was, and look forward to our other ports, but today just wasn’t a good day. But right now, I’m pretty stuck in my mindset of pity party for one.

Hopefully tomorrow will be better.