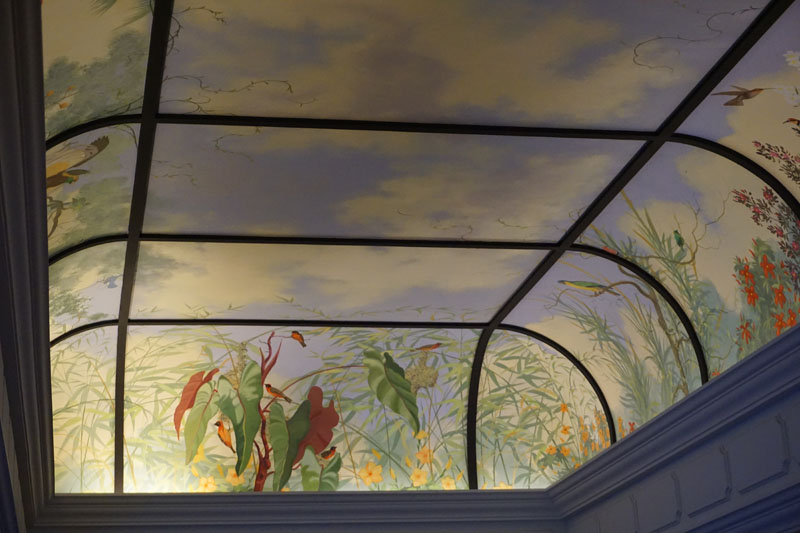 TRIGGER WARNING: THERE WILL BE BOOB TALK, AND GORE TALK, AND INFECTION TALK, AND GROSSNESS, you’ve been warned. [I mean it’s not like I enjoy talking about my boobs every night, but it’s become relevant to the trip unfortunately!]

Last night was rough. The captain really likes to go really fast at night, and I mean we did leave Copenhagen late because there were some later excursions, and they got back a little bit late, so perhaps he was trying to make up for lost time? Or maybe cruise ships always travel faster at night, and I just don’t notice it because I’ve never been in the back of a ship before. But man do you feel movement in the back of the ship. I was lying on my bed, and I could literally feel every vibration and hear every thing vibrating in the room, and it was driving me insane and causing me insomnia. I eventually gave up trying to fall asleep in my bed, and instead woke my mother up at three thirty in the morning and asked if I could sleep with her because her bed was higher from the ground. That seemed to work because I fell asleep there.

The nice thing was that it was a sea day, so I got to sleep late. But when you don’t fall asleep til three in the morning and get up around 11, it still doesn’t seem like enough sleep to me since I struggled falling asleep to begin with.

After I woke up, I played some Bravely Default, and I am happy to say that the boss fights in Chapter 8 were actually a challenge for my team, I don’t think I’ve had a challenge since Chapter 5, in fact the game got so easy for my team, that I literally turned off battles in Chapter 6 because there was no point in fighting anything if my level was maxed out and all my jobs were mastered. Yes I know, maybe only one person who actually will read this will care about my video-game progress. Once I beat Bravely Default [and I’m really close], I might start Bravely Second, or go back to the Fire Emblem Awakening game I started a few weeks ago.

I changed my boob pad this morning. [I DID WARN YOU ABOUT BOOB TALK!] There was discharge. There wasn’t a lot of discharge. I mean there was more than I would like since I dislike boob discharge and infections a lot, but it was still there. The discharge was more bloody than green? I think that’s a good sign. It’s not just green. I think when there’s blood in it, it means your body is fighting the infection. I mean I have no idea what the terms are to google such a thing [I’ve tried], but it went from being just bright green to being mostly bloody with a little green, so I think that’s some improvement? I also started my antibiotic today. When I changed the pads tonight, it was pretty similar, it was mostly red blood with a little bit of green.

Justin called my plastic surgeon yesterday, and he was in agreement with the treatment I was given in Copenhagen, he agreed with the antibiotic they prescribed [a z-pack], and to get bandages changed in the medical center every other day. I still feel fine. I don’t have a fever. My energy is fine. I’m me. My heart rate is fine. I’ll go to the medical center to get the bandages changed tomorrow afternoon after we go to Tallinn [I won’t miss another excursion, and it’s only a few hours anyways], and they have a habit of making a mountain out of a molehill [though I mean I can’t really fault them for that because they’re used to dealing with a much older population and it’s better to be safe than sorry], so we’ll see what they say when they change the bandages, but I mean I get why they act the way they do with liability issues and such things.

I’m mostly not in pain. I tend to get pain, at night, when I finally settle down, but I wouldn’t say it’s severe pain or anything. It just sort of feels like a gigantic gap in the bottom of my boobs, which I guess technically is what it is.

We went to lunch around twelve-thirty or so. During sea days, there’s lunch in the main dining room. We sat with a pretty nice group of people. Two of them had been teachers, and they were interested when they found out I was a teacher. One of them asked about Hurricane Harvey and how it impacted my students. We talked about the west coast, and it was just general pleasant conversation. I had a garlic potato cream soup for an appetizer, and a tuna melt for a meal. The deserts all had nuts in them, so I went upstairs to the buffet, and found Marius, our head waiter, and asked him what had nuts and what didn’t [nut allergies aren’t anything to fuck around with or take a risk with, trust me]. He wasn’t sure, so he actually went downstairs and got the pastry chef and the pastry chef personally told me what had and didn’t have nuts. I ended up with a banana cake that tasted like banana pudding and was delicious, and some jell-o for my mom.

After lunch, mom slept on and off and watched random stuff on TV. I read. I finished two books today. Both were enjoyable. I also started a third book. Sometime between book two and book three, I decided to go to the buffet to get a hot chocolate from the bar there [and mom requested some sandwiches and scones], and the bar tender remarked how I had the highest drink package [as in I can get booze for free] and he asked me why I didn’t drink. I told him I just didn’t really drink much. He asked if I was a good girl. I told him I was a good girl, I just don’t really drink unless I’m with friends. He asked what kind of alcoholic beverages I liked, and I mentioned Tequila Sunrise and Sex on the Beach. He said he also liked Sex on the Beach and promised next time he saw me [which will happen since I get hot chocolate a lot] he’ll make me the best Sex on the Beach ever. I will rise to that challenge and taste it, if he keeps his word.

I read til a little before dinner time and then took a special shower. Since I can’t get the gauze on my boobs wet, it’s always interesting to shower. The shower heads are removable, so I basically use them to wash everything but that area, and it’s an interesting and strange experience, especially since I really like it when the shower water is boiling hot and submerging myself in it. I’ll be happy when I’m allowed to take a real shower again. I’ll also be happy when this fucking infection goes away and my incisions close, whenever the fuck that will happen.

I don’t regret my breast reduction, I’ve been overjoyed with their new size and not having ten extra pounds on my chest, and also not really having back pain anymore, but the healing process sort of sucks ass. I know a localized infection is a common yet unfortunate side effect, but I’m not a fan and just want to feel normal again. I want all my incisions to close [and unfortunately I think that will be delayed thanks to this trip] and all the discharge to stop.

Dinner was uneventful? Only the couple from Chicago showed up. I think the Asian couple switched tables because I think we were all a bit too boisterous for them and I think they wanted a table for just the two of them, and the other couple just didn’t show up. Maybe they went to the buffet or a specialty restaurant or something.

For an appetizer I had split pea soup with ham and for a meal I had chicken fingers and sweet potato fries. Marius also made sure to bring me yogurt since I need to take yogurt with my meds. I really wanted this ice cream cookie thing for desert, but it had nuts, so I I had a cheesecake and swirled chocolate sauce on it to make it a little different than it had been the day before? 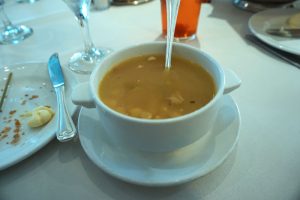 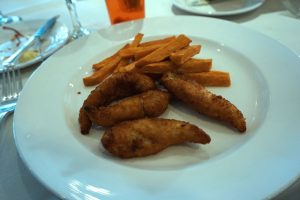 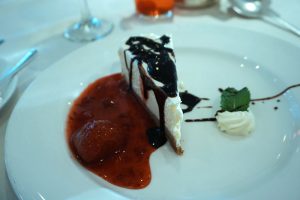 I’ve learned, during sea days, I definitely prefer eating breakfast and dinner, to eating lunch and dinner… lunch and dinner are too close together, which makes dinner less enjoyable than it should be.

After dinner, I went to the ship library and started reading a Piers Anthony book [Demons Don’t Dream], which I don’t think I’ve read since high school, and killed time til the sunset. 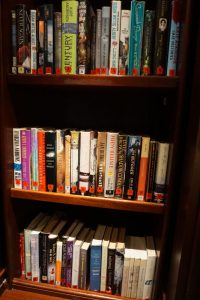 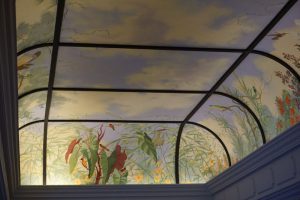 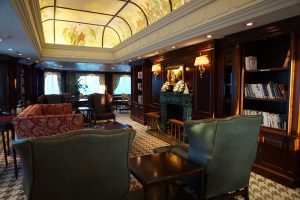 Then I went to one of the upper deck and took a sunset picture. It was amazing how low in the horizon the sun was, and also amazing that the sunset isn’t until 10:30 pm. 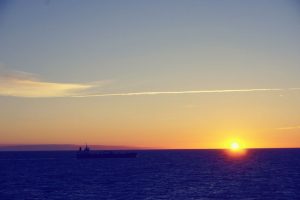 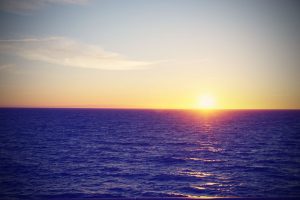 Tomorrow we go to Tallinn, which is the capital of Estonia. I know nothing about Estonia except that in an episode of Viva La Bam, one of the characters, Raab Himself goes to Estonia to find his former mail-order bride, and I think that was in season four or five, and yes I am embarrassed I used to obsessively watch that show… but Ville Valo used to make cameos in it and I LOVE HIM [the band, and Ville is hot too]… Have I mentioned how excited I am to go to Helsinki? I want to find Ville, and tell him how much I love his band and music… but I’d probably wind up in jail if I pulled a stunt like that… I’ve just really always wanted to go to Helsinki, I think my obsession with HIM [the band] is a part of that.

But anyways I’m excited to see some place completely new to me, a place I’ve barely ever heard of. Hopefully come tomorrow, I really will have pictures of things that aren’t places on the ship or food, and hopefully I’ll have interesting stories to tell about Estonia.