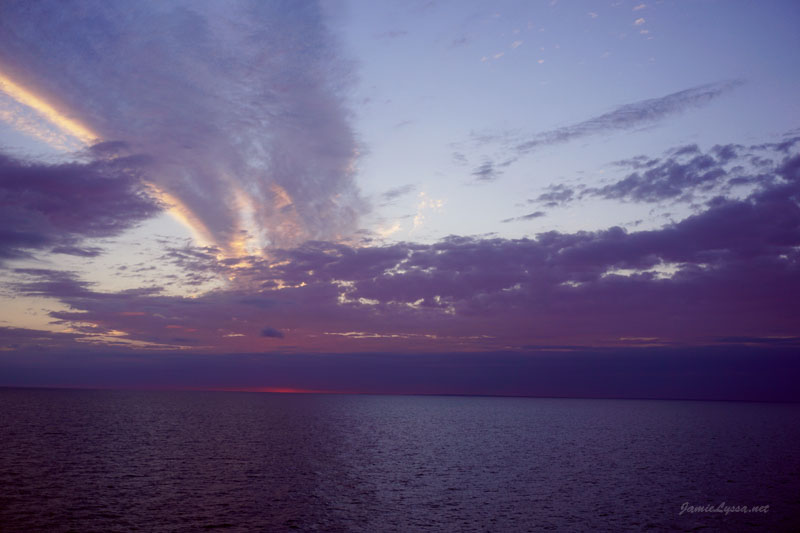 We didn’t have an excursions planned today, so it was basically like a sea day, only we weren’t at sea. When I woke up this morning, there were six ships in port. Six cruise ships, one was another Princess Ship [the Regal Princess], some German cruise ship called Mein Schiff, a ship called the Aida that had freaky eyes and lips painted on its hull, Costa Magica, and the Serenade of the Seas [and of course us, which makes six]. I think all the ships were in Russia for the World Cup because the quarter semi-finals were that night: France vs Belgium. I heard the city was CRAZY packed with traffic. One excursion was even about an hour late coming back to the ship because of traffic, so we left Russia late, but I don’t think Helsinki is that far from Russia, if you can drive there in two hours, so I don’t think it’ll affect tomorrow, at all, at least it better not affect tomorrow…Helsinki or bust! 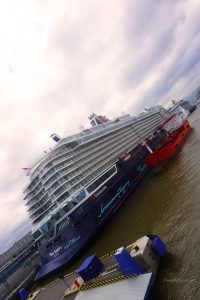 Anyhow so like I said, it was a lazy day for us. So we slept late. I woke up around ten or so, and ordered some melon and hot chocolate for breakfast. We watched A Wrinkle in Time on TV, which was okay. It wasn’t very similar to the book, they left a lot of things out from the book, including main characters, like Meg’s twin brothers, but it was an okay movie. Around noon or so, we went up the buffet for lunch. I had a tuna sandwich, some mashed sweet potatoes, and some roasted vegetables. I had some sort of sugar-free chocolate mousse for desert that tasted like sugar free chocolate pudding to me, but was still edible.

I spent the afternoon basically doing nothing. I would like to point out that there is things that go on throughout the day on the cruise ship, you don’t need to do nothing. There are all sorts of games, tournaments, arts & crafts, shows, a casino, a spa, official and unofficial social meet ups, and things like that, I just prefer to do nothing. And by do nothing, I mean I play a lot of gameboy 3ds [moved onto Fire Emblem Awakening from Bravely Default] and/or read books on my kindle while I stare out the glass doors of our balcony, at the water, and usually at some point, I go up the bar on the 9th deck and get hot chocolate. That’s literally how I spend a typical sea day [or a not at sea sea day like today was].

I also had to get my bandages changed at the medical center today. They reported I’m doing much better. I had discharge, but it was more yellow than green, yellow/red discharge is much more normal. They also told me that they think the holes under my boobs are starting to close. They do think the hole by my right nipple will take awhile to close, but that’s not unexpected nor abnormal really. I had a hole by my left nipple that opened up the second week after my surgery, and just now it’s starting to scab over. But overall, I’m doing way better, when they were cleaning the wounds, it didn’t sting nearly as much as it did two days ago, and I feel pretty good. I still don’t have fever, and my heart rate is fine. The pain is manageable, and except for some occasional itching, I’m doing pretty damn good.

We left port about an hour later than expected due to that delayed tour. It was actually interesting to watch the ship disembark from Russia, since we were basically boxed in on all sides, the ship had to back out sideways, sort of like you would if you were parallel parking, only it’s not a car, it’s a cruise ship.

Now we’re off to Helsinki, I am probably way more excited than a normal person is for Helsinki. Helsinki has been on my bucket list for years!!!! We’re doing some bus tour highlight thing, sort of like we did for Russia. I’m a bit sad, we don’t have a private tour for Helsinki like we do for some of the other ports since Helsinki is the port I’ve been looking the most forward to, but at the same time, I’m totally grateful that I get to visit Helsinki. I’ll probably get Justin something in Helsinki, since it’s very much a “rock” city with bands like HIM, 69 Eyes, Nightwish, The Rasmus etc, though I have no idea what I’ll get him. I’d love to accidentally see one of my favorite musicians there and get a selfie… But that will probably never happen, and I’m pretty sure I’d end up in jail if I somehow found one of them and stalked them… [just kidding, I would never do that!] There is also totally a Starbucks in Helsinki, and I NEED to get a Helsinki and/or Finland mug for my collection. I also have totally had my outfit for Helsinki picked out since before I even got on the cruise. I HAVE A HELSINKI PROBLEM.

I hope the weather will be better in Helsinki. The weather was pretty miserable in Russia. It was very gray and very cold, I don’t think it got above the low 50s, and I really didn’t pack for cold weather because I wasn’t expecting cold weather. I have long pants and hoodies, but had I known how cold it was going to be, I think I would’ve packed boots and/or a fleece or something. I could barely stay outside, even on the balcony because it was so chilly in Russia. It was supposed to storm while we were there, but I don’t think it actually rained, or if it did, it wasn’t when I was awake.

For dinner tonight, it was a formal night. I had some sort of crawfish filled pastry for an appetizer, alongside some yogurt. Ever since the dining room staff has found out I was on medication that can wreck your stomach, they’ve been giving me yogurt with every meal, which is really nice of them. I also had my tea at the beginning of the meal, as opposed to the end of the meal because I was freezing. I’ve been very cold on the ship. My mom likes to keep the room really cold, which I don’t mind while I’m sleeping because the quilt on my bed is very warm, but during the day, it can be sort of cold and uncomfortable in the room, which is probably why I always wind up getting a hot chocolate, at some point in the afternoon.

The one nice thing about a small ship like the Pacific Princess is the staff really gets to know you and recognizes you because there are only something like 600 passengers, whereas a ship like Majestic Princess has over 4000 passengers. The bar tender on deck 9 always knows I want a large hot chocolate, and the bartender at the bar outside the dining room, always has my cranberry juice ready as soon as he sees me leaving the dining room. I really like the Pacific Princess. I went on the Grand Princess last year, when we went to Alaska, which is a much bigger ship than the Pacific Princess, and while the bigger ship was nice, I just like this ship so much better because it feels like I’m surrounded by friends, in a way, if that makes any sense.

Anyhow.. The crawfish filled pastry was actually good. Crawfish is really big in Texas, but I’ve never had it because it seems like so much work just to get a tiny bit of meat out of a crawfish, but I’m glad I finally got to try crawfish since all my friends in Texas rave about it.

While we were eating and leaving Russia, we passed all these deserted islands. There were abandoned buildings, rusty military ships, lighthouses, and they were completely devoid of life. My one regret is that I was eating dinner while we passed those, and I didn’t have a chance to photograph them. Abandoned places are like one of my obsessions. There are actually a lot of abandoned places in Russia. One of the most famous, of course, is Chernobyl, which happened in 1986, and left the city of Pripyat abandoned. I’ve googled pictures of the aftermath of that disaster, and the pictures of the abandoned city and it’s fascinating.

As a meal, I had gnocchi with tomato sauce. It was good. Gnocchi is like one of my favorite foods. For desert, I just had some chocolate marshmallow ice cream with whipped cream. Tomorrow is Italian night. 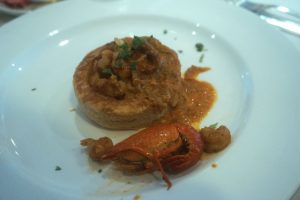 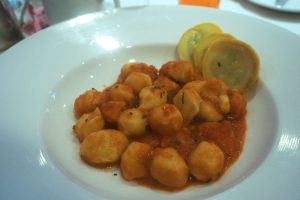 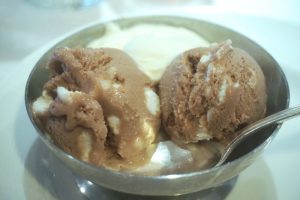 NOT MY DESSERT: [I think it had hazelnuts or pistachios or one of those nuts that would kill me] 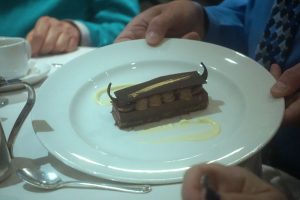 The people, who had been moved to our table, prior to our arrival at Russia were back tonight, and the man, who’s from Scotland, wore a kilt, which was awesome. Tom and Mike from Chicago were there too [I learned their names. I asked out waiters. That’s not cheating, is it? Now I need to learn the name of the new couple]. The couple, who had joined us for the first two nights have not been back to our table, and to be honest, I think they just transferred tables. I could tell that they didn’t mesh with our table too well. It happens. You never know who you’re going to sit with, and all personalities don’t click, I don’t take it personally. I don’t really talk much at meals anyways, unless I actually have something relevant to say to the conversation, which usually I don’t.

Our tour tomorrow is pretty early. I think we need to be ashore at like eight thirty in the morning, and our tour lasts until twelve, so about three hours. That should give us plenty of more time to find a Starbucks in Helsinki, and go shopping. I am so excited for Helsinki.

So til tomorrow in Helsinki… I’m out. 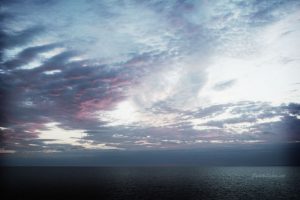 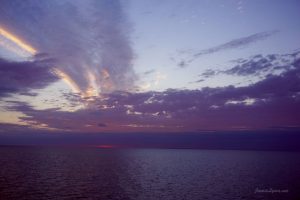 It's almost 11 pm... why not check out #reynisfjar

There's a #rainbow if you look carefully #skogafos

Today I learned that America knows nothing about c

It's almost 11 pm... why not check out #reynisfjar

There's a #rainbow if you look carefully #skogafos

Today I learned that America knows nothing about c