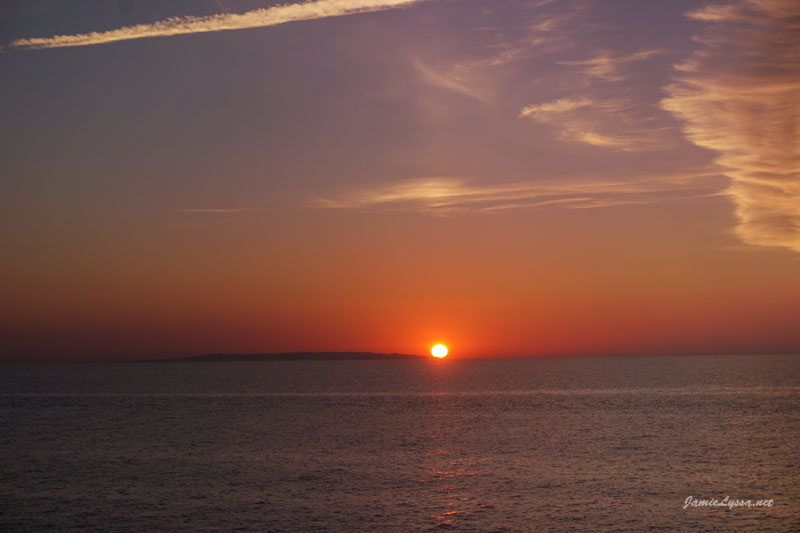 Today was a sea day, therefore there will be no historical information or port talks recorded in this blog entry. Nothing interesting happened today, that doesn’t mean it was a bad day, it just wasn’t as exciting as a port day would’ve been, but that’s okay, this cruise has seriously had back to back ports without a break between them [when I went to Iceland, we had 5 sea days in a row when we crossed the Atlantic!], so today’s sea day was a welcome day.

I slept very late today. I have no idea when I woke up. I’ll just say it’s between 9:30 and 10:30 am because with all the timezone changes from the ports [we changed the clocks back tonight] I literally don’t know what day it is or what time it’s supposed to be ever. Thank goodness my cell phone mostly automatically updates the day and time when we’re in port, or I’d be completely lost and confused, and probably stranded in some foreign country because I missed the ship because I thought it was a time that it really wasn’t.

I took a shower after waking up. It was a very long shower. After my shower, I finished the book I complained about yesterday. I just can’t be happy unless I finish books, unfinished books stress me out. Luckily I’m a fast reader, and I got through the second half of the book pretty fast. The second half wasn’t any better than the first half. After I finished that book, I started another book, that I liked much better, and I finished that book pretty quickly. Then I started a third book that I’m about halfway through. My total book count is now: 12 books.

The speed reading gene that I share with my father is such a blessing and a curse. It’s awesome to be able to get through books really fast and it was super useful in college, when I was an English major, and had tons of novels and such to read for class, but alas it’s also a curse. There’s nothing worse than waiting a year [or more… looking at you Jim Butcher… when is Peace Talks going to come out? You’re torturing me here!] for the next book in a series, or just a new release by an author you’re fond of [such as Elin Hilderbrand and her Nantucket themed novels that come out every summer or anything by Kristin Hannah], only to have the book come out, finish it in a few hours, and then have to wait another year for the next installation of a series or a new book.

Around noon or so, my mother and I decided to go get lunch at the buffet and visit Marius. There was really nothing either of us liked at the buffet today. I’m actually thinking of on the suggestion box for the Pacific Princess to recommend that they serve chicken tenders/nuggets at every buffet [except breakfast, of course] because if I’m an adult and I don’t like a lot of the food, I can’t imagine what the few young children on the boat are eating, when they go the buffet. Granted, they probably would just laugh at my suggestion because this boat isn’t exactly the best for young children [nothing against the Pacific Princess, it just seems to attract a much older crowd than say the Grand Princess, which we took to Alaska, last year, and there’s just not much for children to do on this boat. Personally, I prefer the older crowd and the slower vibe on this ship because my idea of having a good time is reading as opposed to dancing in a club and/or going to karaoke, though I do like watching people make drunken asses of themselves during karaoke], but it’s worth a try. We sat outside for a few minutes, but there were bees everywhere, and I am terrified of bees, so I literally ran inside, and by then mom and I decided we just weren’t feeling anything in the buffet today, so we decided to go down to the dining room to eat lunch.

After lunch, we came back to the room. We must’ve watched the live-action Beauty and the Beast, at least four or five times because there was nothing else on the TV. I played Fire Emblem Awakening on my 3ds until my batteries started to die [the blinking red light of death], and then I opened my kindle and read until dinner.

At one point, I went down to the medical center to get my bandages changed.

Trigger for Boob Talk, though it’s not as gory or anything, but still, if you don’t want to read about boobs, just skip this paragraph.

[And I’m sure people wonder why I freely blog about my breast reduction issues I’ve had on this cruise in public blog entries… Let me explain. I was very honest when I got the surgery and the after effects of the surgery in earlier entries prior to the cruise. I want to continue to be honest. I know when I decided to get my breast reduction, or I thought something abnormal was happening after the surgery, I would visit Dr. Google, as well as the reduction reddit, and see if anyone had something similar happen to them that I could read and reassure myself that I was going to be okay. I want to provide that same information for other people, in case they decide to go through with a breast reduction, and something similar happens to them happened to me, and if I can make even a single person experience some sort of relief or even just inform them and let them know that they’re not alone, it will make me happy.]

ANYWAYS, I was supposed to get re-bandaged yesterday, but the excursion we went on in Latvia started later than usual excursions, and ended later than I thought, so by the time we got back on the ship, the public hours at the medical center were over, and I didn’t think re bandaging my boobs would be considered a medical emergency and saw no reason to try to get it done and bother anyone.

There’s really nothing to report. The infection [aka green booger like drainage] is gone. I still have some open areas that are closing and oozing liquid [mostly blood and fat oil] and a hole by my right nipple, but other than that, I’m fine. The infection is gone, YAY, it will just take awhile for my boobs to be completely healed, and well that’s just the way it is. It also doesn’t hurt as much as it used to when the areas get cleaned, so I think that’s a good sign that I’m healing well.

Bee and I talked about books the entire time she was changing my bandages. She likes some of the same books I’ve really enjoyed, and I started telling her other books I thought she might enjoy, and told her when I see them for my last bandage change before I fly home to Texas [which would be the day we’re in Amsterdam], I’d make her a list of books I really liked that I thought she might like too.

It was the last formal night of the cruise. There’s really not much else to say about that. I didn’t like any of the “formal” food and instead had a tomato/mozzarella/basil salad as an appetizer because I have a problem [it’s the third or fourth day in a row that I’ve enjoyed that appetizer] and chicken tenders/fingers with mashed potatoes as a meal because I eat like a seven year old. I guess I’m sort of a picky eater? Growing up with a severe food allergy [tree nuts] probably made me a picky eater. I do like some “unique” food… like I love sushi, I love most Indian Food, Thai food is delicious… But there’s so much I don’t like to eat, and a lot of the food on cruises is a bit too strange for me. For desert I had this desert called “floating islands.” It was basically meringue in a vanilla sauce with streaks of a caramel? It normally comes with nuts on it, but Marius was nice enough to get the chef to make me one without nuts on it. It was delicious. It tasted basically like I was eating fluffy marshmallows.  Then after dinner, Josh was back at the bar, so I got my usual cranberry juice and went back to the room, and we started watching Beauty and the Beast for like the sixth time. 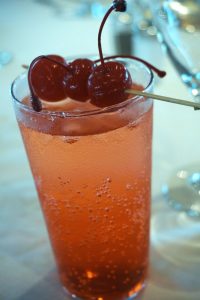 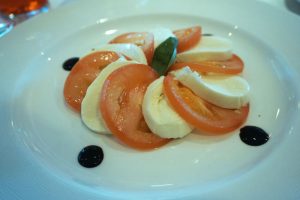 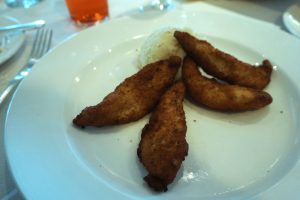 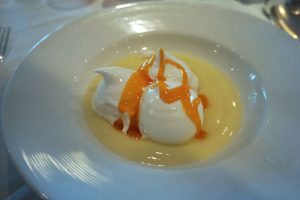 Not My Desert: [it had nuts of death on it, but it was the featured desert of the formal night] 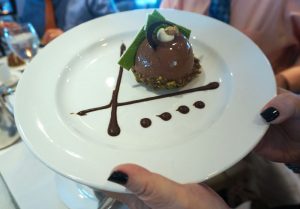 Tomorrow we head through the Kiel Canal, which is technically in Germany. I think we arrive there around four am, but I will not be awake for our arrival, and start going through it around six am, which I will also not be awake for. It’s similar to the Panama Canal, just in Europe obviously. Tomorrow morning, we’ll be waking up around nine or so, and we promised Marius that we would go to the suite breakfast that they have in the restaurant in the morning. Then in the afternoon, we’re having lunch with Tom and Mike on our balcony as we sail through the Kiel Canal. I think we’re just ordering room service though, nothing too fancy. They want to take pictures of our suite, and pass it off as their suite to some of their friends.

Really, that’s it. Nothing happened today. I ate food, I read, I played video-games, and I sang along with Beauty and the Beast several times.  This was probably the shortest entry that I’ve written in this blog since going on the cruise. But like I said in the title… Nothing Interesting Happened This Day in Cruise History… Though I am sad that there are only two more dinners, one more port [unless the Kiel Canal counts as a port? Or would it be a sea day since we’re not actually leaving our ship?], and three more sleeps before I fly back to Texas. 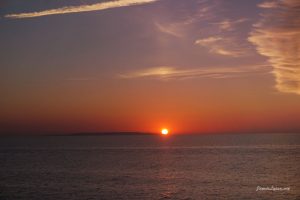