I didn’t sleep very well last night. I would say part of is was the anxiety of flying back to Texas from Heathrow, by myself, and going through customs and everything, the other half was definitely the North Sea. The ride last night was so rough, and since I sleep on a couch bed that’s rather low to the ground I felt all the vibrations and bumps and everything. Eventually the sea got smoother, but by then it was like three or four in the morning, and I woke up at six, and took one last look at the White Cliffs of Dover. 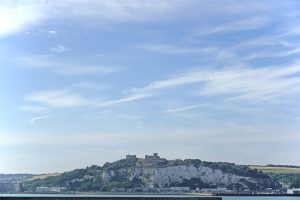 Once I woke up, I stuffed my pajamas in the Starbucks bag that had previously held my Amsterdam mug and Gerhard’s Netherlands mug, and went up to grab some breakfast. The buffet was really crowded. I grabbed some food [fake eggs, potatoes, and a lemon Danish] and ate it all in the room. One man, at the buffet, had a plate full of beans as his breakfast, and well I feel bad for whoever is sitting next to him on his flight home.

Around 7:15, I went into the Cabaret Lounge to wait for my bus to Heathrow. At 7:30, we left the lounge, and gathered our luggage [where I stealthily stuffed my pajamas into a section of my suitcase], and then we drove to Heathrow Airport, which was about two hours away from Dover.

Heathrow was a mess. Ugh. You can only self-check your luggage in, it’s all automated, there were no actual people like there are at other airports, and really that would be fine and dandy if it wasn’t for the fact that my suitcase was way over my weight limit from surgery, and I had to lift that thing up not just once, but twice because the first time I put it on the conveyor belt, the machine malfunctioned and that had to reset it. My first bag was free, I just had to pay pounds for the second, and even that with the exchange rate was way cheaper than United’s checked baggage is.

Once my luggage was checked [and I found a water closet], I went down to Terminal 5. British Airways is weird. It was like eleven am, and they weren’t going to reveal my gate number until one pm, so until then I just stayed in the A Gate section, which is basically just filled with tons of duty-free shopping liquor stores, but alas I spotted at Starbucks in the midst of all the booze. So of course, I had to go to Starbucks… I mean a tourist trap like an international airport would surely have a mug, right?

They did. I decided on the England mug because I’ve technically been to England [Dover is in England] as opposed to the London mug since I’ve never actually been to London before [#tripgoals]. I also got a caramel frap. They taste the same in England to. And I was sad to see that nether Helsinki, Amsterdam, nor England had any frap flavors that were mutually exclusive to their country, sort of like McDonald’s, which has different menus in different countries. I mean England could’ve totally cashed in on the unique frapachino crowd… Like maybe an Earl Gray frap or a Lavender Frap or something would’ve been very England… And Helsinki could’ve had a Death by Death Metal Chocolate Frap or something… Maybe Amsterdam could’ve had a cannabis flavored frap? I mean if you can buy cannabis flavored lollipops in souvenir stores, I don’t see why you can’t cash in on that in an Amsterdam based Starbucks.

I still had time to kill, so I just found a seat next to a little table and read a book. I finished the book at exactly 1 pm, when my gate was revealed, and of course I wasn’t in A terminal, I was in B terminal. Heathrow is sort of like the Atlanta airport, in a way, you need to catch a subway [which was on -2 floor, I would like to add, and the first floor is 0, so much cooler than the United States] to get to the B and C terminals, so I caught a subway, and managed to make it to my gate relatively unharmed.

The terminals are tiny in British Airways, which explains why everyone is packed like cattle in the A terminal. It probably helps ease traffic and congestion throughout the airport. But still it was sort of stressful when I didn’t know to expect it.

When it was time to board the plane, our plane wasn’t there, another plane was. We had to walk onto the Tarmac and take a bus to a completely different terminal, where our plane was. So, I can now say I’ve walked on the Tarmac at Heathrow Airport. Once we got on our plane, the timing til takeoff was relatively uneventful. I sat in an aisle seat. The woman next to me had really BAD BO, which made the next ten hours very pleasant. [I should add that she seemed like a very nice woman, and that’s nothing against her, I know in some cultures and places, people don’t wear deodorant, and that’s fine, I just am very sensitive to smells].

It’s a good thing we got out when we did from Heathrow because a few hours later there was some sort of IT issue, and dozens of flights from Terminal 5 were delayed and canceled and that affected something like 10,000 passengers and they were stranded at the airport overnight. A fire alarm was also triggered there, which delayed other airlines’ flights, so I’m really lucky I got out when I did. I think I would’ve had the biggest panic attack of my life had I been stranded in Heathrow Airport overnight.

The flight itself was a flight. I don’t sleep on flights. I spent the first four or so hours [out of ten] reading two more books [Total books read: 18 books, must update my goodreads challenge], then I played Fire Emblem Awakening for a few hours, then I grew bored with that, and wound up watching “Love Simon” on the plane, which was a cute movie. I can’t really compare it to the book because I read the book about three years ago, and I remember the book and what happened in the book, for the most part, but I don’t recall specific details which are adequate enough to compare and contrast the book versus the movie well.

There were two meals on the flight. I love plane food, I take after my dad, I also love most cafeteria food like he does. Lunch was a pasta with tomato sauce and melted cheese, a chunk of delicious white cheddar cheese with crackers, a roll with butter, quinoa salad [airlines really seem to like their quinoa] with tomatoes and cucumbers, this orange chocolate pudding, which tasted a lot better than I thought it would. Our meal before landing [I guess technically it could be dinner] was a chicken salad sandwich and a shortbread cookie with chocolate drizzle. They also did serve tea after every meal. It wasn’t high tea with its sandwiches and scones, but it was British tea, and I liked it.

Compared to United’s Economy [or coach] class, British Airways was better. The seats were wider and more comfortable, and the stewardesses were friendlier and more attentive. But United had the better selection of in-flight entertainment.

We landed in Texas and as soon as we landed I could feel the Texas humidity. Going through customs was uneventful, which is good. For a US Citizen, when the airport isn’t very crowded, it took about five minutes. You scan your passport, you answer the customs questions on a computer screen, they print up a piece of paper, you hand the paper to the customs agent, who barely looks at it [probably because I am a US citizen], looks at your passport, and lets you through. They didn’t even look at the customs form I painstakingly filled in on the plane. Baggage claim for international flights is separate from normal baggage claim, so I had to get my luggage off the carousel, but luckily a nice man helped me get my heavier suitcase, so I didn’t have to lift that myself.

Then I went out and saw Justin [and handed him all my luggage] and gave him a huge hug. We went to the parking garage, and he even had my favorite Sonic drink [sprite with cherry] waiting for me. We drove home through the familiar Texas streets, and I got to see the kitties. Our AC was struggling to work, but the house was around 80s degrees, and it’s been much worse before [and the AC guy is supposed to come tomorrow] so it was sort of bearable [though barely] and I can’t wait to sleep in my own bed tonight.

I gave Justin his souvenirs [which included a pair of cannabis print slippers from Amsterdam], and he liked them all. I have tons of postcards to write [and will need to go to the post office to get international stamps for my friends abroad] and it’s nice to be home [though I prefer the temperatures of the Baltic to the temperatures of Texas].

The cruise was awesome, and I was so excited to see so many countries that I’ve always wanted to travel to. I had a good time [even despite my health issues], met some cool people, and relaxed a lot. It’s always bittersweet to be home, but at least I know for sure that my next adventure is right around the corner in November, when we go to Guadalupe Mountain, Big Bend, and Carlsbad Caverns National Parks.