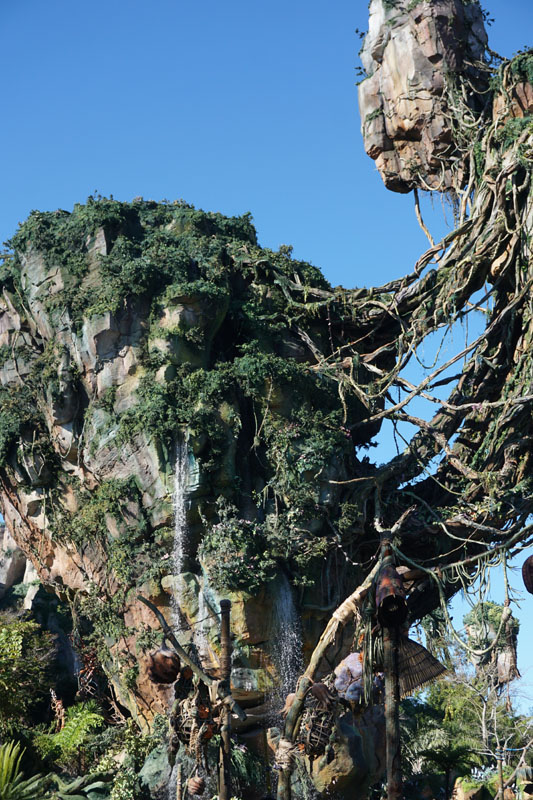 [reblog of a trip from last year!]

I hated the movie Avatar.

I saw it on Valentine’s Day, with a friend, and we saw it in IMAX, and I actually had to leave before the movie ended because the movie was making me sick and giving me a migraine.

I did eventually finish the movie, and I still hated it.

That being said,I still went to Pandora with an open-mind, and the pictures all made it look so pretty.

The line for Flight of Passage was so long that while walking to Pandora, we actually had to be rerouted to another entrance. The standby wait for FoP was three-hundred something minutes.

The line for Na’Vi River Journey wasn’t really much better… I think it was something like 120 minutes.

I do give Pandora this, it really is a visually splendid place. 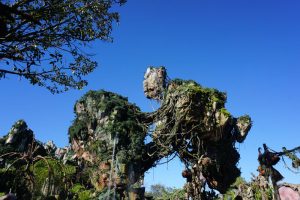 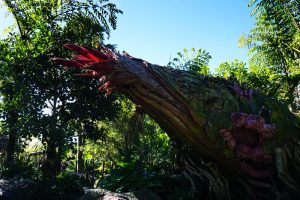 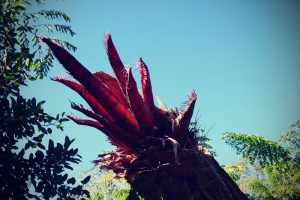 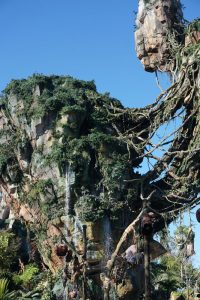 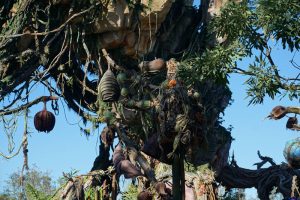 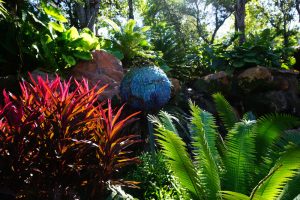 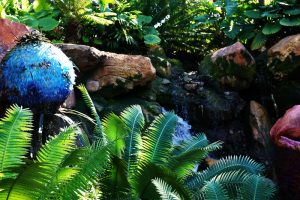 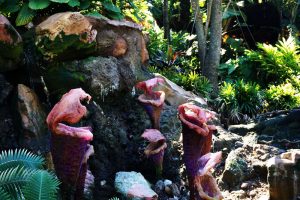 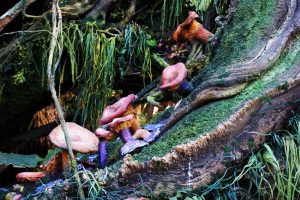 Now what to say about Na’Vi River Journey? I wish the 120 minutes I wasted waiting on that line could be given back to me. Though, at one point, a couple in front of gave up on waiting, and the cast member, who was working the line, jokingly said to us “That’s three less minutes off your wait,” which I suppose would make it 117 minutes, we waited. 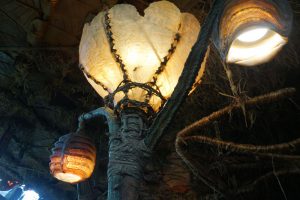 The queue itself was visually stunning, and for some reason I took like 100 pictures of this lamp, so I must’ve really liked this lamp. 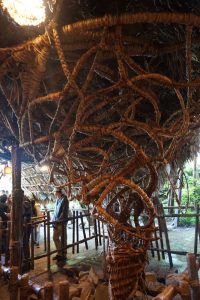 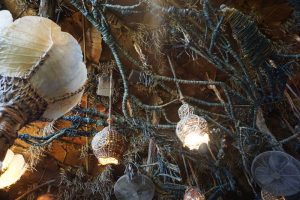 The sort of represented some sort of time-line? I don’t quite remember the description of it aside from it being some sort of time-net, which totally sounds like something that belongs on Doctor Who. Though I don’t think the fan was invented on Pandora, nor do I think the Na’vi would have had any interest in a ceiling fan.

The wait said 120 minutes, but I swear it was much longer. We even missed our KS fast pass and I couldn’t rebook it because there were none left, so I guess it was a good thing that we had ridden it earlier.

I played a lot of gameboy on that line. My fire emblem awakening team was seriously almost where I wanted them to be by the time we finished that ride.

Eventually we got on the ride. 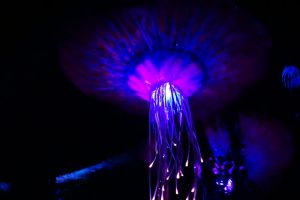 This is my ONLY picture from the ride that actually came out.

My verdict: DO NOT WAIT LONGER THAN MAYBE 30 MINUTES FOR THIS RIDE, maybe even fifteen.

It just was not worth the wait. It’s basically a Na’Vi Pirates of the Caribbean, only it’s starring the Shaman of Songs instead of Johnny Depp. The coolest part was probably the Shaman of Songs. But the ride itself was only maybe 3 minutes long, and while it’s sort of visually appealing, you can have the same visual appeal, if you just walk in Pandora, at night. The ride just wasn’t anything special. It was super short, and I waited over two hours for it, and it just was not worth it to me. I just had no interest in the ride. There was no story, and by the time I got on the ride, I was just ****ed I had waited for two hours, and the ride was nothing special, at all. I didn’t feel emotionally invested in it, I wasn’t impressed with anything.

And that has NOTHING to do with my lack of love for Avatar because I loved Flight of Passage. Def choose a FoP fastpass over Na’Vi River Journey, that’s two hours you could be spending on good rides, instead of waiting for a boat ride that looks like it belongs on a black light poster in a college dorm room.

That’s just my opinion though, I’m not trying to offend anyone, just giving my two-cents. After all I absolutely love Journey into Imagination, and I’m sure people feel the way about that ride that I did about Na’Vi River Journey.

After the boat ride of disappointment, I was thirsty [maybe from waiting in line for over two hours]. Justin and I decided to try some of the Pandora themed drinks from Pongu Pongu Lounge 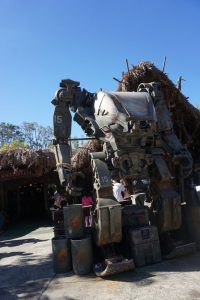 I got the Night Blossom and Justin got the Mo’Ara Margarita. 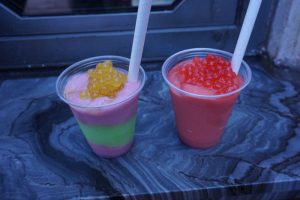 First of all, I consider myself to be a Boba connoisseur, and I am sad to say that this boba was unlike any other boba and not in a good way. It basically popped in your mouth, sort of like gusher’s fruit snacks, if anyone remembers those, and I really like chewy boba.

While sipping my wannabe unicorn frappuccino, I got this notification on my phone: 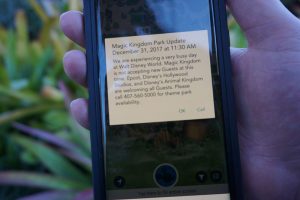 Well, I guess it was good thing I wasn’t planning on going there. 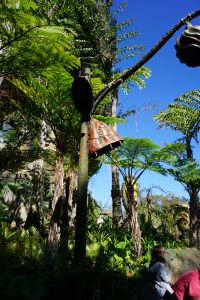 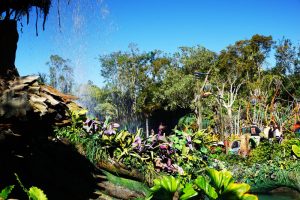 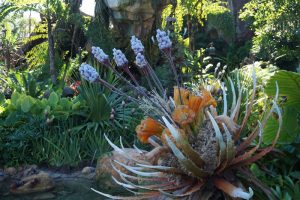 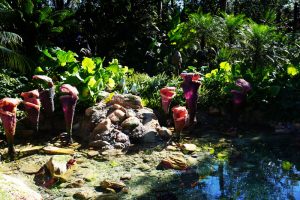 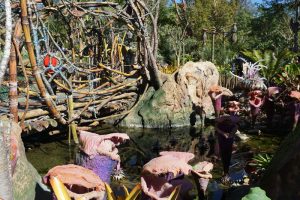 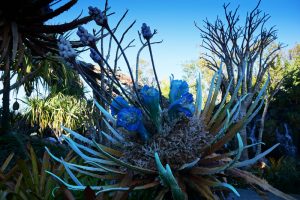 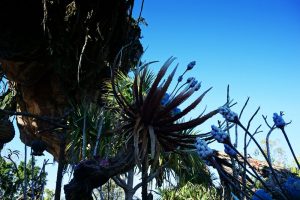