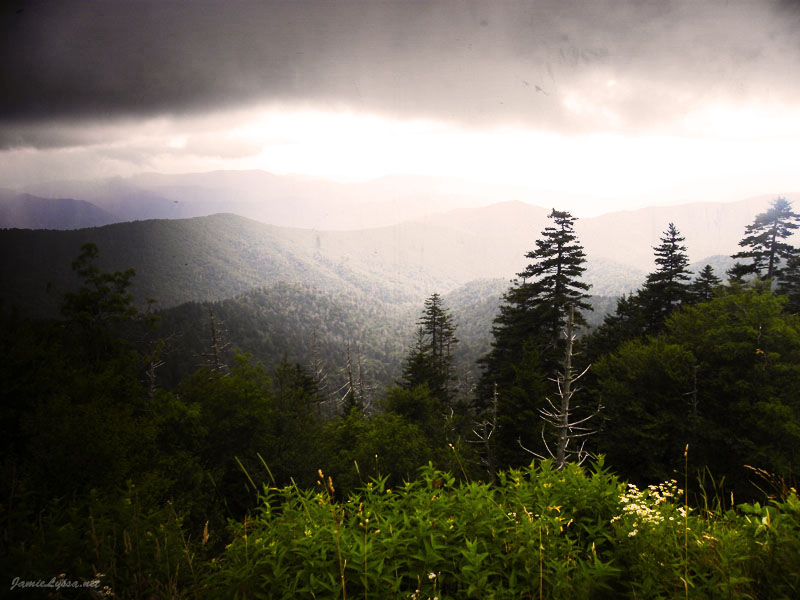 First of all, sorry for the abundance of updates in your inboxes if you subscribe to my blog. I found a way to connect my old travel blog to my current website and when it transferred all the old entries, it also notified any followers of this blog, if there are any followers. Again, sorry!

We have a Thanksgiving break in two weeks. Normally, we usually just stay around Texas, and celebrate and eat too much with our families, but this year we’re doing something different. We’re camping, and visiting three national Parks: Big Bend National Park, Guadalupe Mountains National Park, and Carlsbad Cavern National Park.

With those trips looming, I thought it’d be fun to do a throwback to the first two national parks that Justin and I ever visited: Great Smoky Mountain National Park and Shenandoah National Park back in July 2012.

This entry will focus on Great Smoky Mountains.

The Great Smoky Mountains are a mountain range residing along the Tennessee and North Carolina border. We entered the park via Gatlinburg, Tennessee, which is basically what a city would look like if Las Vegas and the Jersey Shore had a baby, and it’s the home to monstrosities like this: 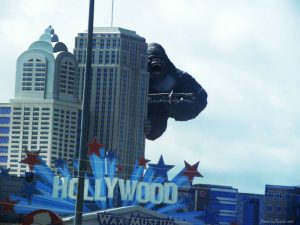 Great Smoky Mountain National Park became a national park in 1926 when John D. Rockefeller Jr contributed 5 million, the US government contributed 2 million, and private citizens from Tennessee and North Carolina pitched into to assemble the land for the park, piece by piece. The park was officially established in June 1934 by the United States Congress, and officially dedicated by President Franklin D. Roosevelt in 1940.

The Great Smoky Mountains got their name from the blue mist that always seems to hover around peaks and valleys. The blue mist or smoke is created when vapor is released from the area’s vegetation, the molecules that make up the gas scatter blue light from the sky. You can only find this bluish mist in the Smokies.

First of all, I’m sorry to say most of my photos from our visit to the Smokies are crap. I was just starting to get into photography at the time, and my camera was just a point and shoot. A lot of the photos are overexposed, and I’m embarrassed by them. But regardless, I wanted this trip documented for the website.

I wish I remember more about this trip, but it was so long ago. So I’ll do the best I can to remember. It was Day four of our road trip from NJ to Texas, when I was moving to Texas. Unfortunately, we didn’t really have a lot of time to spend in the park because Justin had just gotten a new job, and needed to speed back to Houston for orientation, so it was a very quick trip through the Smokies.

Day Four started innocently enough, we found our way to Great Smoky Mountain National Park easily enough although we were rather confused because it was so vast compared to Shenandoah. We parked at some random station, noting the temperature was about 104 degrees and there way no way in hell that we were hiking as we originally had intended do, so instead we ended up frolicking around an easy nature trail that led to a waterfall, which was good because I promised Justin that he would see a waterfall, and I intended to keep that promise, so he finally saw a waterfall. Granted, it wasn’t one of the more well-known waterfalls at Smokies, but it was a waterfall nonetheless 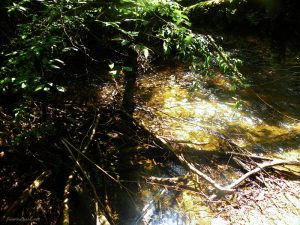 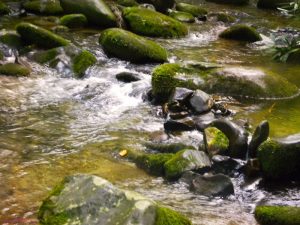 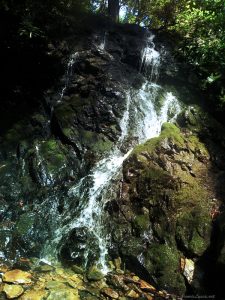 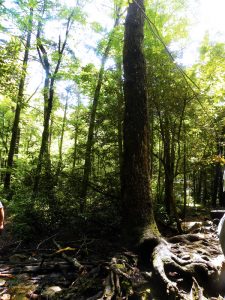 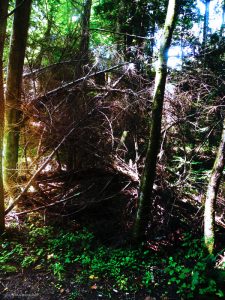 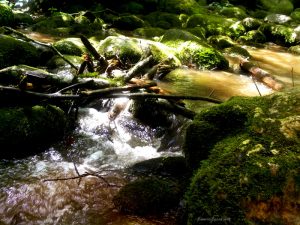 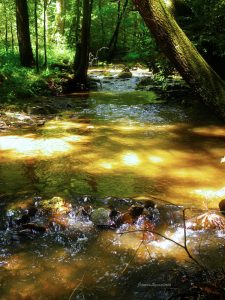 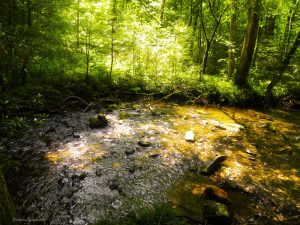 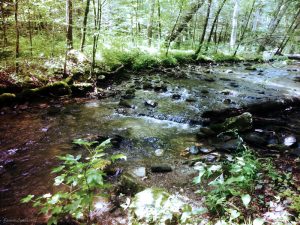 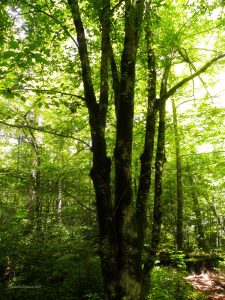 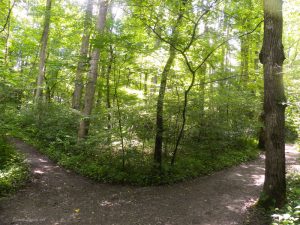 Needless to say, after that, we had no idea where to go and my GPS just apparently didn’t feel like working, nor did it was specific destinations within the Mountain… Maybe it got heat stroke. So we found a visitor center and asked them how we see The Great Smoky Mountains, and she was like “You’re on the Great Smoky Mountains already”, so we asked her how we could get to the highest point and she highlighted a route for us on a map.

So we started driving up this scary windy and curvy road that freaking scared me to death, thank god Justin seems to find those sorts of things exciting. The entire wood was surrounded by forest, and there was no cell service whatsoever, on the entire mountain, so if something happened, you were sort of fucked.

We stopped off on the side of the road, a lot. There were tons of little trails and look-offs, and we paused and took photos. There were lots of streams, tons of places to look at the mountain at different elevations. It was very pretty, and the mountains itself were incredible to look at, it really looks like there is a blue haze coming off them as you climb up them. 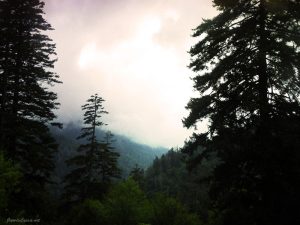 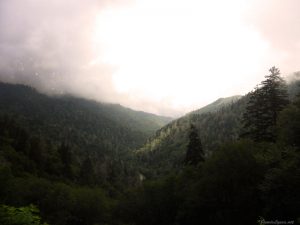 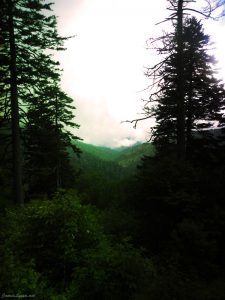 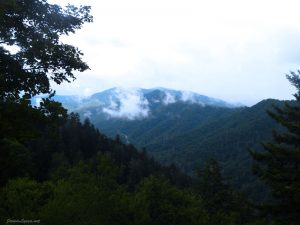 At one point, I think we were halfway up the mountain, we found the area, where you could take a photo, at the Carolina/Tennessee State line, and of course we had to do that: 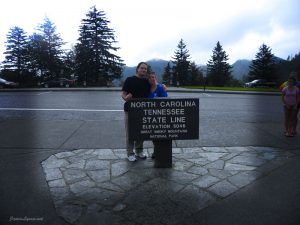 The weather was gorgeous and sunny- as we climbed up, but the higher we got, the stranger the weather got, it would rain, it would get cloudy. 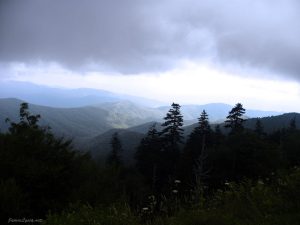 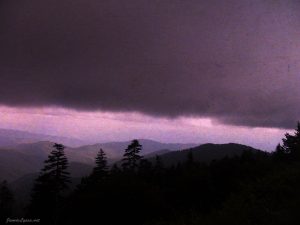 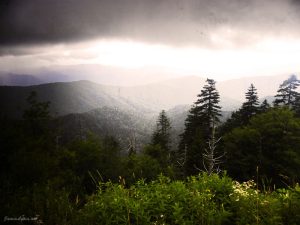 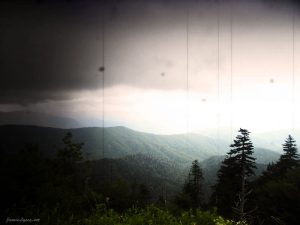 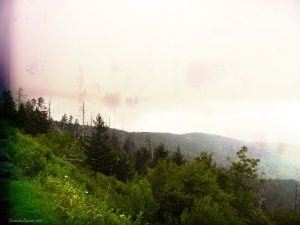 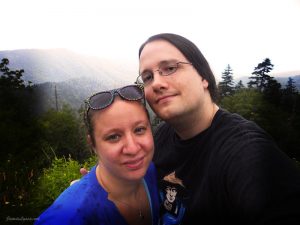 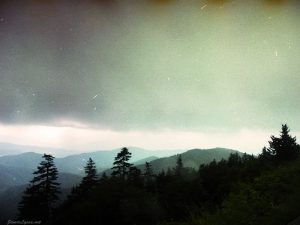 By the time we reached the highest elevation of the mountain- it started storming. It was a blinding thunderstorm, with hail. We got drenched, and the rain was so hard that you couldn’t even see two feet in front of you- and I was petrified of it and thought we would die, and would barely watch when Justin finally drove down the mountain.

The traffic going down the mountain was awful. The cars were basically stop and go down a long and winding road, and then once we got back into Pigeon Forge, TN, which is basically like the Jersey Shore, traffic was awful.

The ride to Nashville, which was our destination for that night, sucked because we were soaking wet, and for some reason the traffic was just awful, and it was a three hour ride from where we were, but eventually we got there.

I wish I remembered more. I wish I had the appreciation for nature and national parks now back then. I enjoyed seeing the Smokies, and it was definitely an adventure there, but I feel like we didn’t really get to appreciate the Smokies because we had such a rushed trip there. I feel like I made the same mistakes on our honeymoon, when I planned it, I had great intentions with all the national parks that we were seeing, but I didn’t really give us enough time to experience them.

I’ve learned from my mistakes though and when we do have our upcoming road trips, I hope I’ve allotted enough time to experience them, even a little bit, and we will be back to the Smokies one day 😉