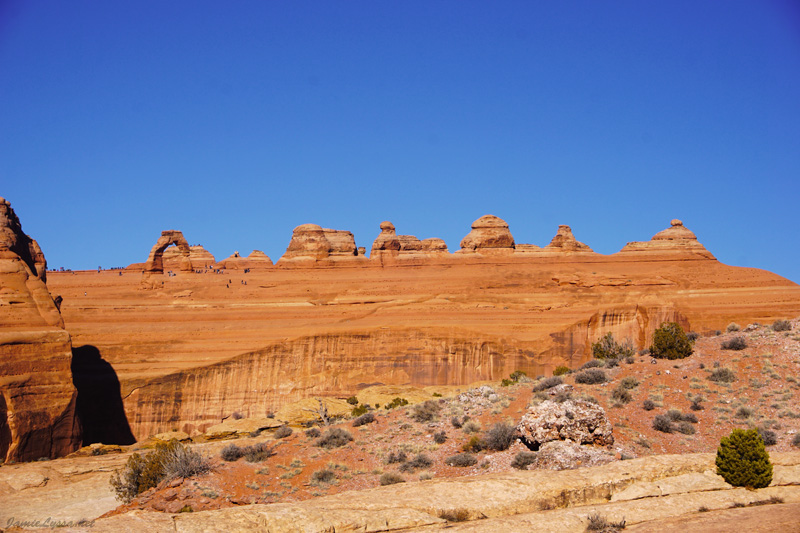 I would like to preface this entry by saying that I wasn’t a fan of Arches, at all. It seemed like the Disney World of Utah National Parks to me. But I will also say that Arches really didn’t get a fair chance because of inclement weather and government shutdown, but more on that later.

We left our hotel early in the morning so that we could get to Arches. We stopped at a Starbucks on the way so I could get my Utah mug.  It was about a two hour drive from the hotel we had been forced to stay in the night before. We probably got to Arches around noon or so. The first thing we did was take our sign selfies. 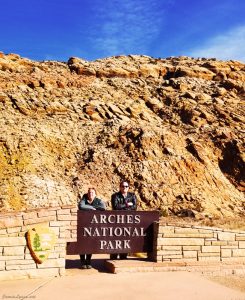 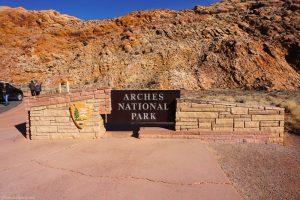 Arches had this little stand in front of the sign photo, where you could place your phone or camera, set a self timer, and it would take a selfie for you, which totally pans into my Disney of Utah thoughts.

The first thing we did, of course, was go to the Visitor’s Center since Arches was one of the Utah National Parks that was paid for by the state to stay open until New Year’s Eve. We wanted our stamps, our passport stickers, our magnets, and our postcards. 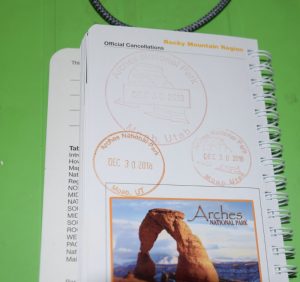 The next thing we did was talk to a Park Ranger for recommendations on what to hike and and see. When we got there the Park Ranger gave us some sad news, he told us that it was going to snow the next day. He said that the park didn’t have the staff to plow the road if it did snow thanks to the shutdown. He said it could be anywhere from 1 inch to 4 inches to 1 foot, or we could have nothing. He said the state parks would be open since they’re obviously paid for by the state [foreshadowing!], and recommended we check out Dead Horse Point, if the park was closed. After that he recommended a few hikes for us, and said we should probably check out the park today just in case there was a white out.

Arches National Park was originally named a national monument on April 12th, 1929, and was redesignated as national park on November 12th, 1971. It got over 1.8 million visitors in 2018, and is one of the most popular national parks in Utah. The park consists of 76,679 acres of high desert [you drive up a steep and windy road to get to the park from the visitor center] on the Colorado Plateau. The highest elevation in the park is 5,653 feet at Elephant Butte, and the lowest elevation is 4,085 feet at the visitor’s center. The park gets less than 10 inches of rain annually. Arches was made into a monument by President Herbert Hoover to protect the arches, spires, balanced rocks and other formations for their scientific and educational value. It got its name in 1925 via the superintendent of Park Services for southwestern monuments, Frank Pinkley, after he visited the Windows section in 1925.

In later 1938, Franklin D. Roosevelt signed a proclamation that enlarged Arches to protect additional scenic features and permit development of facilities to promote tourism. In 1960, Dwight Eisenhower, made a slight adjustment to FDR’s proclamation to accommodate a new road alignment. In early 1969, Lyndon B. Johnson signed a proclamation which enlarged Arches. Two years after that Richard Nixon signed legislation enacted by congress, which changed its status to a National Park though it did significantly reduce the total area enclosed.

There are more than 2,000 natural sandstone arches [hence its name] located in the park, including the Delicate Arch, which is on Utah’s license plates. Humans occupied Arches National park since the last ice age, which was 10,000 years ago. There are petroglphys from the Ute tribes, who came through the park in 1775,  but the first European-Americans to settle the area were the Mormon Elk Mountain Mission in 1855, but they soon abandoned the area. Later on, ranchers, farmers, and prospectors  settled the town of Moab in the 1880s, and the beauty of the Arches spread around, and the area become a tourist destination.

After we talked to the ranger, we started our trip up to Arches National Park, where we admired the scenery: 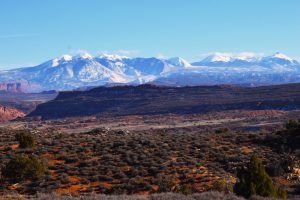 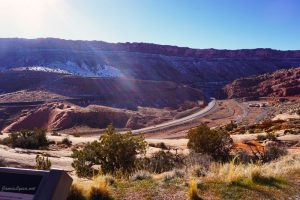 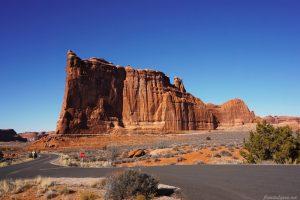 Our first notable stop was Balanced Rock. The total height of Balanced Rock is 128 feet, and the balanced rock itself rises 55 feet above the base. The rock is the largest of its kind in the park and weighs as much as 27 blue whales. Balance Rock used to have a smaller sibling named “Chip-Off-The-Old-Block”, but s/he collapsed in winter of 1975-1976, and eventually Balanced Rock will collapse too, as is the fate of most of the features in Arches National Park. 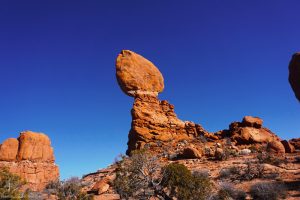 Balanced rock is right off the road, and there’s flat trail that’s pretty short and goes around the rock.

Next we stopped to see Delicate Arch, the most well-known arch at the park. We didn’t hike the trail to the base of Delicate Arch. Instead we hiked up to the Upper Delicate Arch Viewpoint, which wasn’t really a strenuous hike. It does climb about 141 feet, but it’s mostly stairs, and it’s about 0.7 miles long. There’s also a flat and wheelchair friendly viewpoint called the Lower Delicate Arch Viewpoint. The actual trail to Delicate Trail is extremely crowded and has an ascent of 480 feet with no shade, and is about 3 miles long, one way, and has some very narrow rock ledges to transverse. From the upper viewpoint, we could still see the arch, as well as all the people, who hike the Delicate Arch Trail. 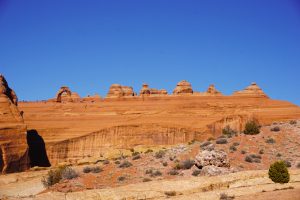 After that, we started driving to Devils Garden. Skyline Arch was on the side of the road, en route to Devils Garden. It’s a relatively short hike to get a closer view of Skyline Arch, it’s about 0.4 miles on a pretty short trail, but you can see it pretty well from the road. On a cold night in November 1940, a large chunk of rock fell out of the arch and doubled the size of the rock’s opening. 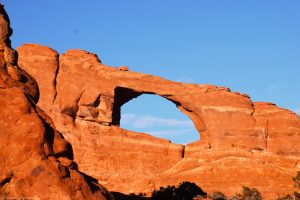 We got to Devils Garden afterwards with the intent to hike, but we had killed a lot of time at the brief stopovers we had made, and it was close to 4 o’clock when we got there. We started walking the trail towards Landscape Arch, but it was very icy, and would’ve taken us over an hour for one way, so two hours both ways, and we didn’t want to hike on ice in the dark, so we turned around, and decided we’d start that hike early in the morning.

Arches was super crowded, and there were so many obnoxious people purposely disobeying the rules of the park. There were people walking pets on trails, which isn’t allowed, children playing in areas that were marked “no trespassing” alongside trails, and it just made me sad. I think the people are the main reason I really wasn’t a huge fan of Arches. And as you’ll read I didn’t really get to experience Arches due to weather issues and the government shutdown, so I’ll also agree that I didn’t really get to evaluate it fairly. I do plan to go back to Arches one day [probably coinciding with a visit to the Colorado National Parks I haven’t visited], so I will be able to experience more of it in the future.

We left the park and started driving through Moab en route to our Bed & Breakfast for the next three days. Moab is a pretty cute town, it reminds me a lot of Estes Park in Colorado meets the Jersey Shore. There are a lot of cute little souvenir shops, tons of cafes and restaurants, and lots of unique hotels. I would say even in December, about 1/2 the town was open, the other 1/2 were places closed for the season, but I bet it’s a super popular tourist destination in summer based on how crowded winter was.

We were staying a bed&breakfast called The Red Moon Lodge. It was a very green bed & breakfast, the entire lodge is powered by solar power, in the popular season [as in not winter] they serve fully organic breakfasts and most of the food they serve they grow themselves. There’s a huge garden, as well as a chicken coop. There’s also a meditation room, a pond, a medicine wheel, and the stargazing was amazing. The beds were SUPER comfy too, they were tempurpedic beds, and I slept wonderfully. There was no TV, but we knew that, and we don’t really watch TV anyways unless we’re in a basic hotel, and I marathon the food network. I don’t even own a TV at home, if I want to watch something, I’ll Netflix or Hulu it. There was very fast WiFi. Since we were staying in winter, the room rates were discounted and there was no breakfast, but that was fine, there was a common area with a microwave and a toaster, which was fine for us. There was also 24/7 tea and organic coffee in the morning, but we actually didn’t try to coffee because we travel with Death Wish coffee and our percolator.

Our room was the Bear Room: 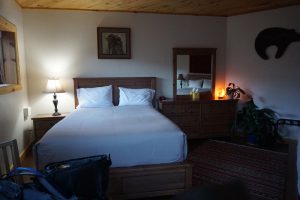 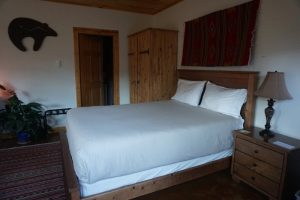 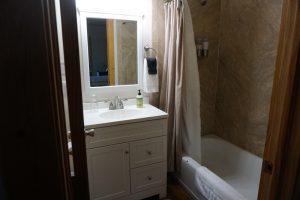 We both really liked The Red Moon Lodge, and hopefully one day we can come back, in season, and experience the organic breakfast.

We spent the first night in Moab just chilling. We had our video-games and internet, and eventually went to bed, hoping there would be no snow, or a dusting of snow, so we could see more of Arches.

Unfortunately mother nature had other ideas? 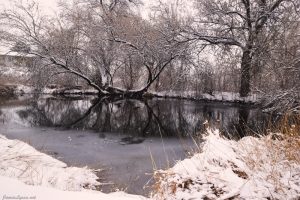 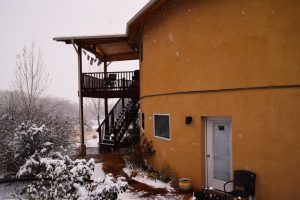 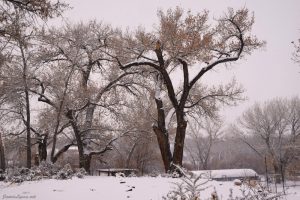 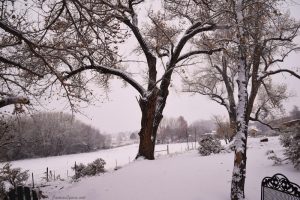 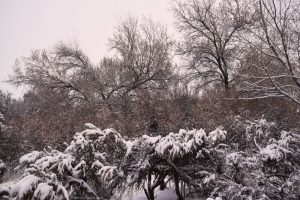 It was New Year’s Eve. The snow calmed down by early afternoon, and we did decide to see if Arches was open around mid-afternoon to see if the road somehow got plowed or the park was open. 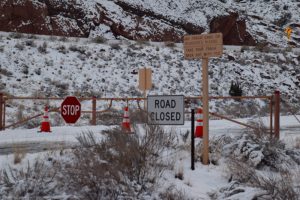 So we decided to stop at the Moab Diner in town for a New Year’s Eve dinner:

I had a delicious salad.

We spent the rest of New Year’s Eve in the room, playing on the internet, and just relaxing. It wasn’t the most interesting or exciting New Year’s we’ve ever had, but it was fine. We stayed up until midnight, wished each other a Happy News Years, and welcomed 2019. Then we went to bed. The next day we decided we’d check out Dead Horse Point since we were pretty sure that Arches would continue to be closed.