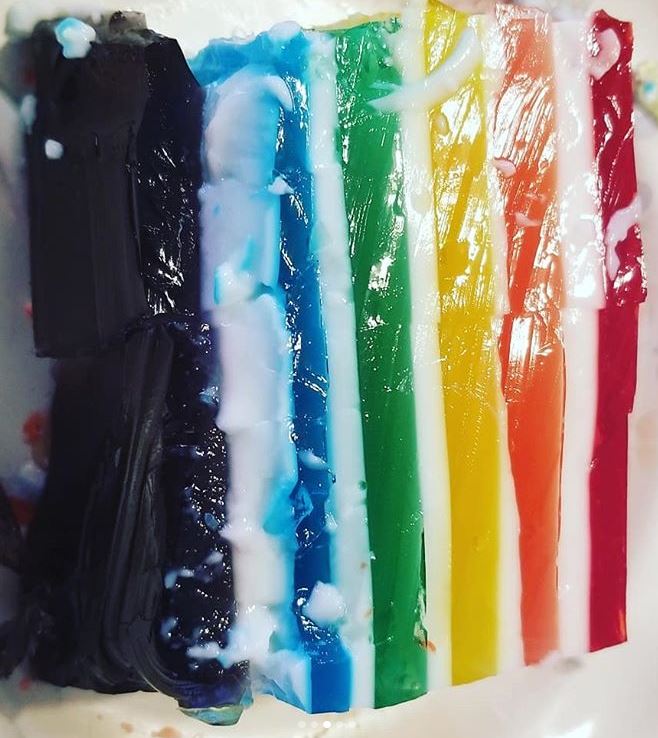 Disclaimer: I AM NOT A FOOD BLOGGER NOR DO I CONSIDER MYSELF A FOODIE, these pictures are from my Instagram account and this recipe is not mine originally. I don’t pretend to be a foodie or food blogger or professional food photographer, or anything like this, this is just my adventures in making rainbow jello.

I mean anything and everything rainbows, and for the longest time, I just always wanted to make rainbow jello. I’ve seen pictures for it all over the internet and pinterest, and making rainbow jello shots has always been a pastime of mine for every and any party… so why not try to make layered rainbow jello? Especially since as of recently, I’ve discovered a serious love for jello. And Memorial Day Weekend, the time of swimming pools, BBQs, and the official start of summer, seemed like the perfect time to try this experiment.

I got the recipe from here. That person is a real food blogger and their rainbow jello pictures turned out way better than mine. They get all the credit for the original recipe. This is just my take on the recipe, and I am not a food blogger, nor do I pretend to be, this is just something I tried to make that I wanted to share my experience with since so many of my friends seemed intrigued by it.

For the jell-o layers, I thought a modified ROY G BIV. I used  cherry for red, watermelon for orange [I really dislike orange jello and have since college, watermelon isn’t orange, but the pink is a lighter shade than red, so it worked], lemon for yellow [I think it would be delicious with pineapple jello, but Justin isn’t a pineapple fan], lime for green, berry blue for blue, and grape for purple. I used a mixture of Jell-o brand, store brand jell-o, and jolly rancher jell-o flavors, and it all turned out fine.

For the white layer, I used store-brand sweetened condensed milk. If you’re allergic to milk, I’ve heard coconut milk works too, but I’ve never tried it. I know soy milk doesn’t work though. For the white layer though, you definitely want something that’s flavored because unflavored gelatin tastes pretty nasty without a sweetener in it. Coconut milk would be pretty sweet, I know other people have used vanilla yogurt. So there are options if sweetened condensed milk isn’t your jam.

For the unflavored gelatin, I also used store-brand and it worked fine.

I’m not going to retype the recipe, if you want it, just go to that link, and give the person who posted it credit for it.

This recipe will take you all day though because you need to wait for each layer to set before you can add another layer. It took me about 5-6 hours. So keep that in mind. I wouldn’t say it was a hard recipe, at all, just a time-consuming one that you need patience for.

Some things I noticed:

My jell-o took about 30-40 minutes to properly set in my fridge before I could add the white layer to it. I found it helpful to make the jell-o when I poured a white layer, and by the time the white layer set in the fridge, my flavored jell-o was the perfect temperature to pour onto the white layer.

Also, the white layer needs to cool too, but you can’t let it sit out too long. I made the mistake of leaving it out in the kitchen too long, and even though it wasn’t in the fridge, it set. I had it in a measuring cup that wasn’t microwaveable, so I couldn’t microwave it to re-melt the gelatin, so I took it out with a spatula and spread it on the lemon layer like I would when I was frosting a cake. It worked, but the amount was uneven, and the watermelon jello that was going on top of that white later sort of sank into the white, you can see it in the pictures. I read that when that does happen, you can stir in some boiling water to remelt the gelatin, but I didn’t do that at the time. So be aware of your white layer.

These were the pictures after I finished making the jell-o: 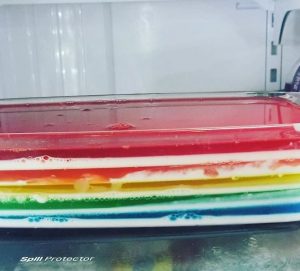 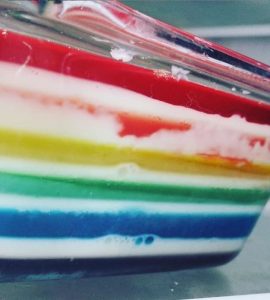 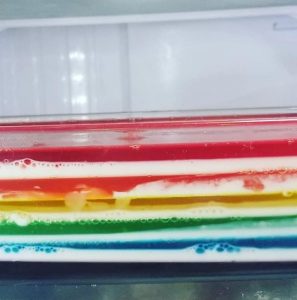 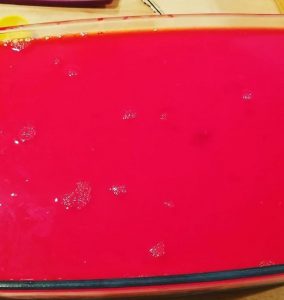 You can see the chunky white layer after the lemon layer.

Today, I bought the jell-o over to my mother-in-law’s house for a Memorial Day BBQ. The jello survived the 30ish minute car ride pretty well even in the Houston sun, but I put it in the fridge as soon as we got there, and left it there til desert. 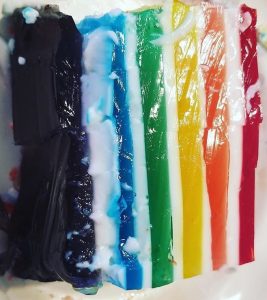 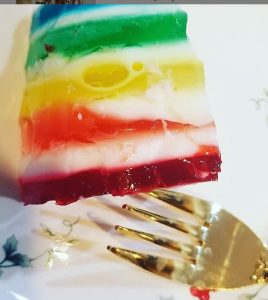 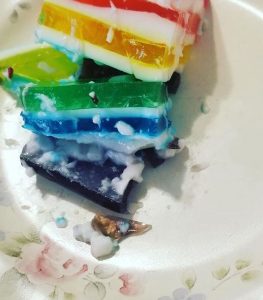 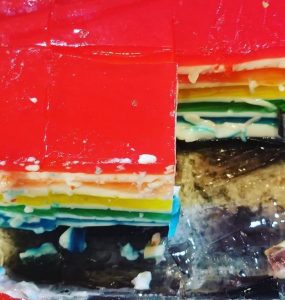 Overall, I would say the jello was a hit. I thought it tasted really good, especially if you eat two layers at once with the creamy layer between it.

It was a little softer than I would’ve thought it would have been and fell apart pretty easily on some of the cut pieces, but that didn’t affect the taste, at all. That also could’ve been from riding with it on my lap from where we live to my mother-in-law’s house and the hot Texas sun. I think next time, I might stir in a little bit more than recommended unflavored gelatin so it’s a bit harder and stays together better.

Note: This jello isn’t soft jello, nor is it meant to be soft like if you just make jello to make it. It’s meant to sort of be a jello cake that you cut with a knife, and can either eat with your fingers or stab with a fork.

Overall, everyone liked it. They all thought the rainbow pattern was cool, as well as visually appealing, and ate a little bit of it, though I am the only one who went back for seconds. But I really fucking love jello.

Would I make it again?

I don’t know if I’d make this whole tray of rainbow jello unless I had a party to go to or was throwing a party was multiple people attending, aside from the four of us who were there. I have TONS of leftovers, which will make it a staple in my lunches for school this week.

You can’t really make a smaller portion of this. You can make the layers skinnier, and use less jello, but you’re wasting jello then, but if you don’t mind that, it’s probably fine. You can also do less flavors/less layers, think a simple red/white/blue for the 4th of July or red/pink/white for Valetine’s Day or something. But if you want to make all of the colors, you’re probably better off either making smaller layers and throwing our your excess jello, or just saving this recipe for a huge party or something.

You can make this without the condensed milk layer: 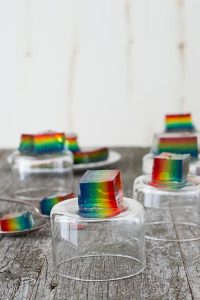 Like this person did. [Pic taken from their blog, just to show what it would look like]. It looks sort of Pink Floyd’s Dark Side of the Moon that way.

I am interested in making jello-shot shooters from it…

Like I’m thinking a cherry bomb shooter, a orange creamsicle shooter, and a pina colada shooter. If I ever get around to making those, I’ll be sure to post the recipes here.

I think those would be absolutely delicious.

In conclusion, I personally thought it was delicious [but again, I’m a jello addict], I would make it again given circumstances, and I feel like in making this for a first time, I learned from my mistakes and can correct them if I ever choose to make it again.

If you do choose to go on your own rainbow jello adventure, I hope you enjoy it, and as always, thanks for reading [the few of you who do, who aren’t spam robots].