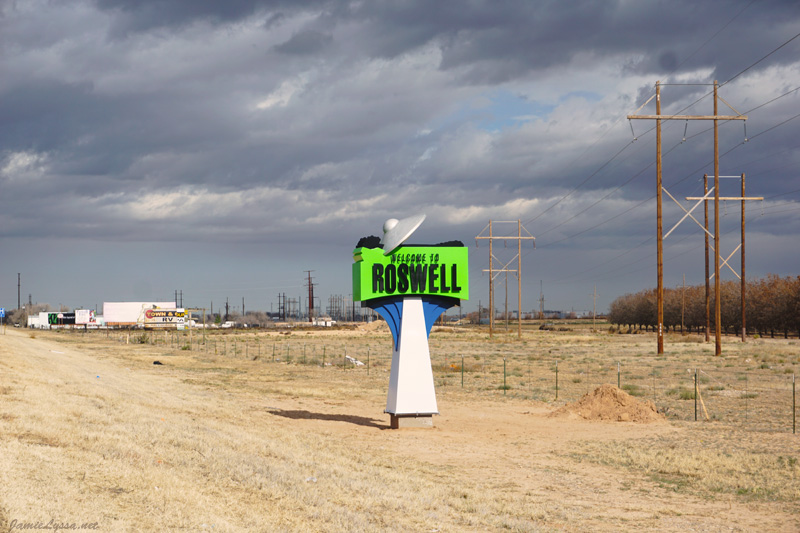 Let me preface this entry by saying, if you expect Roswell to really be cashing in on the whole alien thing, you’ll be absolutely disappointed with it. I was. I was expecting something REALLY CHEESY, like a cross between the New Jersey Shore Seaside Heights Boardwalk and Pigeon Forge, Tennessee. But alas, it WAS NOT even close. There is literally maybe one or two blocks with alien-themed things. There’s the UFO Museum and a few alien-themed souvenir shops. There’s also Alien 51 Museum, but we didn’t go there. It’s basically life-size diorama featuring aliens that you can insert yourself in for the purpose of selfies, but that wasn’t really our thing. And honestly, that’s it.

That being said, onto Day Two.

The wind was still really bad when we woke up on Tuesday morning. Let’s put it this way. When we got back from Carlsbad Caverns, there were three tents set up in the camping area. When I went to shower the next morning, all three tents were packed up and gone. I couldn’t even imagine camping in those winds. They must’ve been between 25 and 40 mph. We both showered after we woke up and then just ate some pop-tarts for breakfast. We probably left for Roswell around 9 am or so.

Roswell was about an hour’s drive away. Halfway through the drive, I realized I left my sharpie pens and postcard stamps in the cabin. Rather than turn back just to get them, we stopped at a Walgreens just outside of Roswell and bought some stamps and black sharpies [I can never have too many of those, especially during Christmas season] and it was fine.

There were some amusing roadside displays en route to Roswell, and Justin and I had fun with those: [after I convinced Justin that we weren’t the first people to park on the side of the road just to pose with roadside attractions] 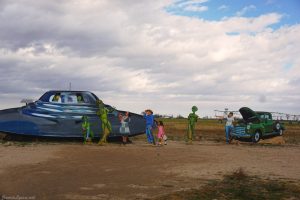 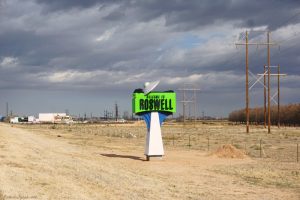 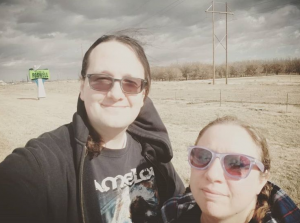 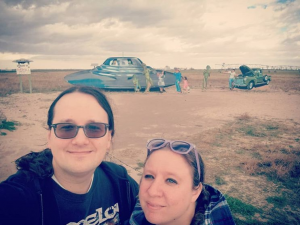 We drove straight the the UFO museum, which was on Main Street: 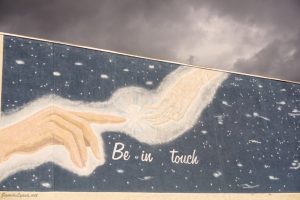 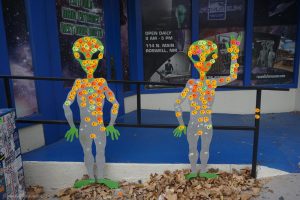 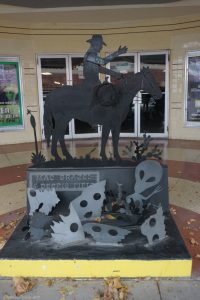 The museum has a five dollar admission. We both really enjoyed the museum. I didn’t know much about Roswell before going to the museum aside that there was some alien shenanigans many years ago and there was a TV show based on it that lasted about three seasons.

I found the museum to be very interesting. It was set up like a timeline, similar to the 9/11 Museum, but less crowded. There were different interviews, video clips, and articles all about the 1947 Roswell Incident. 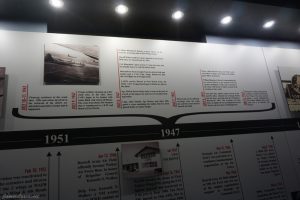 The second half of the museum was a bit more cheesy? They had cheesy alien displays. They also had a lot of stuff about UFOs and pictures of UFOs, pics/interviews/letters from people claiming they saw a UFO/were abducted by aliens, and things like that. 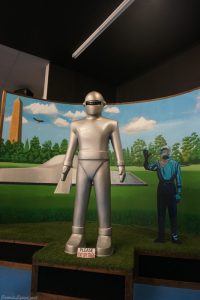 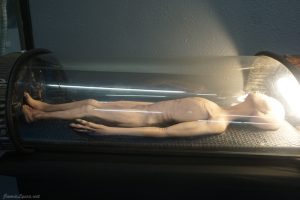 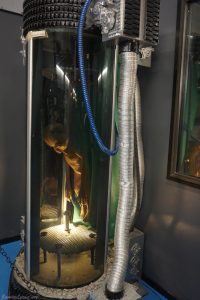 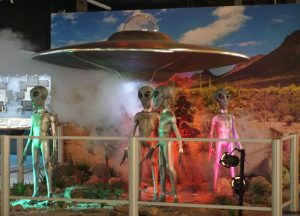 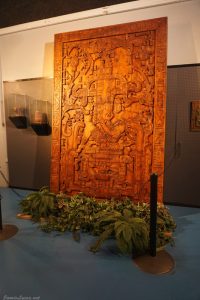 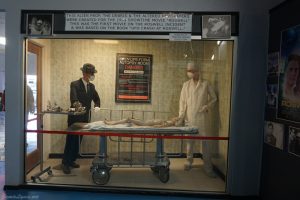 But like I said, I really enjoyed the museums, especially the part where it talked about all the conspiracies surrounding the Roswell incident. The museum is definitely worth a visit. It has free parking, the tickets are five dollars each and good for all day. Justin and I spent a good two hours in there reading every last thing, listening to every last video-clip, and we thought it was really interesting. It has a cute gift shop attached to it too. I got some plush aliens, some postcards [some of which I sent, others which will probably be sent months after the fact], and some magnets. We browsed a few of the other stores near the museum, but they didn’t really have any souvenirs that either of us was interested in.

I’m not really sure how I feel about aliens, to be honest. I mean I’d hate to think we’re the only “intelligent” species in the entire universe. But at the same time, if there really is an advanced alien civilization, and they have the technology to make to Earth, they’re leagues ahead of us technology-wise and I can’t really fathom that they’d have any use for us as a species unless they just want to watch us or do more aggressive things such as enslave human beings as pets or something. But I do enjoy conspiracies and things. 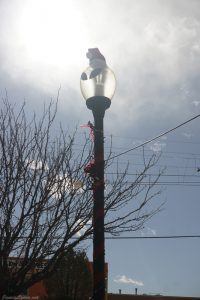 Justin wanted to go to a themed restaurant for lunch, as in a place that had some sort of alien-themed meal or whatever. We wound up at a small diner called The Cowboy Cafe. It was tiny, there were maybe nine tables in it, and we had to wait like fifteen minutes for a table, but it was totally worth it. Justin had the “mothership” burger. They also had an “alien omelet” that had green alien sauce on it. I just had chicken fingers and an apple pie ala mode for dessert. The food was absolutely delicious and tasted amazing after basically eating nothing but pop-tarts and freeze-dried food for a couple of days. 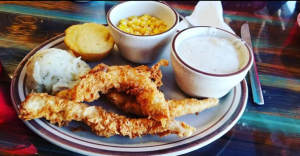 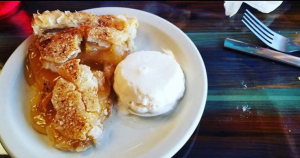 After we ate, we drove to the local post office to mail some postcards. Then we headed back to our KOA.

The wind had died down by then and it was a bit more pleasant outside. We ended up spending a few hours in the rec center, using the wifi, and playing our switches. Then we went back to the cabin, had a freeze-dried turkey dinner camping meal and we started packing the car because we wanted to leave pretty early to drive back to Texas the next day. We played more switch until we eventually went to bed. We also made coffee since our Rtic thermoses literally seem to keep coffee warm for almost 24 hours.

The next morning, we got up, right as the sun rose, and started driving back to Texas. I don’t have much to say about the drive back. We were determined to make it back in one day because we wanted more time at home to recharge before school restarts on Monday, which meant it was basically a 12-hour drive, but more like 13/14 hours because of my tiny bladder. The highways home were boring. We played so much music that eventually I just got sick of music and we ended up listening to podcasts. We found a podcast of a playthrough of Pokemon Sword/Shield, which we both actually found interested. We got through about three episodes of that and will probably listen to more during our Florida trip in December when once again we get burnt out from music.

Coffee didn’t keep me awake. The 5 hour energy drink I chugged only gave me energy for maybe one hour or so. I was so close to passing out during the drive due to exhaustion and the monotone scenery throughout the drive. I found the podcast did better to keep me awake because I have to pay attention to what people are saying, which keeps me more alert than listening to the same songs over and over again.

Eventually we got home around 7 pm. The cats were happy to see us.

It was a good trip. It was a good length because it still gave us time to relax and we didn’t have to go back to school right away. We both had a good time.

Our next trip is coming up in December. We’ll be driving to Key West after Christmas, taking the Yankee Freedom over to Dry Tortuga National Park, and primitive camping on the beach for three days. That should be a lot of fun and really interesting.

I’m glad we finally got to Carlsbad Caverns and Roswell because they were both places that Justin really wanted to visit, and he had a good time. Both places are definitely worth a visit, and I’m glad we crossed them both off our list.

And that was that.