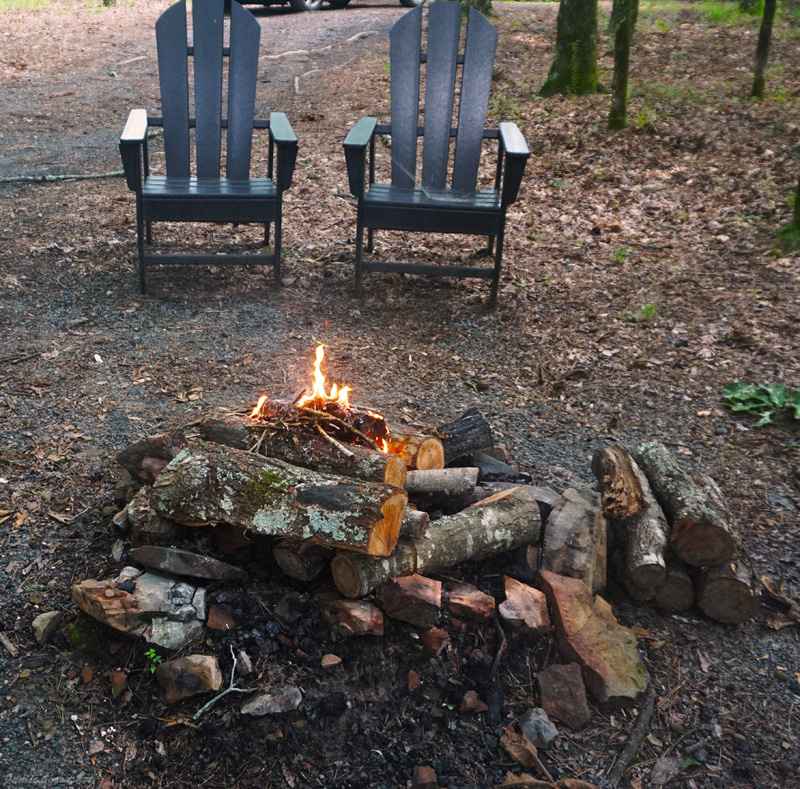 If you’ve been reading this blog for a while, then you know that one of my life’s goals is to visit all 50 states in the United States and to be honest, I’ve been doing pretty well. 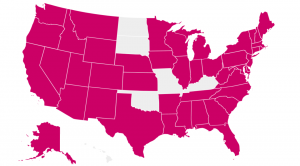 But I hadn’t ever visited Oklahoma, which seemed sort of crazy since Oklahoma is literally just above Texas.

That being said, Justin and I have basically been stuck in our house since March, when the COVID outbreak started, and we just needed a break. But we wanted a socially distanced break. I was randomly googling “cool places to stay in Oklahoma” over a month ago, and one of the suggestions I found was the River’s Edge Cottages in Watson, OK.  It’s pretty much glamping to the max. They offer several different cottages for both couples and families and then they have activities like kayaking, canoeing, biking, hiking, and swimming. The cottages are also about 1/2 a mile [or more] apart from each other, which meant the chances of us seeing people were pretty low. I showed the pictures to J, and he was sold, and we decided to do it. I booked the Mountain Escape for us. I booked the cabin in May. All the cabins for that week were sold out within a week of me booking ours. So, if anyone wants to travel here after reading this, I urge you to book it AS SOON as you decide on a date. We also decided EVEN BEFORE we visited it, to go back in November for Thanksgiving because it wouldn’t be so hot and we could do more, [spoiler alert: The southern summer temperatures are unforgiving, we basically sat around our cabin and just spend time together, and it was awesome] and I ended up booking The Bear Cottage for Thanksgiving…. and well, every single date is sold out during Thanksgiving week, so I’m glad I booked it when I did. Not only that, it finally let me cross Oklahoma off of my states I need to visit so I can join the 50 States Club [I’m an associate member, at the moment, with 45/50 states visited. I think we’re hopefully aiming for Hawaii in 2022, and the rest are somewhat driveable] and get my certificate and pin.

We spent two nights there.

We left on July 5th, and of course, every road trip needs a mascot. 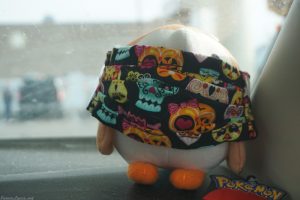 The drive from Texas to Oklahoma really wasn’t too bad. We ended up taking my car, due to Justin’s alternator dying, which isn’t the ideal car for road tripping because my car is tiny… but whatever.

Before we left, we stopped at the Kolache Factory to get some brunch. I had my favorite creamed spinach kolache.

The drive was pretty straight forward. It went through a lot of tiny towns in East Texas that had less population than my school does. We’ve driven out of Texas, many different ways. We’ve gone West on I-10, which goes all the way to El Paso, We’ve gone East on I-10, which goes through Louisiana to Florida, and we’ve gone North on 45 to Dallas and then a bunch of shitty boring back roads on 287 to Amarillo, and we’ve taken 27 south from Amarillo to Lubbock, rode on 87 through San Angelo to 190 to College Station and back to Houston… This time we went North on 59 to 259 to get to Oklahoma and it was one of our favorite ways to leave Texas. Honestly, the drive to and from the cabins to our house wasn’t too bad, just it always seems longer going home because we’re eager to get to the kitties.

The weather was pretty schizophrenic as we drove from Texas to Oklahoma. It’d be sunny for like fifteen minutes, then hard rain, then sun, and then drizzling, and that pretty much lasted until we got into Oklahoma. 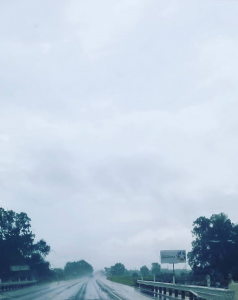 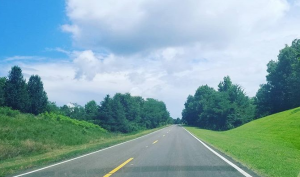 The roads weren’t that crowded. We felt safe when we stopped to get gas and things. We both wore masks. Justin used disposable gloves to fill the car with gas. I used gloves when I went to the bathroom to minimize touching doors and things [I’d usually go in with two pairs of disposable gloves] and threw them out before reaching the car. We would sanitize after every stop with hand sanitizer. Most places weren’t very crowded and almost everyone we saw was wearing masks.

We got the cabin around 4. The office only let one check-in happen, at a time, and we saw several people wearing masks. We drove to our cabin, which was an adventure because we had to drive up this step and rock hill, in my tiny ford. But we made it. 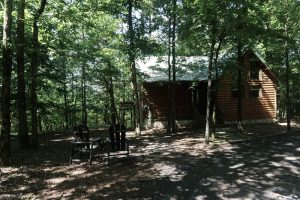 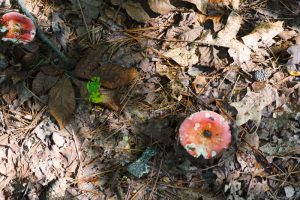 The cabin was super cute on the outside and on the inside. 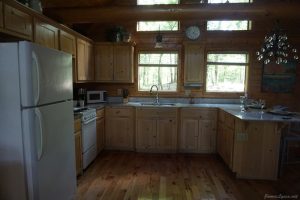 It had almost a full kitchen. The only thing missing was a dishwasher. It even had sugar/fake sugar, which was great because I had totally forgotten to pack fake sugar for my iced tea. They provided dishes and any utensil/appliance you could think of including a crockpot. They had tea, coffee, hot chocolate, and popcorn. The fridge/freezer was also full-size. 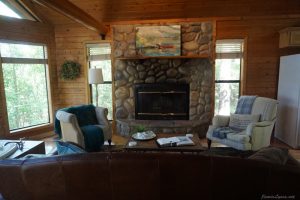 I pretty much spent the entire trip lying on that couch, which was SUPER comfortable and reading. It wasn’t fireplace season, which was sad, but it will be in November, and I plan to basically repeat what I did on this trip, only in front of a fire. 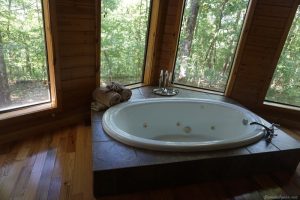 There was a jacuzzi tub, which Justin enjoyed more than me. I HATE BATHS. But he said the tub was very relaxing and now wants to find bath bombs for his next trip to extend the relaxation. 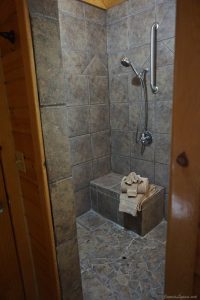 The walk-in shower with the two shower heads was amazing and pretty much what I want to do in the master bathroom of our house. I want to get rid of our unused garden tub and extend our shower into a huge double walk-in shower. 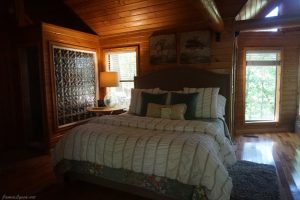 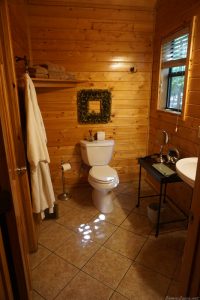 The bed was king-sized and very comfortable. And the bathroom is just a bathroom? 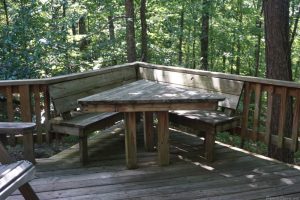 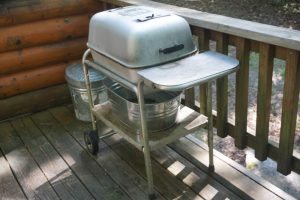 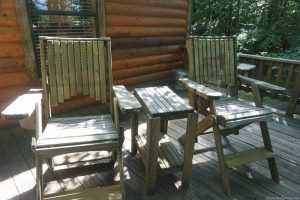 There were places to sit on the back porch and a grill. Unfortunately, it was far too hot to really take advantage of the back porch, but we will in November. 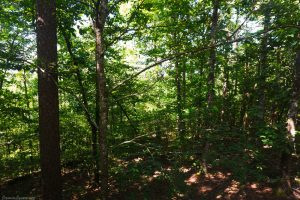 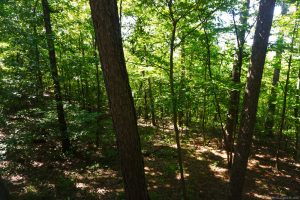 This was the view from the back porch and behind the woods are mountains, though you can’t really see it in the picture. We also saw a baby deer in the woods when we got there.

The second we got there, I decided to read, and Justin wanted to play Survivor. I read three books and started a fourth while I was there.

The first book I read was My Dark Vanessa which is probably my first five-star book of the year. It’s a really dark and disturbing book about rape, sexual abuse, and gaslighting. The book was heartbreaking and depressing but in a good yet extremely disturbing and horrific way.

The second book I read was The Language of Cherries. It’s about a girl named Evie, who is in Iceland for the summer. There’s not very much to say about it. I’d probably give it three stars. I enjoyed it, but it wasn’t an amazing book. It’s of the tween romance genre.

The third book was The Beauty That Remains which is a book about teenagers dealing with grief. It’s about how they heal and try to find themselves after losing people they were close to. I’d also give this book three stars and would call it another tween book.

I started Daisy Jones and the Six but didn’t get very far in it yet, and it’ll probably be put on hiatus for a while because THE NEW DRESDEN FILES comes out on Tuesday and that is all I can think about.

While I was reading, Justin decided to play Survivor and light a fire in the firepit using only flint and his version of coconut husks. 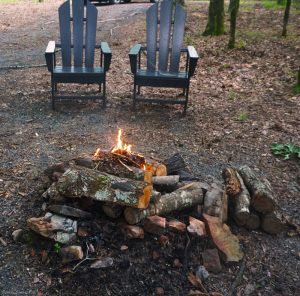 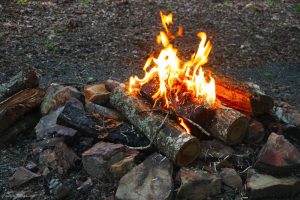 He was very proud of his fire.

That night, for dinner, Justin cooked us cheeseburgers on the grill and we made s’mores for dessert using Justin’s fire to toast the marshmallows. 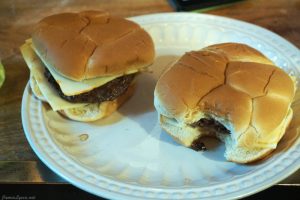 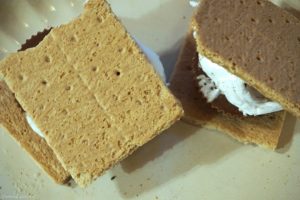 I spent the rest of the night reading. Justin took a very long and relaxing jacuzzi bath and then read some of my She-Ra and the Princesses of Power graphic novel I had brought with me.

The next morning, we got up and made our version of a breakfast scramble for brunch: 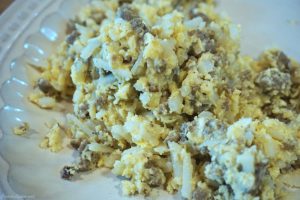 [turkey sausage, hash browns, eggs, and cheese scrambled all together]

I know I sound like a broken record, but I spent the entire day reading. It was what I needed. Justin attempted to do a 1000 piece puzzle but got annoyed when it took to long to organize the pieces and stopped shortly after he had started. After I finished reading my two books, we grilled skirt steak on the grill and used the garlic BBQ sauce aforementioned several paragraphs up, and some mashed potatoes by candlelight with some wine. 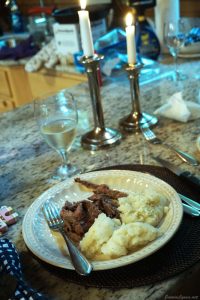 We toasted some marshmallows on the grill and made more S’mores and spent the rest of the night talking and playing Pokemon on our switches.

The next morning we got up and headed back to Texas. 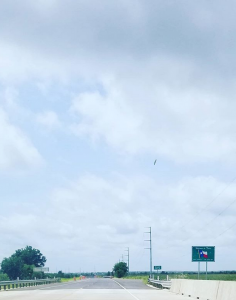 As I said, we didn’t really do much, but it was amazing just to disconnect from the craziness of the world around us and that was just what we needed.

We’re both very excited about our return to River’s Edge in November and cannot wait to experience more of the outdoorsy things that it offered.  And I’m also excited I could finally cross Oklahoma off of my list of states that I needed to visit.

And that my friends, as they say, is that.