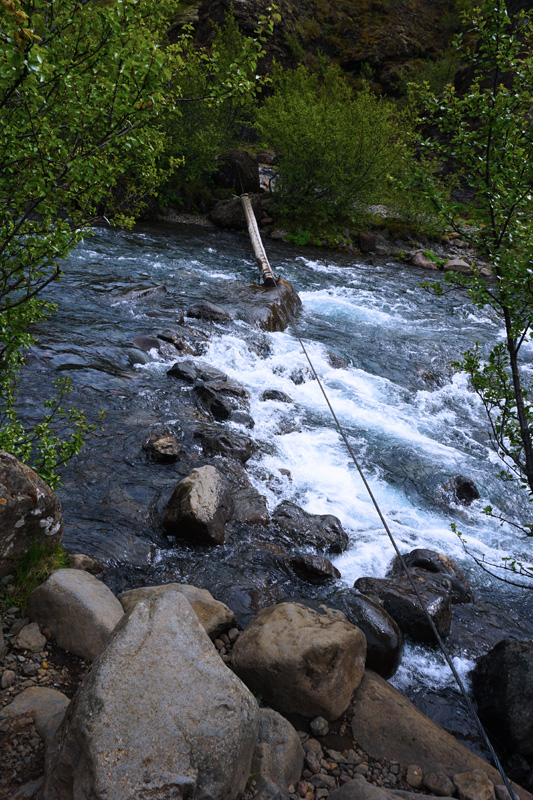 It’s been a while since I’ve updated you about our Iceland trip from June. The last few months have been insane for me. I was balancing two classes for graduate school, teaching at my school, and trying to have a social life, and epically failed. I dropped down to one class this semester and feel like I have a slightly better balance of work time, school time, and free time, and I am determined to finish updating about Iceland before our Thanksgiving trip in three weeks. On the bright side, there’s only one more day to write about after this one, so I should be able to pull it off.

The night before we had been trying to google blogs and hiking websites to see if we could handle more moderate hiking. We had been contemplating hiking to Glymur since before we left on the trip but knew that the hike was going to be more challenging than other hikes we have done. We also had a lot of time to kill before we could check into our Air B&B, so we decided we would drive to Glymur and look at the hike, in person, and try to figure out if we thought we could handle it.

We got to Glymur around 11 am or so. When we got there, the parking lot was not very crowded. But it was also a drizzly, cold, and rainy day, which might be keeping crowds away. We also visited in June, which is before the high tourist season. One advantage of going in summer is that there are 24 hours of daylight, so technically, you can hike at midnight and it’s still light out, which is always good for slower hikers like me. We got out of the car and looked at the map of the hike: 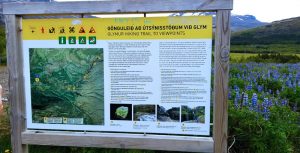 (It’s been a while, and I’m not sure which pics I’ve chosen to use are from my phone or camera)

Justin decided that the hike didn’t look too bad and thought we could handle it, so we headed towards the gate. He didn’t think the hike looked that long or challenging. 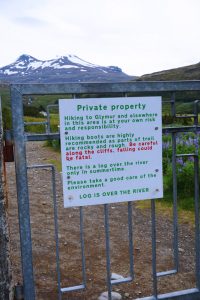 Part of the Glymur hike includes a river crossing that’s done by crossing a log and a wire. The log is only down during the tourist months, if you are hiking outside of the tourism season, you need to find another way to cross the river. The log was over the river when we went hiking.

The first part of the hike really wasn’t too bad. The trail was mostly flat with a few small hills and some very shallow stream crossings.

The trail for Glymur is pretty clearly marked, though it is also easy to get lost because there are a lot of little pathways that look like part of a hiking trail. We even had a woman stop us while we were hiking that part of the hike to ask us how to get back to the parking lot.

The next part of the trail brings you closer to the Botnsá River.

Then we hiked through a cave. This is the Þvottahellir Lava Cave, or ” Wishing Cave.” 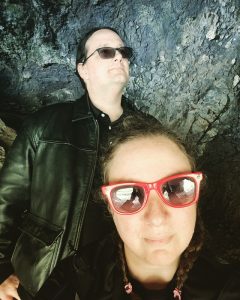 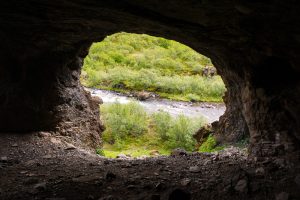 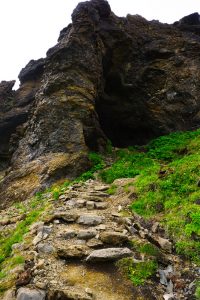 (Note: We swore we were going to use that last picture on our Christmas Card this year, but I’ve already made the card, and there were much better pictures of us. Regardless, it looks like the cover of a cheesy rock album, think Faith Plus 1 from South Park.)

From the cave, we hiked to the foot of Botnsá River. 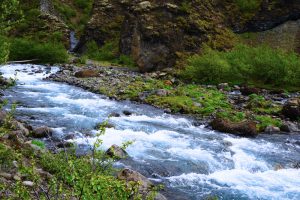 You can vaguely see the first river crossing in these pictures.

Next, we got to cross the river using only wire and a log. 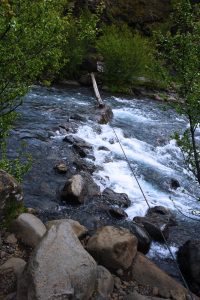 Justin crossed the river first. I was terrified to cross the river. I am a klutz and I have extremely bad balance, and I was worried I would lose my balance and land in the river. I went to a haunted house once with one of my friends in NJ, and there was an optical illusion room where it seemed like the room was spinning, but it was not. It took me about thirty minutes then to get to the other side of the room because I was convinced the room was moving. It took me a while to be ready to attempt the river without freaking out too. I made Justin hold my phone and camera because I was worried I would fall into the river and break them both. I am not sure if the river would be considered average, high, or low when we were there. June tends to be the rainier season in Iceland, and we did experience a lot of rain, so I’m going to assume it was a bit higher than average?

I did manage to make it across the river without falling in. My hiking boots did get wet because the water was over the bigger rocks near the wire before the log, but not too wet. The rocks were very slippery and there is only a wire to help you stabilize. I had extreme anxiety the entire time.

After the river crossing, I’m pretty sure we were both running on adrenaline and did not feel tired as we continued the hike.

Next up, we had to hike up the cliff. The trail was very narrow at times and very close to the edge. I am not afraid of heights and did not have any issues with this. There is also some very steep uphill hiking. There is a wire to assist you as you ascend up the cliff, but it was very strenuous, and I found myself having to sit down for a few minutes at a time to sip water.

Eventually, you get closer and closer to Glymur. There are a few shallow stream crossings here as well. 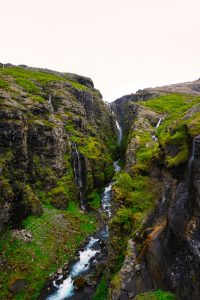 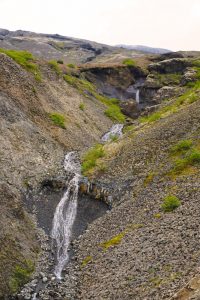 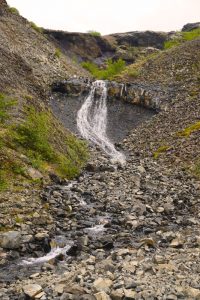 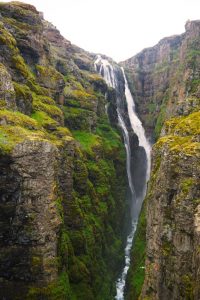 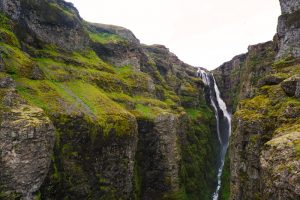 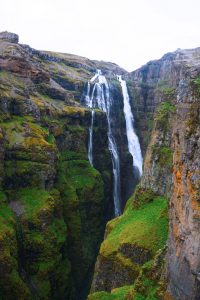 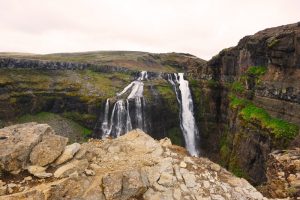 Eventually, we made it to the top of the waterfall.

Here’s where we made a mistake. We should’ve turned around here and gone back the way we came, but instead, we thought it would be a good idea to do the loop and hike past the summit of the waterfall and cross the river.

As we got higher, I got pretty sick. I had altitude sickness. I felt nauseous, I had a horrible headache, my entire body ached, and I was freezing cold.  I was also extremely irritable.  I had to sit down almost every few feet because I would be too dizzy. This is when I was contemplating killing and/or divorcing Justin because he claimed this would be an EASY hike.

It probably took twice or three times as long as it should have, but eventually, we got to the river crossing.

In order to get back to the parking lot, you need to either cross the river by foot behind the falls or loop back around and cross the log.

There is no log or anything to assist with crossing the river, we had to wade through it. The water was extremely cold. And the river was pretty high. I think the water was up to my knees at some point, but I’m also short. The river bottom was very slippery.

The descent was easier than the ascent, but I was hiking in wet clothes, and wet hiking boots, and extremely uncomfortable. I was also so exhausted.

We eventually made it back to the parking lot. I think the entire hike took us about 6 hours. Mostly because of my breaks.

I was super proud of myself for completing the hike, but it was extremely challenging and tiresome. I don’t think I would ever do it again, but it was worth doing at least once, I suppose.

We started driving towards Reykjavík. I was starving after that hike. I think I ate an entire chocolate bar in the car.

Our lodging for the rest of the trip was a small cabin outside of the city. 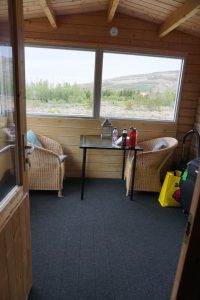 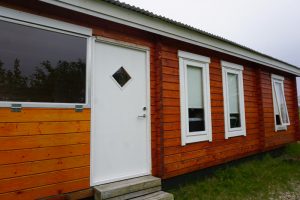 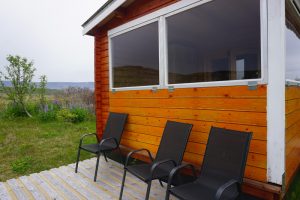 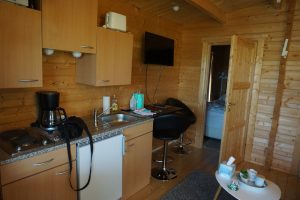 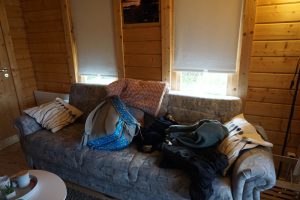 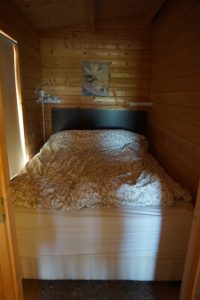 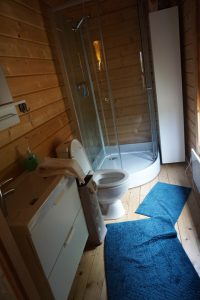 The things I really liked about the cabin included the couch. I spent a lot of time on that couch (consider that foreshadowing). There was a large TV that we were able to connect Justin’s laptop to, so we got to watch a lot of Bojack Horseman and Bob’s Burgers during downtime. The kitchen was also one of the nicer kitchen setups at the places we stayed.

The one thing I didn’t like was the shower. The shower was little and there was very little hot water. I like very hot showers, and I barely got lukewarm temperature water at the cabin.

I was starving when we got to the cabin, so I made myself a sandwich.

Think about this for a second. We drove from Borganes in the morning to Glymur and the hike took 6 hours and then we had a 45ish minute drive to the cabin. The meat I made my sandwich from came from Borganes.

Anyhow, after I made a sandwich and devoured the sandwich, Justin and I settled for the night and started watching some Bojack Horseman until around midnight.

I tried to sleep in the bedroom, but my stomach hurt. To make a long story short, I got HORRIBLE food poisoning from the lunch meat I had made my sandwich from. It had been in a car, in a parking lot, for several hours, and I didn’t even think about that. I spent the entire night alternating between the bathroom and the couch and got no sleep, at all.  This continued through the next day.

Needless to say, the last days of our Iceland trip were off to a rough start.